Home » Beauty » Hair tinsel: How to get the festive hair trend perfect for Christmas 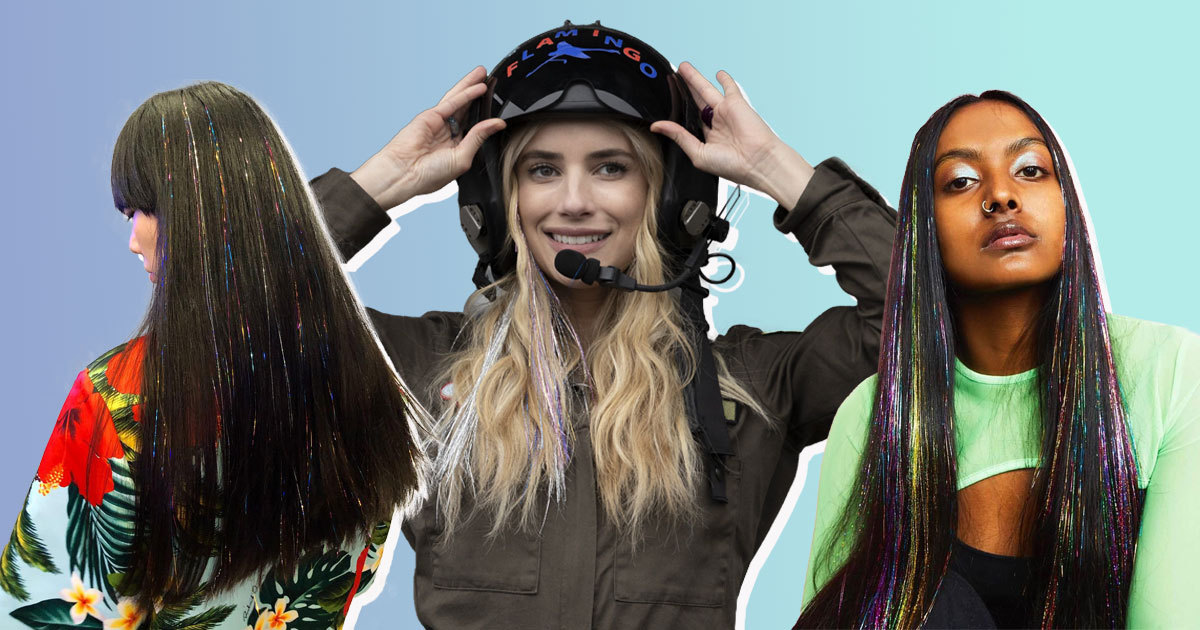 You’ve bought the Christmas jumper, the red lip is on, and you’re sporting the sparkly nail polish.

But now, you want to add a touch of festive glam to your hair. Enter, hair tinsel.

Before you recoil, we’re not talking about wrapping some Christmas tree tinsel around your ponytail and calling it a look.

Think more subtle individual strands of tinsel from root to tip, spread out amongst your locks that give your hair a glittery – and slightly extra – touch.

While hair tinsel has been getting popular lately, it’s not actually new.

In fact, Queen Bey herself wore gold strands to the 2010 Grammys – which was, gasp, almost thirteen years ago.

Since then, Katy Perry donned them for her Las Vegas residency, and Emma Roberts was most recently seen wearing hair tinsel during the trailer for her new Amazon Prime film, Space Cadet.

So how do you go about achieving this Christmassy look?

Nicole Petty, hair expert at Milk + Blush says it’s not as hard as it looks.

‘Start by wrapping the tinsel around a few strands of hair close to the root and securing it in a slipknot.’

For those who might be scratching their tinsel-less head at this point, a slipknot is just a knot that ties around the material its made with.

Next up, you need to keep your tinsel in place.

Nicole says: ‘To ensure the tinsel doesn’t slip out of the hair, wrap the hair around it and pull it tight. Do this on both sides to ensure it’s secure. Finally, add two more slipknots around the root to keep the tinsel in place.’

Alternatively, you can go for a longer-lasting look, but you’ll need some tools – a loop tool and hair extension pliers, both of which can easily be purchased online.

Nicole says: ‘You can add the hair tinsel to silicone beads by tying multiple tinsel strands onto it with two slipknots.

‘To get the beads onto the hair, fit your loop tool with the silicone bead before looping the hair through it, guiding it up to your root and securing it with the hair extension pliers close, but not on, the root.

And if it’s a block effect you’re after, you could even try creating some tinsel-tape-in extensions – if that’s the case, Nicole says you should go to your hairdresser.

‘Ask an extension professional for assistance in fitting these, as doing it yourself could damage your natural hair,’ she says.

It’s easy for this look to go wrong, so Nicole says consider your options.

She explains: ‘If you’re worried about it looking a bit cheap, then ensure you carefully consider the method. For example, if you want a month-long new look, go for the silicone beads or tapes, but if it’s just a one-night thing, add a few strands yourself.

‘Additionally, try only adding one or two colours to your hair for a subtle yet stylish way to accessorise your hairstyle.’

Luckily, there are also heat-resistant tinsel offerings, so you can change curl and straighten your locks without any problems.

Selena Gomez's Rare Beauty to launch in the UK

A Beginner's Guide to Resistance Training