Kate Middleton has stepped out for a royal engagement in a stunning outfit, one day after the royal family added another member to the fold.

The Duchess of Cambridge wore a nautical outfit for the launch of the King’s Cup, a regatta in August that will raise money for eight of Kate and Prince William’s charities.

Her appearance comes just one day after brother-in-law Prince Harry and Meghan Markle welcomed their first child, a baby boy.

The Duke of Sussex shared the news via a televised interview and revealed the happy couple would be introducing their newborn son to the public in two days time. 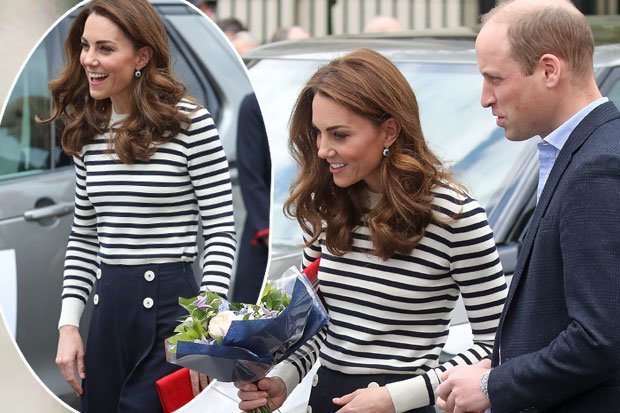 Kate wore a blue and white long sleeved top for the event, which she paired with navy culottes and blue suede shoes.

She accessorised with a red clutch bag and wore her hair in her signature bouncy blow-dry.

Kate was joined by Prince William, who lovingly discussed his newborn nephew for the first time.

The Duke of Cambridge said he was “absolutely thrilled” about the birth of the Duke and Duchess of Sussex’s son, adding he was “looking forward to seeing them in the next few days when things have quitened down.”

Kate’s outfit – no doubt a nod to the royal baby as well as the event – went down a storm with fans.

It’s rare to see Kate in culottes, as the mum of three often opts for dresses and skirts, choosing high-street jeans when she does wear trousers.

Those on social media were raving about Kate’s look, with one labelling the Duchess “gorgeous” and another “stunning.”

“Her best look,” wrote one fan, while another added: “She looks absolutely stunning.”

Kim Kardashian’s Gorgeous Bronze Glow At PCAs: Makeup Artist Shares How You Can Recreate Her Look