By the time he turned 25, Josh Gates had reached a breaking point. He could either figure out how to manage his Crohn’s disease, an uncurable chronic inflammatory bowel disease that was sending him to the hospital “nearly every week” for dehydration from vomiting, or, in his estimation, he was going to die.

Gates had been living with the condition since he was 11 years old, and as he got older, nothing seemed to help. “I struggled to eat because food caused intense stomach pain and frequently resulted in me vomiting,” Gates, a 27-year-old tech worker from Austin, tells Men’s Health. “I was incapable of keeping much food down, so my weight stayed very low and my body basically stopped aging. No meds or diets seemed to help, so all of my teenage and young adult life resulted in me looking like an 11-year-old and being under 100 pounds, even at 5’9″.” Gates estimates that he was only able to consume about 500 calories a day from the time he was 11 until he was 25.

Since so much of his energy was spent struggling with his health problems, other areas of his life suffered, too. Gates says that he had “terrible body image issues,” and he had a hard time dealing with how frequently people commented on how skinny and young he appeared. That carried over to his social life. “I couldn’t get dates much less a girlfriend, and even basic friendships were difficult because of how sick and terrible I consistently felt,” he says.

As he entered his mid-twenties, his condition became unmanageable. “Most of my worst moments were between the ages of 23 to 25,” says Gates. “[I was] constantly faint, cramps in multiple muscles if I just happened to move that muscle at the wrong angle. Multiple points of having to take myself to the ER because I felt like I was on death’s door.” 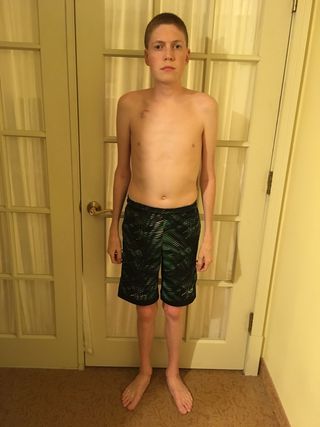 Gates decided that he’d had enough and took his health into his own hands. He booked an appointment at the Mayo Clinic in Minnesota, and the doctors there decided that surgery was the best treatment plan. In October 2017, he underwent a gastrojejunostomy, a procedure that connects the stomach and jejunum (part of the small intestine), and a 20-inch resection of his small intestine. He spent 10 days in the hospital to recover—then it was time to take back his life.

Gates immediately gained weight after the treatment. He went from under 100 pounds to 120 pounds in five months on a normal diet alone. By then, the scar on his chest had healed and he was given permission to exercise from his surgeon. Gates threw himself into a fitness routine, mixing thrice-weekly Orange Theory HIIT sessions with dumbbell workouts in his apartment’s gym he put together on the Fitbod app, checking on YouTube videos and exercise literature to make sure his form was correct.

A few months later, a friend introduced Gates to running, and he added that to the schedule, too. Friends and family were initially surprised at his newfound commitment to working out, but Gates knows exactly why he’s now such a gym junkie. “[My] motivation was mostly self-discipline that stemmed from me finally having the opportunity to control what I looked like,” he says. “I hated so much what I looked like for 14 years and I really wanted to get to the point where I can see myself in the mirror and don’t hate what I see.” 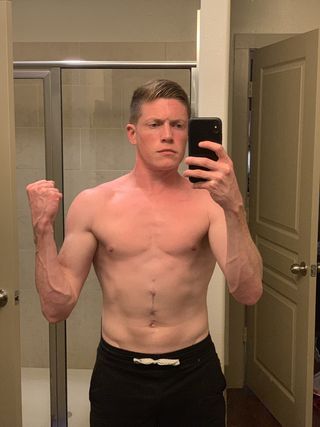 A year after the procedure, Gates had bulked up to 135 pounds—but he wasn’t satisfied. He cut out the Orange Theory sessions and dialed down on the weight room and running. He crushed a half marathon in Austin this January, then decided to concentrate on gaining even more muscle. He joined a proper gym and embarked on a five-day workout split, then started eating 3,500 calories a day to help pack on the mass. Now at 148 pounds and 12 percent body fat, Gates tracks his progress on Instagram as he works to hit his goal of reaching 160 pounds at under 10 percent body fat and logs miles for his upcoming marathon.

On February 19th I was deadlifting sets of 95 lbs. Less than three months later I’m lifting sets of 175. Super happy with the progress I’ve been making this year. Shoutout to @jeremyethier for the great training plan and @jeffnippard for the on point technique videos. #workout #deadlift #lifting #weighttraining #weightgain

Life has entirely changed for Gates. Along with the immediate physical benefits of having his condition under control, like feeling strong and energized, he’s gained even more in the intangible areas he felt were lacking before.

The 13 Wildest Beauty Gadgets of 2019 Are So Good, They'll Change Your Routine Forever

The Best Drugstore Beauty Buys of 2019