Jurors in the Johnny Depp-Amber Heard defamation trial will return to court on Tuesday. Jurors have spent six weeks listening to testimony and viewing evidence. They aren’t the only people hyperfocused on the trial, though. The saga has garnered interest across the globe and has served as a source of social media content and gossip fodder since it began. A verdict, which could be just hours away, will finally put this entire spectacle to rest. Before that happens, let’s review three viral moments from the legal proceedings.

All couples fight, but most don’t defecate in the bed in retaliation. That’s what Johnny Depp claims Amber Heard did. According to Depp, Amber Heard took things to a completely bizarre place after one particularly intense argument. According to Depp’s testimony, Heard defecated on Johnny’s side of the bed when he opted to leave the house after an argument. During his testimony, Depp said, “My initial response was, I mean, I laughed. It was so outside, it was so bizarre and so grotesque that I could only laugh.”

Heard insisted the dogs were to blame for the feces. Social media users seem to believe Depp’s version of events. In the wake of the testimony, Depp supporters have nicknamed Heard “Amber Turd.” According to TMZ, Heard’s name on IMDb was also briefly changed to Amber Turd.

TikTok users have picked apart the Johnny Depp-Amber Heard defamation trial in painstaking detail. Still, one of the most viral moments has very little to do with domestic abuse, defamation of character, or even Depp and Heard’s troubled marriage. Instead, social media users want to know why Heard opted for such a pained expression after explaining that her dog stepped on a bee.

In the now-famous clip, Heard spoke about a particular evening with Depp. She then launched into a story about her dog stepping on a bee. After the statement, she paused, perhaps for dramatic effect, and made a pained expression. The internet ran with the look because it seemed so out of place—thousands of people flooded TikTok and Twitter to make fun of the strange look.

Depp’s lawyer, Camille Vasquez, has made a name for herself during the last six weeks. Legal experts and the general public have praised Vasquez for her no-nonsense approach to cross-examination. Vasquez and Heard haven’t agreed on a lot, but followers can’t stop talking about how the lawyer and Heard, as a witness, battled over whether “donate” and “pledge” mean the same thing.’ 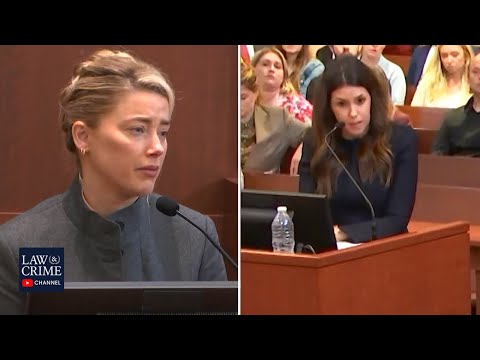 During her cross-examination, Vasquez made it a point to discuss how Heard had not yet donated the money she was awarded in her divorce settlement to charity. Heard famously stated that she would be donating the entirety of her $7 million settlement to charity. Heard repeatedly said she “pledged” the money, refusing to use the word donate. Finally, Heard claimed she uses “pledge” and “donate” interchangeably. Vasquez was quick to point out that the terms are not, in fact, interchangeable.

Kristen Bell opens up about husband Dax Shepard's relapse: 'I'll continue to stand by him'