Products featured are independently selected by our editorial team and we may earn a commission from purchases made from our links; the retailer may also receive certain auditable data for accounting purposes.

The headphones generated a lot of attention because of the success of the AirPods and AirPods Pro, and their $549 price. I’ve spent about a week with the headphones, and they do a great job combining the best features from AirPods Pro into a larger, much better-sounding package.

Because I use Apple devices, setting up AirPods Max took less than one minute. The headphones require you to be using an iOS device running iOS 14.3 or a Mac running MacOS 11.1, which were both released earlier this week. These headphones are only compatible with Apple devices, unless you use them with a cable, which I’ll get into a little later.

The iPad I used during my initial testing detected the AirPods Max within a few seconds of me taking them out of their box, and paired instantly. Once connected, I could start listening to music right away — no separate  app was necessary.

If you’ve connected your AirPods Max to one Apple device, it’ll automatically pair with your other Apple gear, which is a useful time saver.

A Decent Desktop PC Under $500? It's Possible, and We've Picked Four

All 173 of Taylor Swift's Songs, Ranked

Designed For Simplicity And Comfort 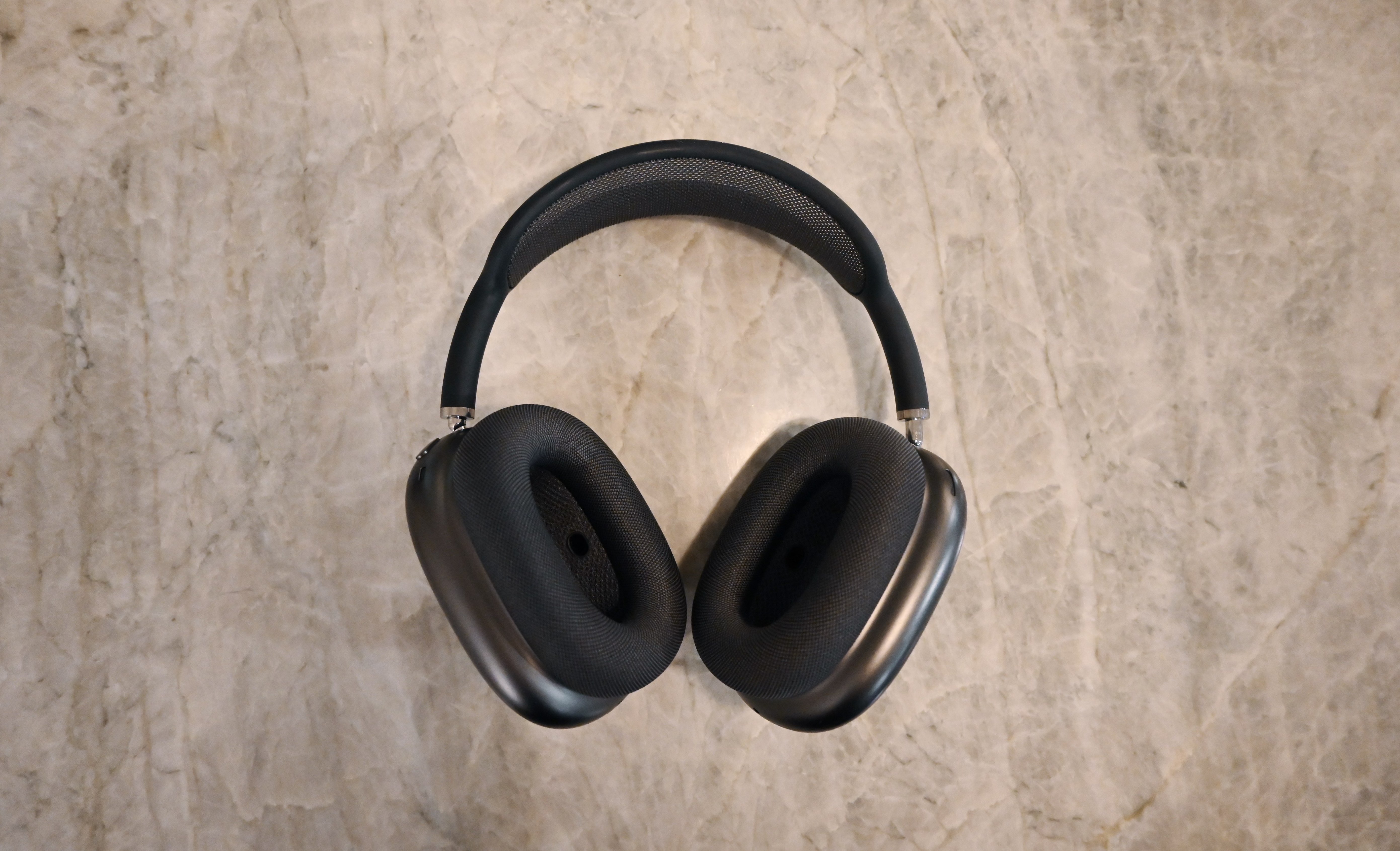 The AirPods Max follow Apple’s philosophy of making precisely designed, simple-looking gadgets. The outside of its earcups is made out of solid aluminum, with slim cutouts for microphones. Most of the microphones are used for active noise cancellation, but three are used to make your voice sound better during phone calls. I only took a couple of calls using AirPods Max, but nobody complained about how I sounded.

Its headband frame is made out of stainless steel, which smoothly glides if you need to adjust the headphones’ size to fit your head. This is a big upgrade over headphones with a thin, flimsy metal band, or plastic one that clicks into place. Simply put, AirPods Max look nice, which they should given their price.

These headphones only have two buttons: A larger version of the Digital Crown (originally on Apple Watch), and one to switch between noise cancellation settings. The Digital Crown works pretty well, but I barely touched it because it’s easier to make volume adjustments on my device. Pressing down on the button once pauses or plays your music, though, which is convenient if your device is far away. 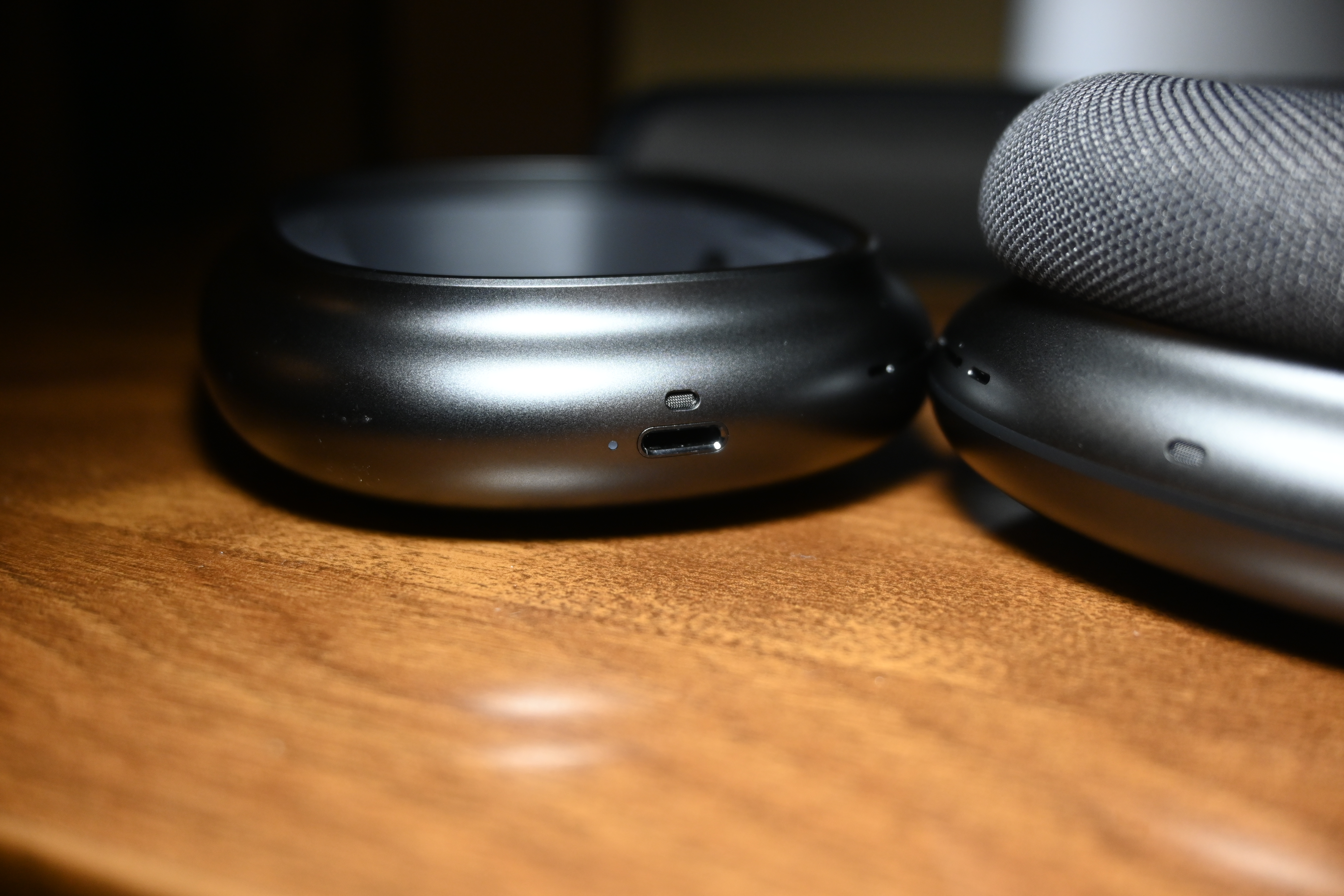 Apple’s only controversial design choice was sticking AirPods Max with its proprietary Lightening port. Most gadgets have moved on to USB-C, including Apple in many cases, but the company is stubbornly holding onto this connector for its headphones, entry-level iPad, and iPhones.

Because it doesn’t have a standard 3.5mm audio out, you’ll need a special $30 cable if you’d like to use your AirPods Max as wired headphones on a plane’s entertainment center or TV’s headphone jack. If you want a wireless solution to those two problems, you could also get Twelve South’s AirFly Pro, a wireless transmitter that works with all AirPods.

Apple says AirPods Max get up to 20 hours of battery life per charge, and that’s been my experience using them as my primary headphones for about a week. I plug them in for an hour or so every couple of days, and that gets me through long music and podcast listening sessions without battery anxiety.

I’m not very surprised by the look of Apple’s AirPods Max, but have been shocked at how comfortable they are to wear. Although they weigh nearly one pound (heavy by wireless over-ear headphones standards), the padding Apple uses on its earpads and headband are incredibly soft.

The top of the headband is actually made from an open woven mesh material that stretches to accommodate your head. I felt no pressure on my ears or the top of my head at any point during my testing, even when walking around, or up and down stairs. AirPods Max would move around, but I never felt uncomfortable wearing them.

If the weight or feel of over-ear headphones has bothered you enough to switch to earbuds or an on-ear pair, Apple’s design choice may bring you back. 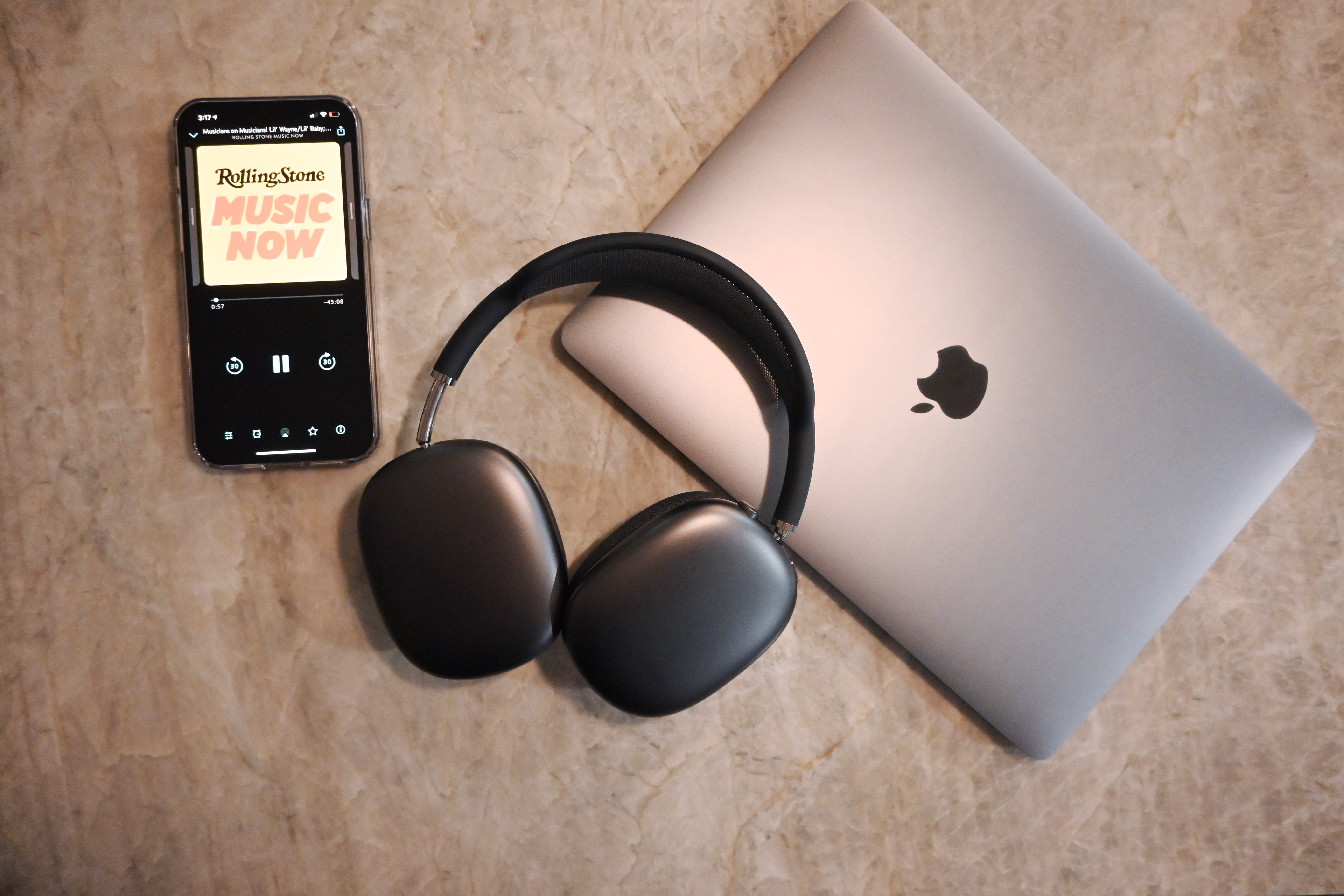 Apple had a lot to prove when it priced AirPods Max at $549 — up to $200 higher than its main competitors: Sony’s WH-1000XM4, Bowers & Wilkins’ PX7s, and Shure’s AONIC 50s. You can’t go wrong with any of those headphones — we’ve tried them all — but Apple has pulled off something really special with AirPods Max.

The company squeezed an impressive amount of audio performance from standard AirPods, but it’s clear the it could do a lot more with larger headphones. AirPods Max are the best pair of wireless headphones we’ve tested because of a mix of custom hardware and software Apple developed, and no other headphones can replicate.

Each ear cup has an inward-facing microphone and a 10-core processor, which allows headphones to use a feature Apple calls “Adaptive EQ”. Rather than letting you control how the headphones sound, AirPods Max will make micro adjustments several times per second based on your listening volume level and the track you’re playing. There’s no way to turn this feature off for a totally flat EQ, which I think would be nice, but the results spoke for themselves.

Because this feature is dynamic, AirPods Max were prepared for any track I listened to. The bass on A Tribe Call Quest’s What boomed without getting distorted. A guitar lick I’d previously missed on John Martyn’s Solid Air sounded as clear as the lead vocal track. One artist I returned to a lot during my testing was Bill Evans. I listened to most of his Live At Town Hall album during my initial preview period, and was struck by the presence of the audience when they clapped between songs. 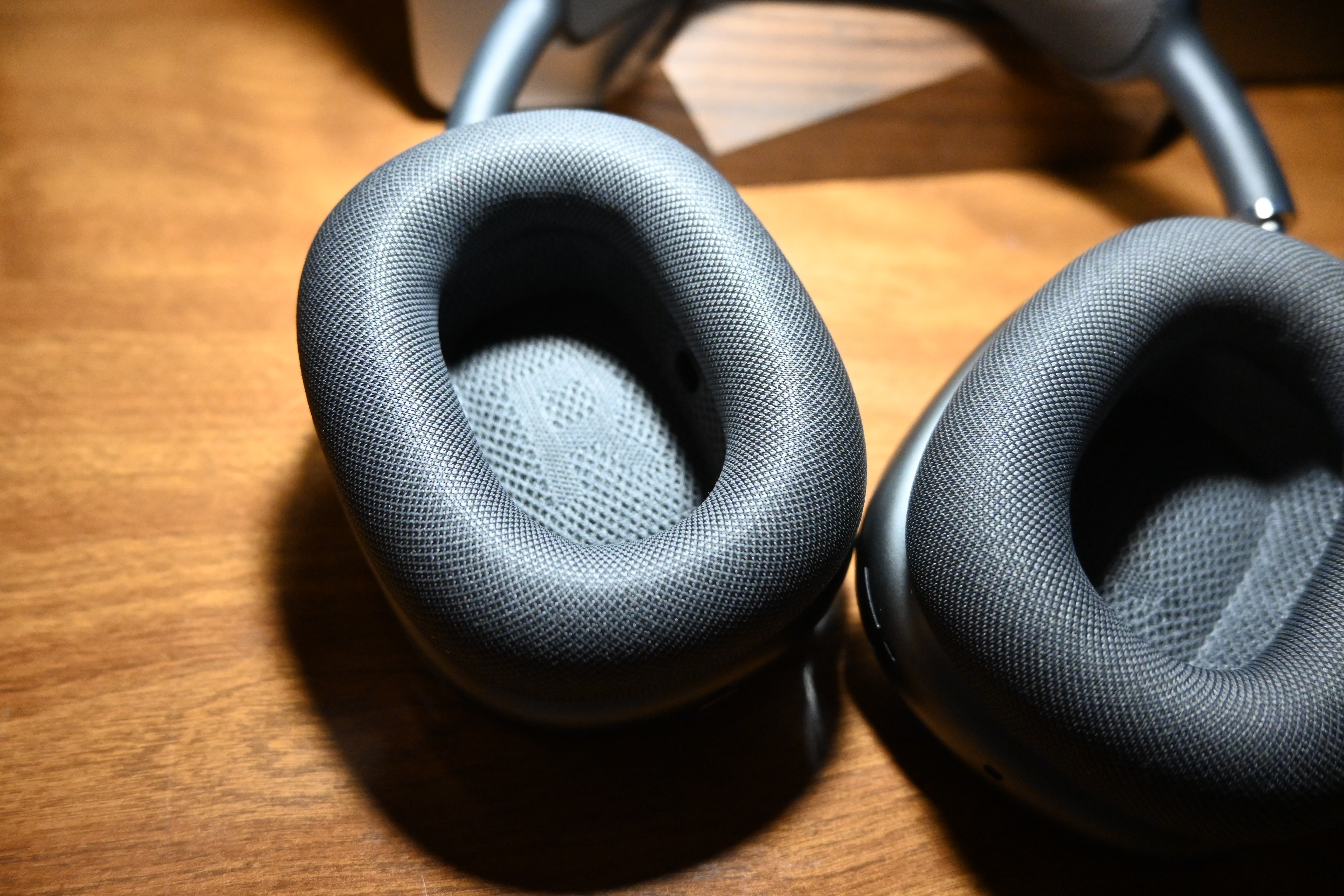 Listening to the song Minority from his LP Everybody Digs Bill Evans I could hear every hit on Philly Joe Jones’ drum kit during a fill. Fast tracks like that never sounded distorted or smeared, they always remained crystal clear, for better or worse.

These headphones will only sound as good as the source material, though, so if you’re listening to compressed files, or albums that’re mastered poorly you’ll be in for a rude shock. Bob Dylan’s Unplugged album fell flat on AirPods Max because I was able to hear the limitations of the recording.

Adaptive EQ deserves some of the credit for the way AirPods Max sound, but Apple’s custom-designed 43mm drivers do a lot of the heavy lifting. Each one features a dual-neodymium ring magnet motor, which Apple says reduces 99% of harmonic distortion. The guts of AirPods Max would sound great on their own, but Apple’s software optimizes it, so it’s prepared for every scenario.

Nothing will fully replace playing high resolution audio files on a set of high-end wired headphones connected to an audiophile DAC, but the proper setup requires multiple components and a lot more money. AirPods Max sound excellent, and can be taken anywhere. 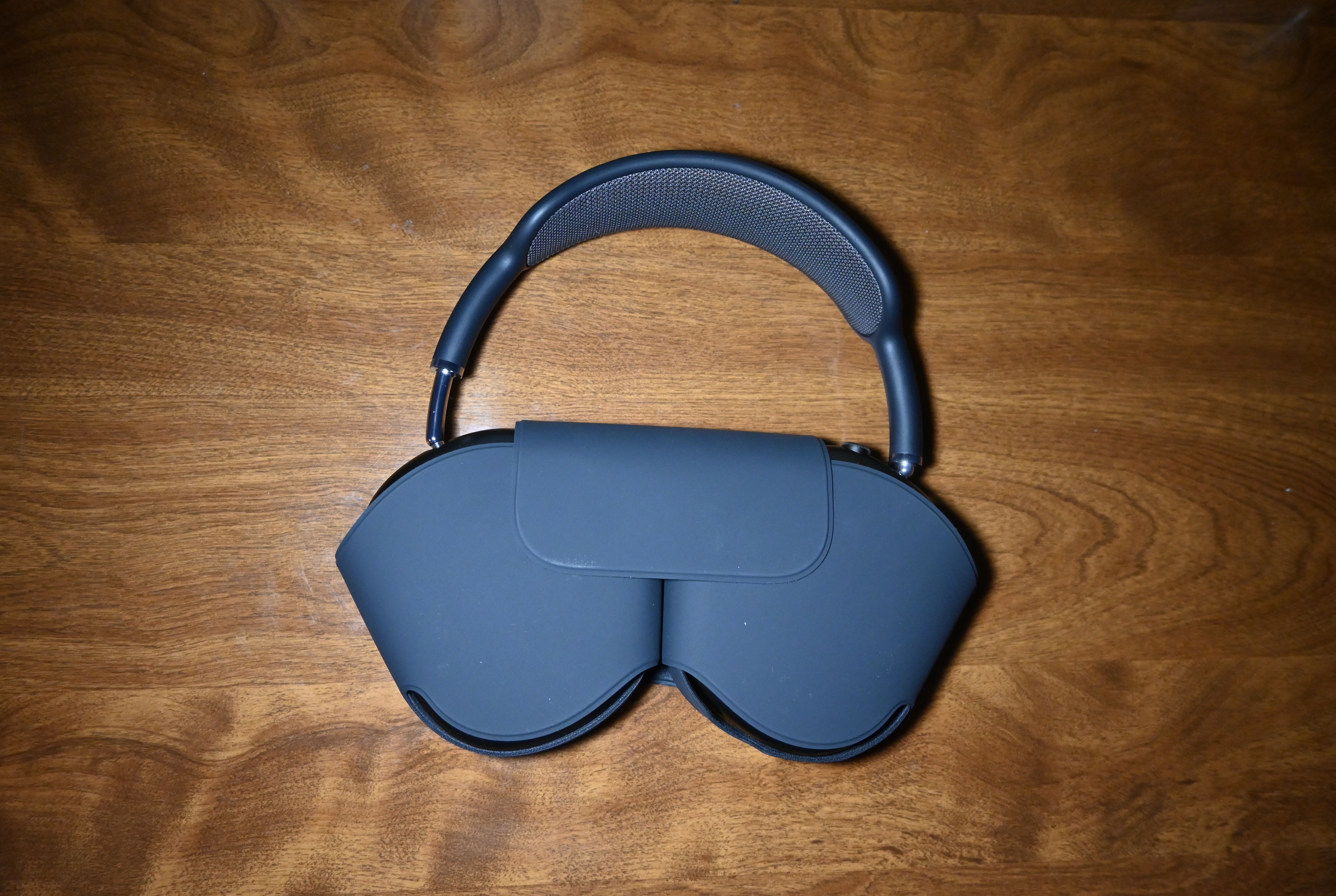 The AirPods Max are thoughtfully designed inside and out, but the case Apple includes with them is anything but. It only covers the headphones’ ear cups, leaving the band completely exposed. It looks awkward on its own, and things don’t get better when you put AirPods Max inside.

This case shouldn’t be worth discussing in depth, but putting them inside is the only way to trigger the headphones’ ultra-low power mode. If you take them off normally, the headphones will remain on and connected for several hours before entering this state.

This makes the AirPods Max case an essential accessory if you’re worried about battery life — especially when traveling — which makes their odd design even more strange.  Hopefully Apple issues a software update that gives us more control over the AirPods Max ultra-low power mode, or allows third-party companies to make cases. 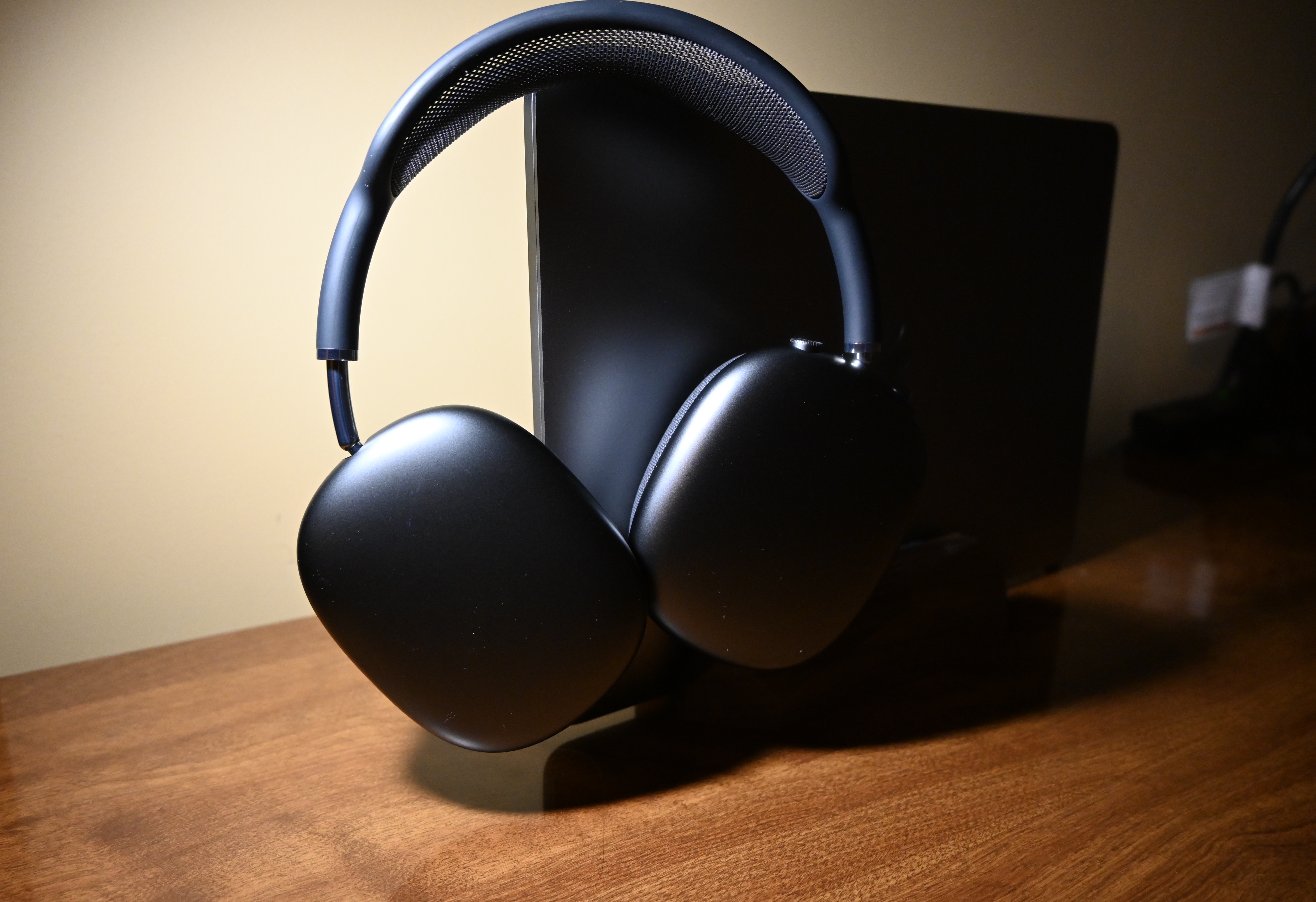 AirPods Max are a natural extension of Apple’s desire to enter the world of premium audio. Standard AirPods cost as little as $125, and AirPods Pro sound better, support active noise cancellation, and cost $199 at some stores.

Apple worked out the kinks with its earbuds, and brought the best features (and more) to AirPods Max. The ability to just pick up the headphones, have them instantly pair to my device, and start listening without hitting a single button made the experience of using them superior to other wireless headphones.

Switching between devices with a tap, and never having to double-check whether they made the new connection was similarly impressive. AirPods Max only work with Apple devices, but we have a bunch of great alternatives if you use Windows or Android.

They’re a big investment, and come with some design shortcomings that may be dealbreakers , but AirPods Max are smart, convenient to use, and exce excellent sounding pair of headphones designed with Apple’s devices in mind.