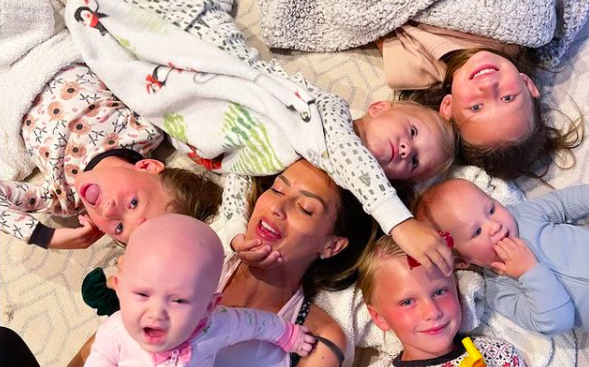 Hilaria Baldwin was extremely impressed at her son’s spelling as he wrote all over her car… unfortunately, the words he spelled correctly were NSFW.

The star, who shares six children with Alec Baldwin, was cracking up after six-year-old Rafael daubed the words ‘f***’ and ‘poop’ into dust on the family car.

Hilaria, 37, shared clips from Thanksgiving where her oldest son used his finger to write the expletive into the dust, scrawling: ‘F*** ya poop.’

The yoga teacher shared the result and told her Instagram story followers that it was ‘over the whole car’, joking: ‘He’s proud…I’m kinda proud of his spelling [and] reading. Silver lining?’

Hilaria later shared a photo of her cuddling Rafa, and captioned it: ‘Grateful that you an spell… now we can work on some nicer words.’

At least Rafa chose to express the choice words through dust this time, as he previously keyed his own name onto his father and mother’s car.

After the young boy ‘scratched the car in very, um, artistic ways, including writing his name and different emoji faces’, Hilaria explained that she tried to ‘stick with my calm and just explained to him why we don’t do that’, saying: ‘You know when you were a kid and sometimes you would do bad things because you weren’t paying attention and wrapped up in a game, then reality hit and you were like, “What have I done?” It was one of those.’

Alec and Hilaria are parents to Carmen, eight, Rafa, six, Leonardo, five, Romeo, three, Eduardo, one, and Lucia, who was welcomed via surrogate earlier this year, while Alec, 63, is also dad to Ireland, 26, from his marriage to Kim Basinger.

The Baldwins had a low-key Thanksgiving this year, with Hilaria reflecting on their ‘challenging year’ in an Instagram post.

She wrote: ‘I want to tell you all how grateful I am for you. This has been one 💥 of a challenging year. I know for many, many of us…but I will only speak from personal experience right now. Sometimes I didn’t think I was gonna make it through. I want you to know how much you have helped me through some pretty dark struggles. Knowing you were there—such comfort.

‘Yes, my children and my husband, my family and close friends have been invaluable…but YOU, I don’t get to express this face to face, due to the nature of social media and how far we all are…I SO want you to know and take in how grateful I am every day for you. I miss our chats and the safety net of our community. I’m hoping, one day, we will get back there. One thing struggle has taught me is to say “I love you more”. It’s what all of this is all about, in my opinion. So, I love you so…with my whole, grateful soul. Happy gratitude day.’

At the start of the year, Hilaria came under fire after she was accused of faking being Spanish, following a viral Twitter thread that pointed out inconsistencies in her accent and bio.

In October, tragedy hit the family when a prop gun discharged by Alec on the set of the Western movie Rust fatally shot cinematographer Halyna Hutchins.

Alec was ‘heartbroken’ by the incident, and has called for stricter gun safety laws on set.

An investigation into the incident is ongoing.

The 30 Rock actor has been laying low over the past few weeks, spending time with his family in The Hamptons.