Home » Celebrities » Bear Grylls: 'I'm not as strong as people might imagine'

Welcome to Metro.co.uk‘s The Big Questions, where we ask, well, the big questions (and the smaller ones too) and this week, we’re diving deep with Bear Grylls.

The adventurer and Running Wild With Bear Grylls host, 47, is a bona fide British icon, with an adoring fanbase that spans generations in no small part thanks to his meme-worthy tips for surviving in the wilderness.

But, as he’ll be the first to tell you, survival is a ‘state of mind’.

From TV shows, books and theme parks to his festival, Bear is bringing back his Gone Wild Festival for another year – a heady mix of music, good ol’ fashioned camouflage and concealment demonstrations( naturally) and *record rip* ‘gross eat’ stations?

Telling us about the inspiration behind the August bank holiday weekend event, which has now released day tickets, Bear enthused he wanted to create the ‘greatest outdoor adventure family festival ever run in the UK’.

He muses: ‘The setting is just incredible down there at Powderham Castle, right on the coast on the estuary, amazing ground, and such a great strong military community down in the southwest.

‘So to have a setting like that, and be able to bring 6,000 incredible people from all over the country down here…there’s a spirit to the sort of people that come. People who love adventure, the outdoors, are often quite family-minded, want to go somewhere that’s safe, but also that also has all the fun of festivals.’

Bear, Gone Wild is a real mash-up, survival course, music festival hybrid – what made you want to set it up? 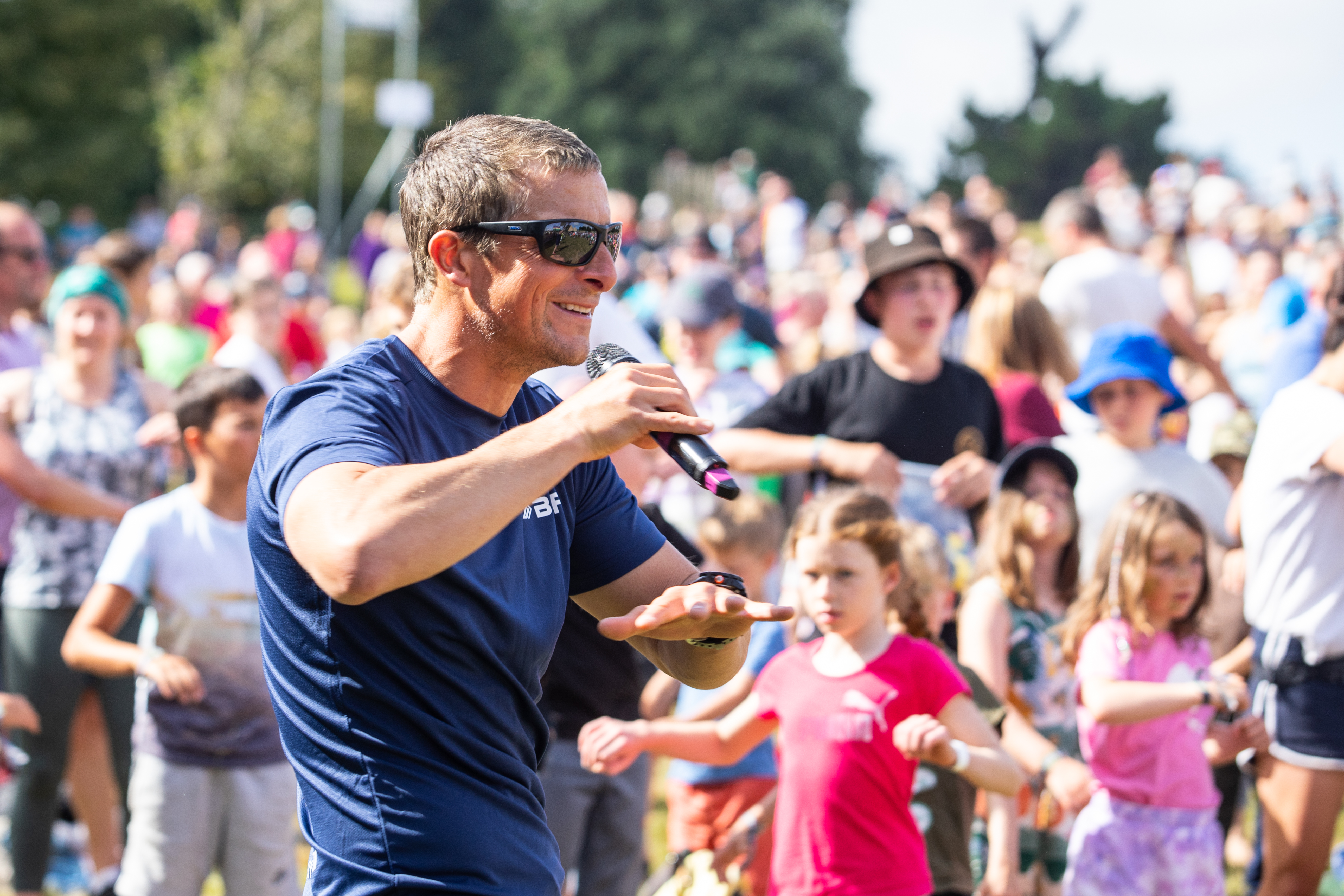 You look around, I remember last year seeing all these families, and the kids are throwing axes and doing wild swimming over here and paddle boarding and abseiling off the castle and quad biking.

But then you’ve also got amazing music, amazing food, and camping. So I don’t know, it’s a happy, really happy, special time. And I’m really proud of the team of ex-royal Marines that are running it, and the community there.

You’ve just signed The Script as a performer, alongside the likes of The Darkness and Sophie Ellis-Bexter. Are you hoping you might get the lads from The Darkness hanging out at the Gross Eat Station and taking in some of those questionable delights?

Well, you laugh, but last year we had so many times like that with the various bands.

Bands normally cruise around, stuck in their trailers, [Gone Wild] becomes a really fun adventure for them. I remember messing around with the Kaiser Chiefs backstage, talking of eating maggots with them.

It just adds a great spirit to that place, and it’s fun to see it expanding and growing this year and so much demand for people I think after such a tough two years.

You’ve navigated Everest, you’ve crossed the North Atlantic. I know your sons are a little bit older now [Bear shares Jesse, Marmaduke and Huckleberry with wife Shara] but how does adventuring compare to navigating a festival with three children?

[Laughs] It’s it’s a different dynamic, isn’t it? Well, they say adventure is a state of mind. So, to me, just getting to spend time with family at a place like this is special.

I’m away a lot of the year and actually to have a place like Gone Wild that is rooted in fun adventures, it’s also a safe space for families.

When it comes to your famous survival skills, when meeting people, what is the number one question that you seem to get asked about what they should learn?

This is the same dynamic we’re seeing with Gone Wild, it’s why so many people love doing all the activities, they actually want to be taught stuff, they want their kids to be taught how to survive, how to light a fire, how to make a camp, how to collect water, all of these kinds of skills, but really, it’s about a state of mind.

I see that also, on Running Wild, it’s my guests who come on the show, they want to be equipped with some of these skills.

One of the things I think, is that it’s a state of mind – it really is. Survival is all about having that never give up spirit and being resourceful and resilient in the big moments.

You’ve become a British icon through everything that you’ve done, but how do you approach fame or the idea of being in the spotlight?

I take it all with a bucket of salt, not just a pinch of salt.

I love hearing people’s stories, whether it’s just camping with their dad or their kids or their brother, who used to be a scout, or whatever it is, and that’s always a privilege to hear. We’re building an amazing adventure community around the world, through so many of these projects and I love that.

Are there opportunities that you’ve turned down in your career because they didn’t align with what you’re aiming to achieve?

Follow your heart, listen to that inner voice; don’t get distracted left and right. What we do has got to be empowering for other people, helping them live their life with an adventurous spirit, with a resilient spirit, with a never give up spirit.

All of the things are just mediums to share that – whether it’s a theme park, whether it’s Gone Wild, whether it’s books or programmes, we’re trying to do stuff that encourages people to get out there and go for it and take a few risks. And that’s important.

From Terry Crews to Barack Obama and Cara Delevingne, you’ve had amazing guests on Running Wild. Do you have a bit of a bucket list of people who you would absolutely love to have on? You probably can’t say any names…

Well, we’re really lucky on the show, we do get amazing guests. But we try and keep them quiet until we announce them and not jinx them.

I think people often say, ‘Well, how can we get these guests’. I do think these guys don’t need the fame or the money, they’re not there for that, there’s a zillion shows they can do if that’s what they’re after.

I think the wild gives us all something that money can’t buy, and that’s what we try and tap into across all these projects. That’s why people love Gone Wild, why people love our place [The Bear Grylls Adventure] at the NEC [in Birmingham] and, same thing, you’re tapping into that challenge and facing a few fears.

You’ve got to learn that in the wild, you’re gonna have a few scary times and you’ve got to keep going and try and keep a smile on your face even when it’s hard.

I read somewhere that when it comes to the sort of the first aid kits that you take on the treks with the celebrities, that antivenin is the one that gets brought out the most?

You’ve got to be prepared for the worst, always. And we’re going always to difficult places. Stuff does happen and you don’t want to be unprepared when you’ve been bitten by a venomous snake.

So we do have antivenin with us, but actually, we don’t have to take it out very often. We’ve had a few occasions where where we’ve had some nasty bites from snakes, but yeah, part of the occupational hazards.

Your popularity spans generations, but what do you think is a misconception about you?

I’ve been really lucky. From a young kid growing up, I was never the best or the sportiest or the strongest or the most clever. But I just love the adventure and I love doing those adventures with great friends and I think that’s all we’ve kept trying to do.

But I’m regularly surrounded by and meet other people who are far better climbers and survival guides or skydivers than I’ll ever be, but life isn’t about being the best, it’s about trying to do your best and being grateful for that journey.

And so I think I’m not as good as people would probably imagine – I think that’s probably the truth.