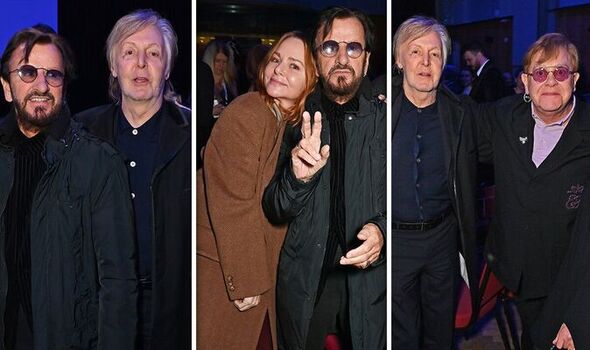 Paul McCartney and Ringo Starr were joined by a host of celebrities at the If These Walls Could Sing documentary premiere at Abbey Road Studios.

The Beatles’ Paul McCartney, 80, and Ringo Starr, 82, were joined by a host of stars on Monday evening at the premiere of Disney’s, If These Walls Could Sing, at Abbey Road studios.

Among A-listers were Elton John, 75, and his husband David Furnish, 60, as well as iconic model Twiggy, 73, (real name Lesley Lawson) and her actor husband Leigh, 77.

Paul and Ringo were supported by their wives Nancy Shevell, 63, and Bond girl Barbara Bach, 75.

If These Walls Could Sing is directed by Mary and will feature appearances from the likes of Paul McCartney, Elton John and Noel Gallagher.

The synopsis reads: “’In this personal film of memory and discovery, Mary McCartney guides us through nine decades to see and experience the creative magic that makes it the most famous and longest-running studio in the world.”

If These Walls Could Sing features appearances from the likes of Paul McCartney, Ringo Starr and Elton John as it documents the untold story of Abbey Road studio.

Paul McCartney wrapped his arm around his wife Nancy Shevell, who looked elegant in a black blazer and a satin blouse. Ringo Starr flashed a peace sign at the camera while his wife, Barbara Bach, added some colour with a bright red jumper under a black jacket.

Paul McCartney, 80, posed with his wife Nancy Shevell, 63, and daughter Mary McCartney, 53, at the premiere of the Disney documentary.

Fashion designer Stella McCartney looked chic in a brown coat as she posed with Ringo Starr at the Abbey Road event.

Paul McCartney’s photographer daughter Mary McCartney directed If These Walls Can Sing. The documentary’s synopsis says it “guides us through nine decades to see and experience the creative magic that makes Abbey Road the most famous and longest-running studio in the world”.

Twiggy, real name Lesley Lawson, wrapped up warm in a red coat and purple beret as she was pictured with her husband Leigh.

How Johnny Knoxville Came Up With His Stage Name