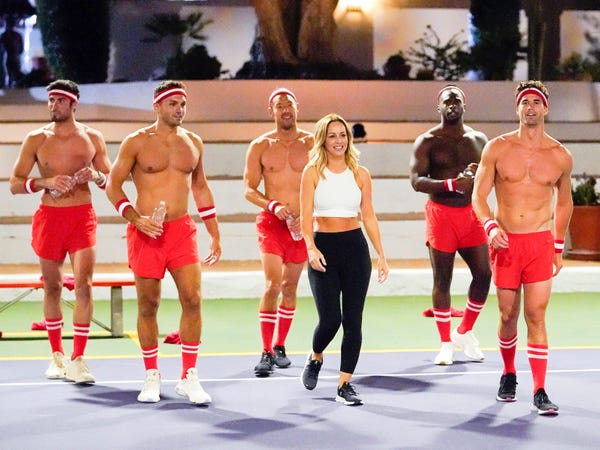 Amid an ongoing pandemic, "The Bachelorette" has had to get creative when it comes to dates. Long gone are the helicopter rides, performances from unknown country singers, and bungee jumping.

But the popular ABC show has still made headlines over the last week with a strip dodgeball date that incited debate on Twitter — and led to the making of a new "Bachelorette" villain.

It all began in the second episode of the season, when Clare Crawley revealed during a group date that her suitors would have to remove a piece of clothing every time they lost a round of dodgeball. At the end, the losing team appeared to walk back to their rooms completely naked.

"I knew it would raise talk. I don't mind that," he added. "I like that we kind of stir things up from time to time, whatever the topic is. And this is one of those where I didn't mind all the talk."

Still, many criticized the date for showing a double standard in how the franchise treats its contestants on "The Bachelorette" versus "The Bachelor," where the star of the series is a man dating a number of women.

"If this was a 'Bachelor' season, no way this happens, no way they get away with it, no way it's appropriate," former "Bachelor" star Ben Higgins said on his "Almost Famous" podcast. "I think the show is super smart. They knew this wouldn't shut down the show, but it's pushing the envelope a little bit here."

But Harrison was unfazed by the backlash.

"Some people, on both sides, are so adamant that they are right, and the truth is usually somewhere in the middle,4zß" he told Insider. "But no, I don't mind it at all."

But Harrison agreed with many viewers and 'Bachelor' alums that Yosef Aborady, a contestant on Crawley's season, had taken his criticism of the date too far

In this week's episode of "The Bachelorette," Aborady — who had not been on the strip dodgeball date — repeatedly said that it was "completely classless."

"Being a father, if I were on that date, hands down I would have said, 'No, I'm not going to do this, I'm not going to participate in that,"' he told one of the contestants. "The whole date, the whole activity was classless, distasteful."

Aborady, a 30-year-old medical device salesman from Alabama, went so far as to call the date an "atrocity."

"I came into this excited by the idea that Clare is the oldest bachelorette that there's ever been," he said, referring to the fact that Crawley is 39. "She's supposed to be more mature."

During the episode, Aborady pulled Crawley aside for a chat to tell her that he believed the date was "humiliating and degrading."

"That's why you were not on that date," Crawley told him.

"Well, I'm glad I wasn't," Aborady continued. "I expected a lot more from the oldest bachelorette that there's ever been. You're not setting the right example for my daughter. I'm ashamed to be associated with you."

After Crawley excused Aborady from the show, telling him she'd "never want my children to have a father like you," he continued to yell about her age as he walked away.

"You're not fit to be a mother to my child," he yelled. "You're completely classless Clare, classless! I expected way more from the oldest 'Bachelorette' in history. Remember, you're almost 40."

It was a scene that made many uncomfortable on Twitter, and multiple 'Bachelor' alums spoke out against Aborady's behavior

Harrison agreed that Aborady was "out of line" with the way he treated Crawley.

It's already been a very eventful few episodes for "The Bachelorette," and Harrison promised everything will come to a head in next week's show after it was teased Tayshia Adams will become the next "Bachelorette" amid rumors that Crawley left the season early for one of her suitors.

"Last night we kind of dropped a rather large hint of what is to come and that was just a nod to Bachelor Nation," Harrison said. "That was just our way of saying sit tight, but next week buckle up because it's all happening, and all your questions are going to be answered."

"You're going to really hear all the answers," he added. "And then you can kind of judge and debate amongst yourselves. That's what I really like. Instead of telling people how to think and what to think, I like you to watch and then you decide for yourself."

How Are Caleb & Dolores Connected On ‘Westworld’? It’s Not At All What Fans Expected