The brutality of the international drug trade was front and center this week at the trial of Joaquin “El Chapo” Guzmán, with one witness testifying in chillingly calm tones about dozens of gangland murders. The only catch? El Chapo wasn’t the murderer in question.

In a riveting back and forth with prosecutors on Tuesday, Juan Carlos Ramírez Abadía, a Colombian drug lord better known as “Chupeta,” calmly described how he meted out terrifying violence against anyone who opposed him, threatened him, flipped on him, or simply knew too much. The violence, which included the wholesale slaughter of rival crews in Colombia and murders in Brooklyn, where the trial is taking place, was necessary, Ramírez insisted.

“It’s impossible to be the leader of a cartel in Colombia without violence,” he said Tuesday afternoon. “If your drugs are stolen and you don’t do an act of violence against the people who stole from you, they’re going to keep stealing from you and then they’re going to kill you.” 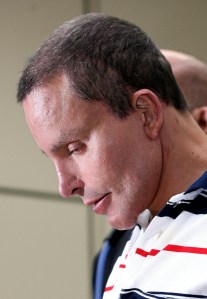 As the trial trudged into its second month, Chupeta arrived as the fourth major cooperating witness against Guzmán, and the first to fully detail El Chapo’s Colombian connection, which helped turn Guzmán and other members of the Sinaloa Cartel from successful marijuana smugglers into some of the most powerful cocaine traffickers on the planet.

Guzmán’s relationship with Chupeta, a former leader of Colombia’s infamous North Valley Cartel, formed one of the most crucial partnerships of El Chapo’s career, providing him with a virtually endless stream of cocaine, which he allegedly shipped to the United States for a 40-percent cut of each load. With Chupeta on the stand, the prosecution appeared to use his deep knowledge of the minutiae of El Chapo’s smuggling operation to further solidify their case against Guzmán.

Tuesday proved a dramatic end to a bizarre three days of testimony from Chupeta, who arrived in the courtroom last week wearing a black puffy jacket and gloves, his face grotesquely rearranged by a series of reconstructive surgeries he underwent in the early 2000s in an attempt to avoid capture.

Among the people at the government’s disposal, Chupeta, who is cooperating with authorities in hopes of having his eventual sentence reduced, is one of the witnesses most knowledgeable about the logistical workings of El Chapo’s alleged cocaine pipeline from Colombia, through Mexico, into the United States.

But Chupeta’s willingness to kill is a liability that the prosecution had to bring up themselves in order to lessen the impact of Guzmán’s defense team. So rather than try to shield jurors from the horrors of their witness’s past, the prosecution swiftly acknowledged his body count during his first day of testimony, and then moved on. 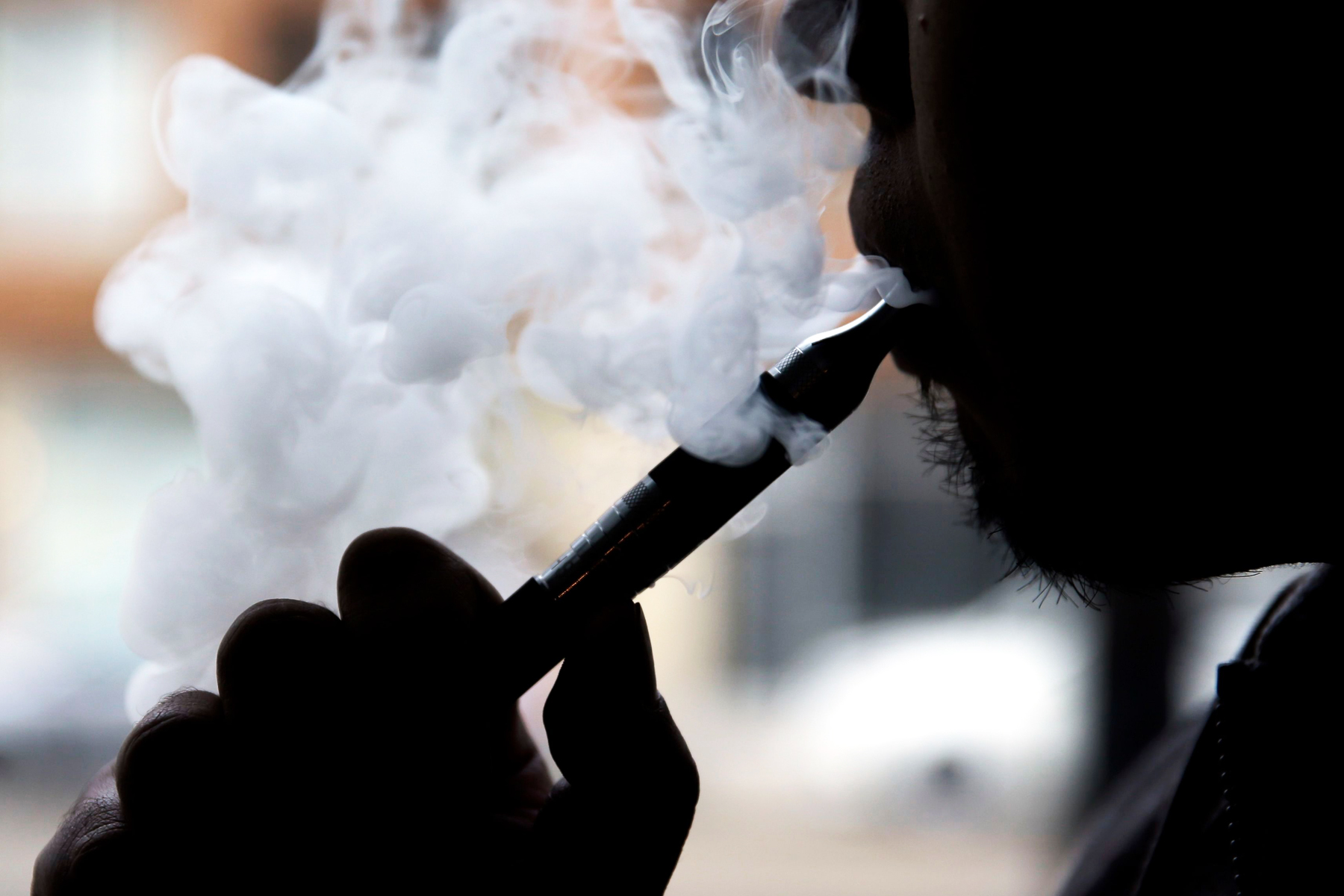 When the El Chapo’s defense team began their cross examination on Tuesday, Chupeta had already copped to ordering at least 150 murders throughout his tenure in the drug game. Armed with that, and the other acts of violence that Chupeta has admitted to, Tuesday may have been the defense team’s most successful day yet, as El Chapo attorney William Purpura effortlessly used Chupeta’s admitted penchant for extreme violence, and his willingness to go to great lengths to avoid prison, to undermine his reliability as a witness.

The murder victims included an attorney who ran his mouth when he drank; a retired Colombian Army lieutenant who stole weapons from the cartel; a man named Rodriguez, who Chupeta personally shot in the face for unspecified reasons; two women investigating the cartel for the Colombian prosecutors office, in part because one of the women had a brother who had been murdered by the cartel.

“You ordered the killing of both women and they were executed on a highway outside of Cali, [Colombia],” Purpura said.

The list went on. One man, named Canoso, was caught stealing $2 million from the cartel. As revenge, Chupeta ordered his men to make Canoso feel comfortable, so he wouldn’t see it coming, and then shoot him in the back of the head.

In perhaps the most gruesome act of violence, Chupeta described how his men lured a rival member of his own cartel to a farm and slaughtered him and his entire 12-man security detail, before going down the road and gunning down the narco’s back-up detail, who were waiting at a gas station.

“Waiting for him [at the farm] were approximately 40 sicarios who obliterated him with guns,” Purpura said. “The bodies were then thrown in a pickup truck and were disposed of.”

Some of the murders ordered by Chupeta were closer to home, including the murder of a man named Vladimir Biegelman, who was shot to death in Mill Basin, Brooklyn, on December 2nd, 1993. In 1994, Luscieni Correa Quintana, along with her husband Carlos Quintana, and her son John Gonzalez, were gunned down in a stash house that Correa Quintana operated in Fort Lee, New Jersey because the cartel believed she was stealing, Purpura said.

In several testy exchanges, marked by repeated objections from the prosecution — most of which were sustained — Purpura aggressively grilled Ramírez about why the jury should believe he wasn’t lying on the stand, when he had been so willing to lie, cheat and kill to save himself in the past.

Purpura went down the list: murdered associates, fake documents from nearly every country in South America and, most viscerally, the reconstructive surgeries that left Ramírez looking like a cartoon villain.

“Would you lie to avoid apprehension?” Purpura asked.

“At that time of course I lied,” Chupeta said. “I changed my appearance.”

“Would you lie now?” Purpura asked

While Tuesday’s testimony was packed with gory details, much of Chupeta’s testimony on Monday focused on a series of ledgers detailing the inner workings of his organization. The ledgers, which detailed a series of shipments labelled “Juanita 1-10,” and gave the court a step-by-step view into how the Colombians got cocaine to the Mexicans, who in turn ferried it north to the United States. 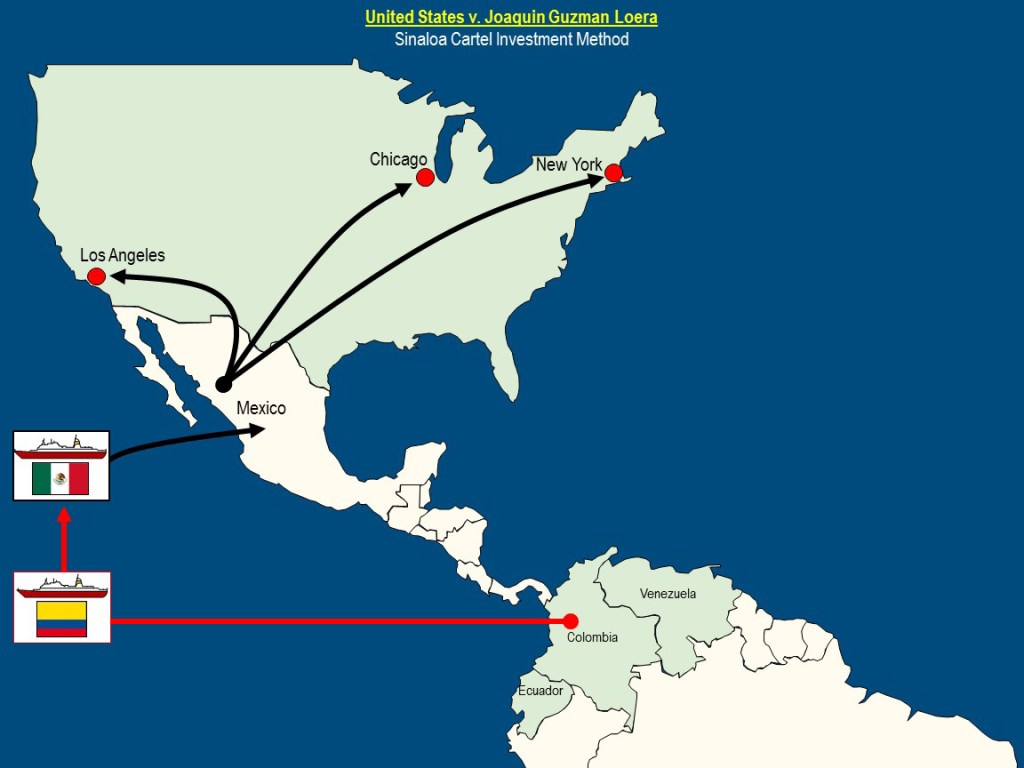 A map showing approximately how the boats would hand off cocaine in international waters, and then how it would go north. Photo: US Department of Justice/Brooklyn Federal Court

When Ramírez first began working with El Chapo and his allies in the Sinaloa cartel, much of the smuggling was done via planes, with so many jets bringing drugs north and cash south that one American official referred to it as an “invasion, Ramírez said.”

Authorities grew wise to their movements, and began monitoring Chupeta’s planes along every smuggling route using crafts equipped with radar, which forced Chupeta to improvise. Abandoning the skies, he began sending fishing trawlers loaded with thousands of kilos of cocaine far into international waters, where they met up with boats hired by the Sinaloa Cartel to hand off the goods.

Ramírez had an eye for detail, and this extended to his documentation of the North Valley Cartel’s smuggling operation, which were fastidiously annotated in coded spreadsheets, with each one listing the amount of kilos per shipment, the cost of gasoline and other expenses.

Despite his dispassionate discussion of his role in the deaths of more than 100 people, Ramírez did have moments where emotion seemed to get the better of him, namely when it came to his own vanity or the subject of him losing any of his precious cocaine.

On Monday, as prosecutor Andrea Goldberg was painstakingly dissecting Chupeta’s ledgers, the subject turned to two shipments, labelled “Juanita 8” and “Juanita 9,” which had fallen into the hands of the authorities on the high seas in September of 2004. 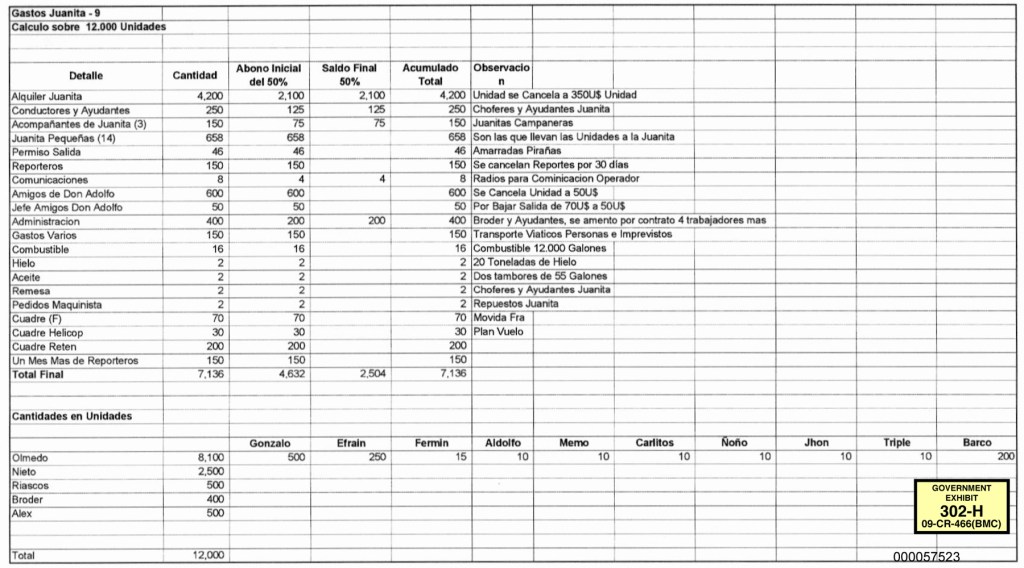 A spreadsheet of accounting for Juanita 9, used as evidence. Photo: US Department of Justice/Brooklyn Federal Court

Chupeta’s testimony Tuesday was followed by German Rosero, a former public defender in Colombia who began working for the North Valley Cartel in order to get protection from someone threatening his life. Rosero, who was a childhood friend of Chupeta’s right-hand man Sergio Ramírez, worked his way up to being the North Valley Cartel’s man in Mexico, and told jurors about his dealings with the Sinaloa Cartel. Rosero continued testifying on Wednesday.

L.A. County Cancels Halloween Trick Or Treating Due to COVID