The film does not appear to be connected to the original franchise that starred Macaulay Culkin, Joe Pesci, Daniel Stern and Catherine O’Hara. Instead, it follows a new youngster in an equally busy household, 10-year-old Max Mercer, played by Archie Yates (“JoJo Rabbit”).

When his family is forced to separate onto two flights for their holiday trip to Tokyo, Max gets left behind in the shuffle. In the trailer, he’s delighted to get the whole house to himself for a change, eating junk food and doing wildly dangerous stunts on his trampoline.

However, when two married robbers decide to break into his house for the holidays, he takes on the responsibility of defending his home.

Like Culkin’s Kevin McCallister did in the original, Max establishes a “battle plan” and sets up a series of booby traps in his house and uses some clever weapons to thwart the would-be criminals, played by Ellie Kemper and Rob Delaney.

The Hollywood Reporter notes that the reboot to John Hughes and Chris Columbus’ classic 1990s comedy was penned by “Saturday Night Live” writers Mikey Day and Streeter Seidell. It was directed by Dan Mazer and will drop on the Disney+ streaming platform on Nov. 12, just in time for the holidays. 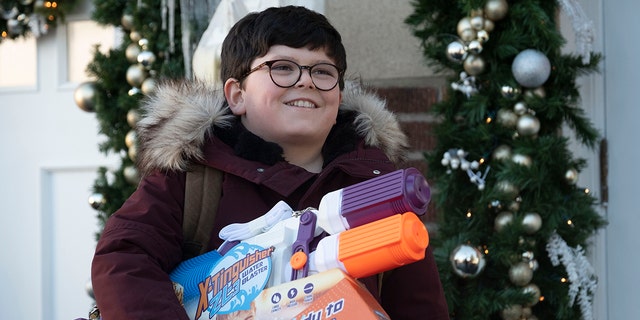 Unfortunately, Newsweek reports that the trailer is getting some negative attention on social media as fans of the original denounce the remake as “unnecessary.” Many note that the Oscar-nominated original only came out in 1990 with a sequel that hit in 1992 (roughly 30 years ago). Many have said that the movie is not dated enough to require a reboot.

Halsey Calls Out Victoria’s Secret After Performing at Fashion Show

Paddy McGuinness: Top Gear host gets back behind the wheel a day after ‘lethal’ crash