All eyes are on the U.S. women’s gymnastics team after Simone Biles, referred to as the greatest of all time to many, removed herself from the competition after one rotation during the team all-around finals. Her removal wasn’t due to a physical injury; it was her mental health that took priority. “I say put mental health first before your sport,” Biles told reporters after withdrawing (via ESPN). “I had to do what’s right for me and not jeopardize my health and well-being.” Her teammates and first-time Olympians Jordan Chiles, Grace McCallum, and Sunisa Lee stepped up and brought home a silver medal for the U.S.

Biles also dropped out of the individual all-around competition, again citing reasons related to mental health. Fellow U.S. Gymnastics team member Jade Carey stepped up to replace her with just 24 hours’ notice. With the four-time Gold medalist out of the competition, all eyes were on 18-year-old Suni Lee, as she was expected to be the winner of the event. So how did Lee hold up under the pressure? Let’s just say she stuck the landing. Read on for more. 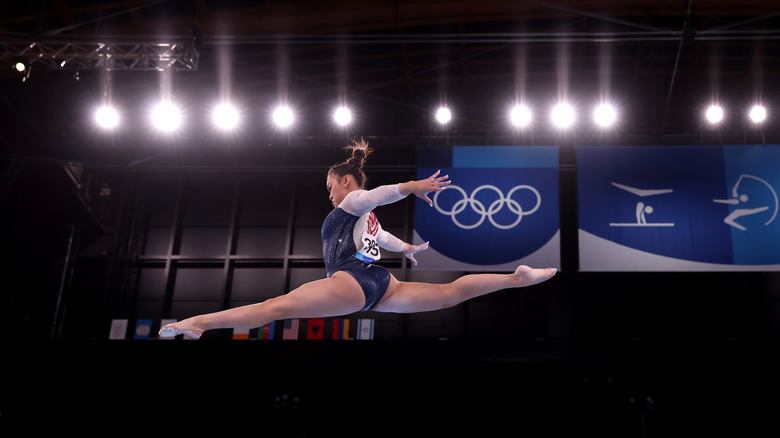 Sunisa Lee ignited viewer expectations and reminded the world why the U.S. women’s gymnastics team is still a force — taking home a gold medal in the individual all-around competition after the reigning champion of the event Simone Biles dropped out of the competition. Lee beat out Brazilian Rebeca Andrade just slightly—Andrade scored 57.298, while Lee scored 57.433—to become the sixth American gymnast to win the event, per ESPN.

While Lee ended up winning, it was a close race from beginning to end. Andrade held the lead in the standings after the first two rotations, but not by much. At the end of the second rotation, there was only a .66 point difference between the Brazilian and American gymnasts. Lee took the lead following her third rotation; the beam event. She held onto the lead and ended up taking the gold. However, Andrade was the first Brazilian to win a silver medal in women’s gymnastics history, per ESPN.

Lee’s family watched from her hometown of St. Paul, Minn., holding a watch party filled with family and friends eventually cheering, screaming, and crying of joy. The Tokyo Olympics Twitter account put together a montage of their reactions at the watch party, which are bound to bring a smile to anyone watching. We can’t wait to see what Lee does in the future! You GO, girl!

David Eason: Jenelle’s Goons Attacked Me With a Coat Rack!