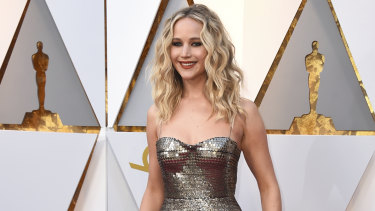 Jennifer Lawrence arrives at the 2018 Oscars at the Dolby Theatre in Los Angeles.Credit:AP

The couple has so far managed to keep their private life just that, and despite having been snapped together many times are yet to comment publicly about their relationship.

In 2015, Lawrence told Teen Vogue she was looking forward to one day tying the knot.

"I can't wait to be married," she said. "I feel like if I find that one person who I want to spend the rest of my life with, who I want to be the father of my children, that I would absolutely not f— it up.

"But I'm also not banking on that."

Before Maroney, Lawrence was involved with Darren Aronofsky, who directed her in 2017's Mother! Prior to that she dated her X-Men: First Class co-star Nicholas Hoult, from 2010 to 2014.