Word in the hallowed and possibly haunted halls of Buckingham Palace is Prince Harry and Prince William’s relationship is more tense than ever following the Queen’s Jubilee, but apparently Kate Middleton is determine to reunite them.

A royal insider told Us Weekly that “There’s a small glimpse of hope of saving the brothers from never speaking again: Kate, She can sense that despite everything that has happened, William still feels the loss of Harry.”

Apparently, Kate is “frantically trying to play peacemaker” between the brothers, which has thus far been an, erm, unsuccessful mission. “[She] had a quiet word with the boys separately, even going as far as calling Harry in Montecito and suggesting that he reach out to William on his birthday,” the source said. “The issue is William and Harry are both overly stubborn, so there’s not much hope.” 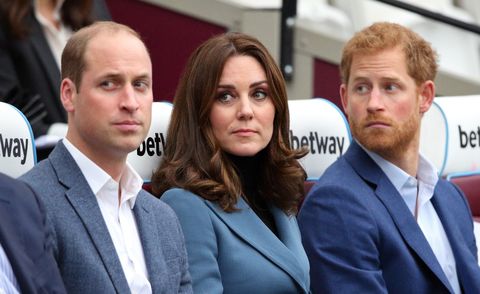 The brothers didn’t get a chance to spend time together during the Jubilee (Wills and Kate skipped Lilibet’s first birthday party due to an event in Wales), and it’s unclear when the Sussexes will be in England again. Meanwhile, another Us Weekly source somewhat dramatically told the outlet that William and Harry’s relationship is “doomed” and “irreparable,” and that William “doesn’t know who [Harry] is anymore.”

However!!! That source also noted that the Duke of Cambridge “Still loves his little brother. He’s his own flesh and blood and that underlying affection will never go away. William’s not one to bear grudges but what’s right is right. He’ll be civil to a point, but he’s not going to play happy families with them again or pretend that everything’s A-OK when it’s anything but.”

Damn, here I was thinking my family is dramatic.