Much has been said about Kate Middleton and Prince William’s 2011 royal wedding. Their nuptials were the most anticipated at the time—it was the first big wedding following Princess Diana and Prince Charles’ in 1981—and the only thing that topped it was when Meghan Markle and Prince Harry tied the knot in 2018. From a viewer’s standpoint, Kate and William’s wedding appeared to go according to plan, but apparently there was some major drama before the ceremony.

In a new documentary called Secrets of the Royal Dressmakers, royal correspondent Katie Nicholl said there were some tears when the designer of Kate’s dress was revealed. You see, one of the most exciting parts about royal weddings is finally seeing which designer crafted the custom gown and noticing all the little tributes hidden in the seams. (Kate’s gown had roses, daffodils, thistles, and shamrocks weaved into the sleeves to symbolize England, Wales, Scotland, and Northern Ireland.) 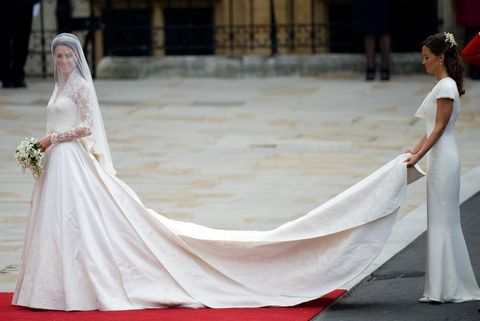 Unfortunately for Kate, despite her best efforts at keeping her designer a secret, the Sunday Times spoiled that she picked Sarah Burton of Alexander McQueen because the fashion house is known “for the beauty of its craftsmanship and its respect for traditional workmanship and the technical construction of clothing.”

The English newspaper broke the news nearly two whole months before the wedding, and that definitely caused a stir among Kate and her team. “Behind the scenes I think that caused tears at the Palace because Kate had done everything she could to keep the wedding dress a secret,” Katie said.

But the good thing is that nobody knew what the gown would actually look like, so the reveal wasn’t totally ruined. I’m inclined to say she lived happily ever after, but that family is filled with so much drama right now, so…

Pete Davidson Calls Out Ariana Grande For Spray-Painting Herself Brown: ‘My Career Would Be Over Tomorro