What do you do with all that money when you’re divorced from a man worth £770 million?

Valeria, the ex-wife and right-hand woman of multi-millionaire Brexit donor Paul Sykes, sank some £70 million into restoring a Grade II-listed manor house in Ripon, North Yorkshire, and opened it as a five-star hotel with the help of her new boyfriend, Colin Little, a former canon of Ripon Cathedral.

Sadly, her dream has had no happy ending, as I can reveal that she has now split up with Little.

‘It’s a terrible shame, but it’s all over,’ one of her friends tells me. ‘Colin was a very supportive partner while she was doing up the hotel.

‘They shared a huge passion for the project — and each other — but some things just aren’t meant to last.’ 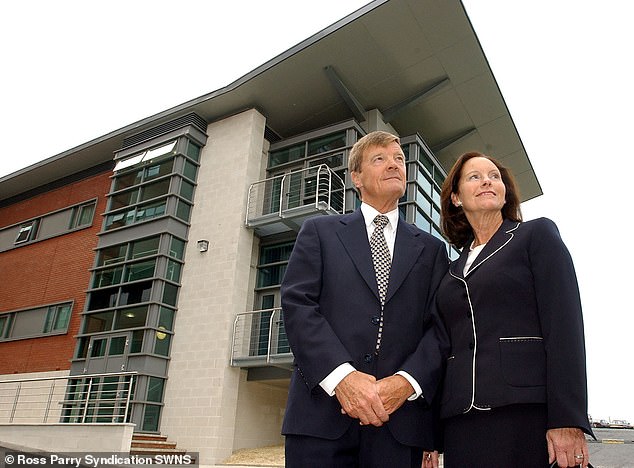 The coal miner’s daughter, 78, met Little through her then-husband after he paid £500,000 for new doors at Ripon Cathedral.

She split up with Sykes, one of Britain’s richest self-made men, in 2012 after 44 years of marriage.

Little then played a large role in the three-year refurbishment of the town’s historic Grantley Hall. Surrounded by 30 acres of wooded parkland, it was once the family home of Fletcher Norton, Speaker of the House of Commons and the 1st Baron Grantley.

It played host to Queen Mary in 1937 when she stayed there with her daughter, Princess Mary, and son-in-law, Lord Harewood. 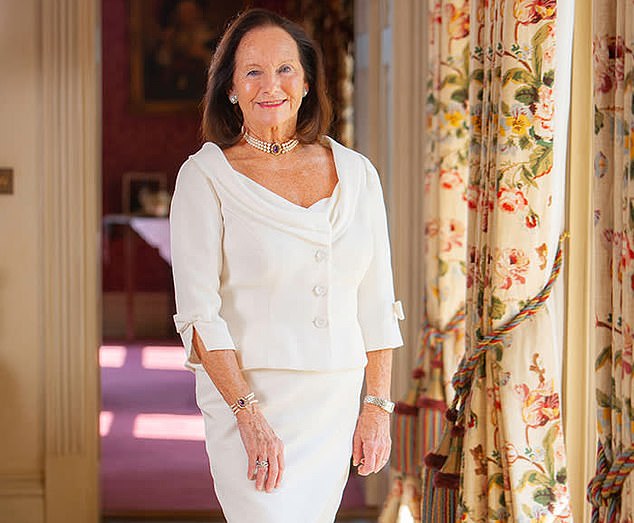 The coal miner’s daughter, 78, met Little through her then-husband after he paid £500,000 for new doors at Ripon Cathedral

Ambitious ‘Yorkshire lass’ Valeria bought it in 2016 for an undisclosed sum — it had been on the market for £5.95 million — and turned it into a luxurious 52-bedroom hotel with four restaurants and a spa with a 60ft pool, snow and steam rooms, an altitude training room, underwater treadmill and cryotherapy chamber.

‘I feel sad when I see beautiful old buildings like that. I just want to save them,’ she said.

‘I love restoring properties and, after taking advice, I knew I could do it. I had this vision of it as a first-class hotel and I turned to Colin and said: ‘I’m going to buy it.’ ‘

Now, the honeymoon suite will be available . . .

Chelsea Flower Show organisers are blooming worried about this year’s event. Moved from May to September because of the pandemic, the show could be without its most illustrious regular visitor, the Queen.

‘The Palace has still not confirmed to us if she is coming,’ says my man with the watering can. The Queen is patron of the Royal Horticultural Society and has attended most years since her coronation in 1953.

But she does not usually return from her holiday at Balmoral until the end of September. 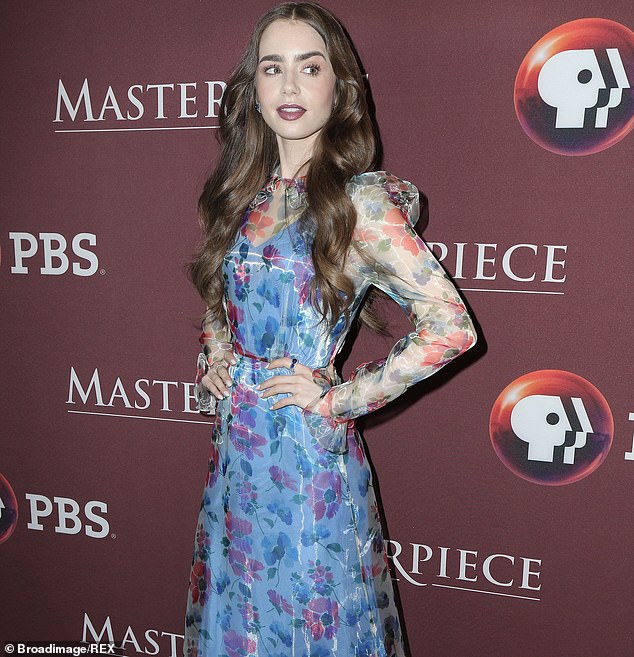 The daughter of pop star Phil Collins plays the victim of a holiday robbery in Windfall, a Hitchcock-style thriller

Working with your other half often spells doom for a relationship in Hollywood, but Emily In Paris star Lily Collins is undeterred. I hear she’s secretly shot a forthcoming Netflix film directed by her fiance, Charlie McDowell.

The daughter of pop star Phil Collins plays the victim of a holiday robbery in Windfall, a Hitchcock-style thriller.

Lily, 32 gushes: ‘This brilliant script provided me with the opportunity to take ownership over a completely different character than I’ve ever played before.’

Think Marco Pierre White is a mere chef? He has higher aspirations. ‘To live the life of a true artist, you’ve got to struggle,’ he tells the podcast It Runs In The Family.

‘Look at Van Gogh. I teach my children to struggle. You make money, invest it, spend it. Make yourself poor again. You must make yourself poor. When you make great wealth, you become complacent.’ 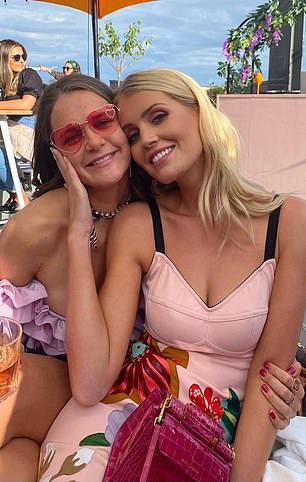 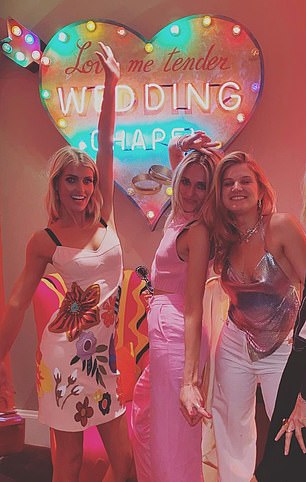 Aristocratic brides might once have expected a night at home before their wedding with friends and a glass or two of champagne, but these days blue-blooded hen parties are more raucous affairs.

The Earl of Pembroke’s sister, Lady Jemima Herbert, held a hen do inspired by the film Legally Blonde in which Reese Witherspoon played a ‘bimbo’ who defied expectations by getting into Harvard Law School.

The guests, including Princess Diana’s niece Lady Kitty Spencer and fashion designer Helena Asquith, were driven by stretch limo to Ham Yard Hotel in Soho, where they posed in the Dive Bar, which has a Las Vegas-style neon wedding chapel sign.

‘I’m fully embracing the theme — pink make-up and everything,’ trills Lady Kitty, 30. ‘I was born ready and very eager for this.’

You’ve heard of the ‘Kate effect’, where anything worn by the Duchess of Cambridge sells out within days . . . now it’s the ‘Carrie effect’.

I’m told you’ll have a long wait to hire the dresses worn by Boris Johnson’s wife at the G7 summit. Carrie rented them from the Hurr website created by Victoria Prew, who tells me they are booked ‘months and months in advance’. 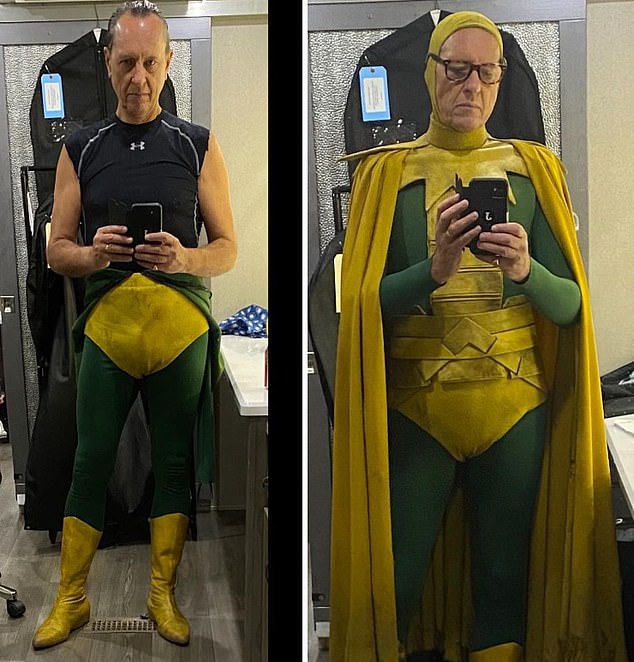 Richard E. Grant was thrilled to be cast as a superhero in the much-hyped new series, Loki, particularly as his character, Classic Loki, had a rippling physique in the Marvel comic books

Weedy Richard E. Grant was thrilled to be cast as a superhero in the much-hyped new series, Loki, particularly as his character, Classic Loki, had a rippling physique in the Marvel comic books.

So he was crestfallen to arrive on the U.S. set and find the producers had got rid of the muscles.

‘As you can see, I’m born without any,’ Grant moans. ‘When I got to Atlanta, I said: ‘Where’s the muscle suit I get into before the green tights?’ They said: ‘What muscle suit?’ I said: ‘Like the drawings.’

‘I don’t get ill because I’m vegetarian,’ says Lumley, 75. ‘I still have plenty of energy — I am absolutely fine, I gave up meat 45 years ago.

‘Everything I was in, including being Patsy, was done on a vegetarian diet.’ Pass the lentils!

Tallulah Willis Is Engaged to Dillon Buss: See Her Ring

Here’s How To Learn Korean With BTS’ Help, Since You’ve Got Extra Time

Halsey, Kelsea Ballerini Team Up On ‘Graveyard’ On ‘CMT Crossroads’