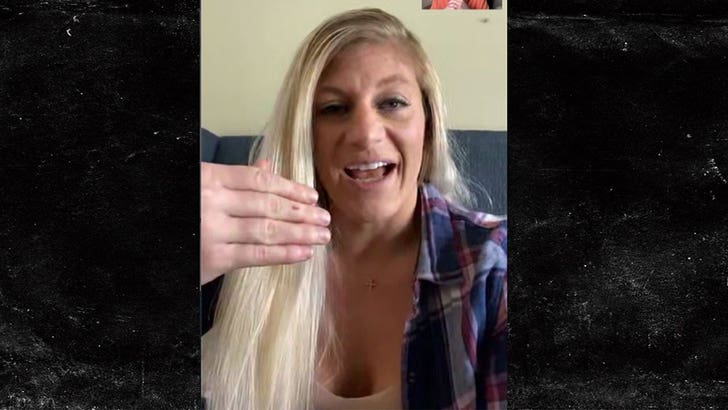 MMA star Kayla Harrison didn’t just beat her opponent to a bloody pulp this weekend — she got blood splatter everywhere … even in her own mouth!

Harrison absolutely DOMINATED Courtney King at Invicta FC 43 on Friday night — with the ref ultimately stopping the fight in the 2nd round.

But, good God, THE BLOODY CARNAGE!!

Harrison busted up King’s face so bad, she looked like Darth Maul at the end of the fight.

So, what was going through Kayla’s mind as she was soaked in her opponent’s blood?

“I was surprised by how much blood there was and that the doctor didn’t stop it because I was literally slipping in blood,” Harrison tells TMZ Sports … “It was like a slip n’ slide in there. It was disgusting!”

And, here’s where things really get gross …

Harrison said she has a habit of licking her lips — even during the fight — and admits, “I licked my lips and I was like ‘Oh God, I just tasted blood!'”

We asked Kayla if she ever felt bad for Courtney during the fight — and yeah, turns out she’s a human being!

“Yeah, of course! There’s two Kaylas. There’s the Kayla that’s like ‘This is barbaric! Oh my god, I don’t wanna punch her anymore’ like, ‘I don’t wanna do this’ … and there’s the part that’s like, ‘No this is my job. This is what I was meant to do — hit her harder!'”

“It’s an interesting dichotomy when you’re in the cage. The killer instinct has to come out. But, that was definitely next level for me.”