Home » Celebrities » Nikki Bella Reveals Plans For Baby No. 2 After Going ‘Back & Forth’ Amidst Potential WWE Return

Nikki Bella is revealing if she wants to have a second child or return to the WWE to pursue a tag team championship with twin sister Brie.

Nikki Bella didn’t consider becoming a mother of two before precious son Matteo was born on July 31, 2020. The 37-year-old was planning on having her baby with fiance Artem Chigvintsev, 38, then attempting a WWE comeback with twin sister Brie. But now Nikki wants to give her little boy a sibling, especially one close in age to the now seven-month-old. She revealed her plans for a second baby and how it is conflicting with her WWE hopes during the Mar. 10 episode of The Bellas Podcast.

“I’ve been having some conflict in my head lately. And I know I talk to you about this a lot, I go back and forth…but baby number two. So I thought I was one and done and then Matteo makes me want to give him a sibling and Artem makes me want to give him a baby girl, not that I have any control over that,” Nikki revealed about possibly expanding her family with the Dancing With the Stars pro partner and reigning Mirrorball champ. 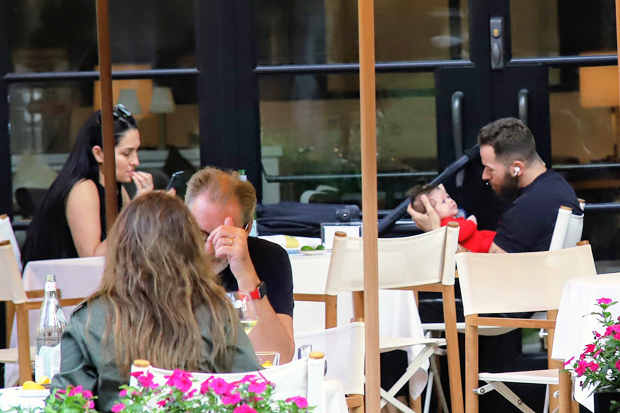 Brie told her sister not to let age be the deciding factor when it comes to giving Matteo a sibling, sharing, “I mean, people are having babies at 45.” However Nikki doesn’t want to be one of those women. “I know, but I don’t know if I want to be pregnant at 40. This is where I’m having a really tough time,” she explained.

Brie observed, “I definitely see that you want to do a WWE run before pregnancy. But if we even talk about if baby number two is possible for you, I think everyone wants to know if this WWE run is going to happen.” The sisters announced during a Jan. 29, 2021 appearance on Ellen that they hope to make a WWE comeback at either Wrestlemania 2022 or 2023 to compete for the tag team title. 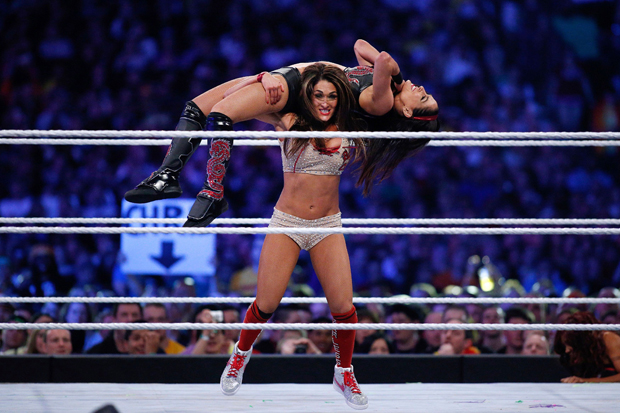 Nikki retired from the WWE in March 2019 after a series of neck injuries. She told fans on the podcast that she’s “not cleared to wrestle” at the moment, but she’s working on her return. “I saw a doctor last week who is starting to help me with neck-strengthening exercises,” Nikki explained. “He’s starting to help me gain that strength…We’re gonna see what a year does and how that bone grows and how strong my neck can get.”

Nikki and Brie had wanted a shot at the WWE Women’s Tag Team Championships in 2019 when Nikki’s injuries caused their dream to be dashed. In a joint June 2019 appearance on The Tonight Show with Jimmy Fallon, Nikki explained, “I herniated the disk above where I had surgery, I have all this inflammation around the metal, and then I have a cyst on my brain. So, they were like, ‘You’re done, no more, you’re out.’ So, I didn’t get a choice, which sucks,” about being forced into retirement.

Nikki had previously undergone neck surgery in 2016, which put her out of action for 10 months, and had only wrestled sporadically in 2017 and 2018. For Nikki to get another shot in the ring after all she’s been through physically would be huge. But so would adding another child to her family with Artem. She’s definitely got some tough decisions to make.

Why Kate Middleton and Prince William Broke Up Before Getting Married