Anyone who’s watched Grey’s Anatomy for even a millisecond has been enamored with Derek “McDreamy” Shepherd and concluded if you couldn’t have him, it was fine if Meredith Grey did. Of course, like most fans, the hope of these characters’ fictional romance blossoming into something IRL always lingered. But it was a hard no, since Patrick Dempsey has been married for more than 20 years, aka pretty much the same amount of time the show has been on. (And Ellen Pompeo’s been married for 15!) Because we love knowing everything about celebs and their love lives, we dusted off our finest 🔎🔎🔎 to learn all about Patrick’s wife Jillian Dempsey. Without further ado! 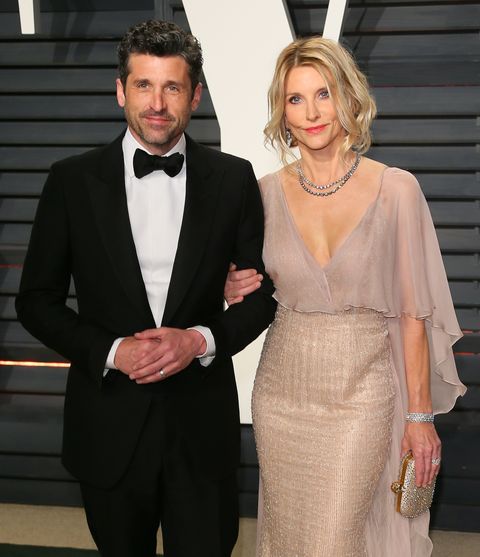 She’s a BFD in the celeb hair and makeup world

Jillian is a celebrity hair stylist and makeup artist, having painted the faces of everyone from Emma Roberts to Kristen Stewart, and tussled the tresses of Julia Roberts and Bradley Cooper. Jillian’s luxury makeup line is known for its lip and cheek tints, gold eye masks, concealer sticks, and a bunch more.

Patrick also had a few Very Important thoughts on his wife’s line of work: “My big thing is to make sure the lipsticks taste good when you kiss. And, well, so far they taste pretty darn good.”

Jillian and Patrick met when she was his hairstylist

“I was shocked [when he came in for an appointment] but at the same time, I was happy because he was so cute,” Jillian told People back in 2002, noting that when she saw his name in her appointment book, she thought it was a joke from an employee. They were each in relationships at the time, so after about three years of haircuts and their respective breakups, they finally started dating.

Jillian and Patrick have three kids together

In 2002, Jillian and Patrick welcomed their now-19-year-old daughter, Talula. Five years later came their set of 15-year-old twin sons, Sullivan and Darby. Of course, when your mom is a makeup artist, there are bound to be moments when you have to be the guinea pig:

She and Patrick have been married since 1999

Jillian filed for divorce in 2015, but she and Patrick patched things up and they called the split off in 2016. Patrick told People the thought of their marriage ending was “scary,” but ultimately, they both wanted the relationship….and the hard work that went into repairing it. “Our marriage was not something I was prepared to let go of,” Patrick said to the outlet in 2016. “I didn’t feel like we had done all the work. And we both wanted to do that work. That’s where it started. It’s always destabilizing when you’re potentially breaking up a family or you have a big section of your life that’s ending.”

For their 19th wedding anniversary, the couple went back to the spot where they officially became husband and wife:

For their 23rd wedding anniversary (their most recent), Jillian and Patrick posted the same throwback photo from their first trip to Maine. Jillian wrote in the caption, “Happy Anniversary Paddy, my hubby of 23 wonderful years with 3 beautiful children together! *We are posting at the same time • same pic. This was one of our 1st picnic dates in Maine and our hair was fantastic! I love you ♥️ @patrickdempsey.”

You truly love to see a lasting romance!