Kim Kardashian & Pete Davidson were spotted laughing and getting cozy in Santa Monica on Sunday, with Pete displaying a very curious mark on his neck.

Now that Kim Kardashian, 41, and Pete Davidson, 28, have confirmed their romance, they’re also putting the PDA on display. While dining at a fancy Italian restaurant in Santa Monica, California on Sunday night, Pete displayed what looked like a hickey on his neck, in photos you can see here. The two were spotted having an overall great time as they left the restaurant holding hands, laughing while getting into Pete’s Lamborghini SUV, the Daily Mail reported.

The two were reportedly escorted by a body guard and dined in a private room in the restaurant, packing on the PDA as they left the locale. Kim looked monochromatic chic, with a long leather skirt over thigh-high leather boots, a long-sleeved bodysuit, elbow-length leather gloves, and a matching black baseball cap. The Keeping Up With the Kardashians alum also carried a small silver bag and wore her signature raven locks down and long. Pete, for his part, wore a dark grey and white jacket over a green t-shirt, pairing the look with relaxed-fit jeans, white sneakers, and an “Uncle Paulies” baseball cap. As SNL funnyman Pete’s alleged love bite was on display, the pair were seen laughing in the car as they drove off. 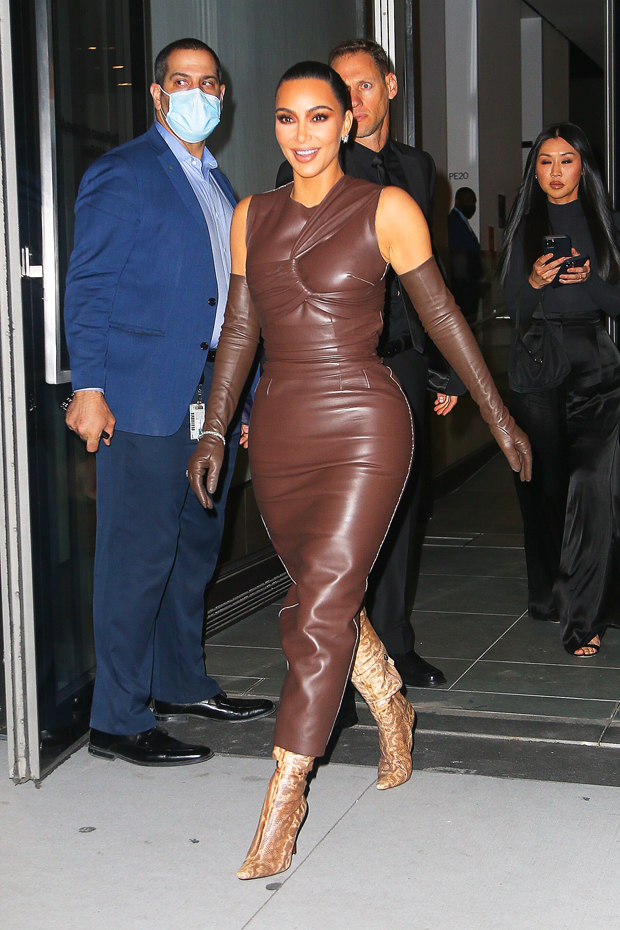 Sunday night wasn’t the first time the lovebirds were seen flaunting some serious PDA. This week in Palm Springs, California, the couple celebrated Pete’s 28th birthday at Kris Jenner‘s desert home. As speculation began to grow about their purported romance, a source dished to HollywoodLife EXCLUSIVELY what the true status of their relationship is. “They are not super serious like, ‘you are my girlfriend’ and ‘you are my boyfriend,’ but because they have really strong feelings for each other, they are not looking to date anyone else right now,” the source revealed.

According to the insider, “Palm Springs was exactly what they needed to know how much they are really into each other. Neither of them want to be with anyone else right now, but that does not mean that they are completely exclusive and locked into a monogamous relationship,” the source said, adding, “They know that they like each other and that they click on a physical and emotional level.” After photos surfaced the following day of Pete and Kim holding hands in a Palm Springs parking lot, HL learned the pair was not at that locale for very long.

The Truth About Rebel Wilson Being Kidnapped At Gunpoint

Why did Prince William & Kate change their social media display-name?