Peter Andre gave a glimpse of his two youngest children to followers on Wednesday 5 January as he posted a photo capturing them during their family holiday in Dubai earlier this week.

The 48 year old typically keeps hidden the faces of his daughter Amelia, seven, and son Theodore, five, shared with wife Emily Andrea, following her wishes to keep the identities of their children private.

This comes in contrast to the ease in which Peter posts images of his two older children, Junior, 16, and Princess, 14, who regularly feature on his social media and have Instagram pages of their own they appear on.

The TV personality brought all his children with him to Dubai over the New Year and after returning back to the UK, decided to break his usual rule when it came to showing his second son and daughter, by posting a snap of them from their recent family trip. 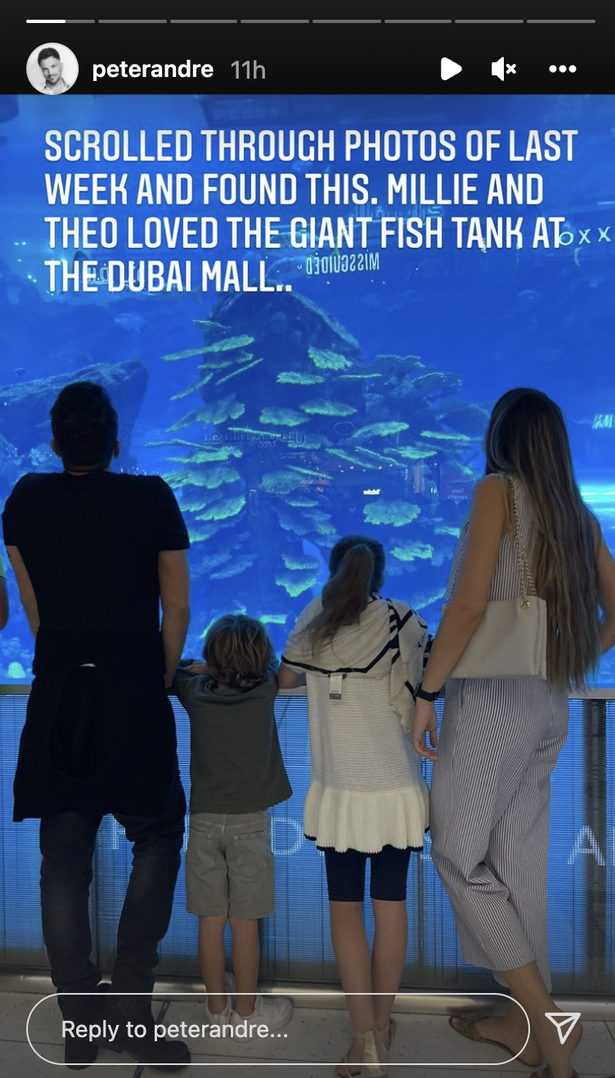 In the photo shared on Instagram Stories, Amelia and Theodore can be seen standing in between mum Emily and dad Peter, with their backs turned to the camera gazing up at a giant aquarium located inside a shopping mall.

“Scrolled through photos of last week and found this. Millie and Theo loved the giant fish tank at the Dubai mall,” Peter captioned.

The Andre family stayed at the Jumeirah Zabeel Saray suites in Palm Jumeirah while holidaying in Dubai and during their time there, posted various shots of themselves enjoying their time at the luxury location. In one photo Peter posted he is captured sharply dressed alongside his lookalike son Junior, who stood just as tall as his dad as they posed together in a foyer.

Another snap taken days ago showcased Princess happily sipping on a drink next to Peter as the pair spent some quality dad-daughter time together while sitting in the sun. It costs up to £2,400 to spend a night at one of the private lagoon villas at the resort visited by the Andres, which boasts its own residential entrance opening up to Turkish-inspired décor, a well-stocked kitchen and staff on hand throughout the day.

As well as taking in the sights of Dubai, Peter also performed while over there during New Year’s Eve and shared the special moment with his followers, posting a video clip alongside the caption: “Bringing in the new year with the wonderful guests of @jumeirahzs.

“Thank you for a wonderful stay. The staff, the service, the place. Wow. Thanks again for everything. Till next time. 2022, time for new music, film and more. Let’s go. Happy new year everyone.

“Ps. Also thanks to the band for learning the songs so quick and letting me get up on stage with you for a song or two.”

Jennifer Lopez Mocks Headlines About Her and Alex Rodriguez: Watch