The protection officer has served the Princess since 2010 when she became part of the Princess of Wale’s Royal Protection Order and has accompanied her at countless royal outings.

According to the MailOnline, Sergeant Probert, a member of Scotland Yard’s Protection Squad is trained in martial arts and carries a 9mm Glock pistol and a Taser stun gun at all times when with the royals.

Emma has worked for Kate for 12 years

She is also thought to wear a stab vest while on duty with the royals. Before working for Kate she was in charge of the security for Princesses Beatrice and Eugenie.

Emma, who is usually dressed discreetly in dark suits, opted for a fabulously floral ensemble in a stunning combination of navy blue and pale pink hues for her special moment.

She matched her glamorous look with an elegant navy fascinator which she paired with chic navy blue heels and a matching navy blue jacket. 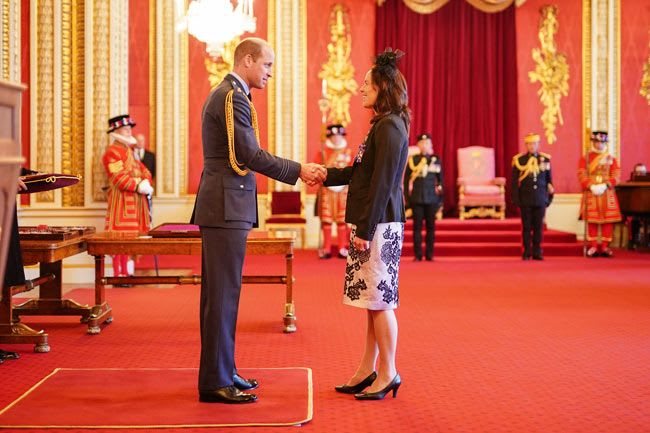 William and Kate are currently at the Queen Elizabeth Olympic Park to take part in a special charity event.

The pair will visit the Copper Box Arena to take part in a unique event with Coach Core who are celebrating their 10th anniversary this year.

The Royal Foundation launched the programme back in 2012 in response to the London riots which took over the city back in August. The programme moreover aims to bolster the impressive legacy of the 2012 London Olympic and Paralympic Games.

Since its launch, the now independent charity has provided sports coaching apprenticeships to more than 750 disadvantaged young people, many of whom have now started meaningful careers or re-engaged with their education.

Make sure you never miss a ROYAL story! Sign up to The Royal Explainer newsletter to receive your weekly dose of royal features and other exclusive content straight to your inbox.