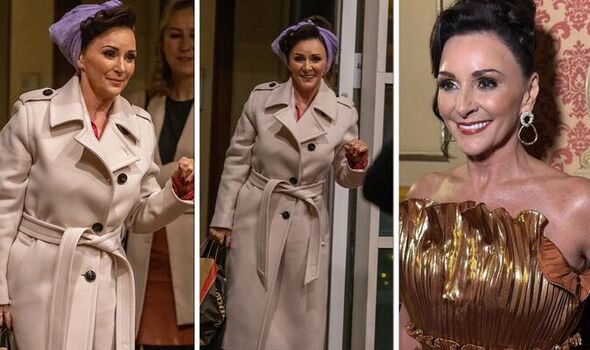 Shirley Ballas, 62, wowed fans on Saturday evening in her glamorous golden dress, with some even saying it was “distracting”.

Shirley Ballas, 62, wowed fans on Saturday evening in her glamorous golden dress, with some even saying it was “distracting”.

However, just hours later she appeared wrapped in layers as she headed back to her hotel room.

The cast of Strictly partied backstage following their Saturday show.

It was the first time the show has been to Blackpool since 2019.

Shirley was later spotted leaving with a Nandos bag in hand.

Shirley Ballas was spotted after the Saturday show

Shirley Ballas, along with the other Strictly stars, were spotted making their way back to the hotel after Saturday’s show.

Shirley Ballas emerged onto the street in a cozy jacket

Shirley appeared in a beige calf-length jacket, black boots and a purple headwrap.

Shirley Ballas was prepared for the night ahead

The Strictly star was seen bringing a Nandos bag back to her room.

Some fans even noted the golden dress was “distracting”.

Holding a coffee cup, Shirley shared a backstage glimpse at the Blackpool Ballroom before Saturday’s show.

Shirley declared she was “ready for Blackpool!”

Liam Payne Opens Up About Auditioning For ‘West Side Story’

Shawn Mendes and Camila Cabello: Its Over!