Paul Ritter stars as Martin in Friday Night Dinner in 2018

Friday Night Dinner star Simon Bird, 36, has shared a moving message to Paul Ritter following the news of his death earlier this week. The actor posted this via his co-star Tom Rosenthal’s Twitter account.

Paul sadly passed away at the age of 54 earlier this week after suffering from a brain tumour.

Since the news emerged, many of his Friday Night Dinner co-stars have been sharing messages in tribute.

Now Simon has broken his silence with a moving goodbye to his on-screen father.

The star does not have his own account so posted it via Tom’s Twitter to his followers. 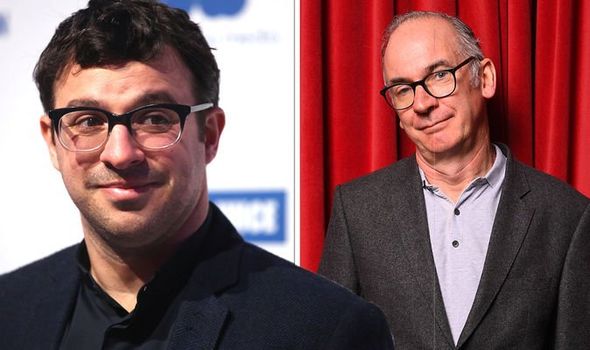 He wrote: “Not even going to touch the acting. That goes without saying. He was the best in the business.

“What’s less well known is that he was also the Platonic ideal of a green room companion: unfailingly generous (with praise, snacks, the Guardian Sport section); unendingly thoughtful (he would set up shop on the floor if he knew there were going to be more actors than chairs in that day); and undeniably cool (calm and collected in his flat cap, but an absolute coiled spring if there was a game in the offing).

“He was such a peaceful presence but throbbing with intelligence and – let’s not beat around the bush – entirely capable of a hilariously indiscreet and filthy broadside when in the mood.

“I think I’ll always aspire to be like Paul.

“I guess that’ll happen when someone pretends to be your Dad for 10 years.

“I feel unbelievably fortunate to have spent so much time in that green room and hope his real bambinos know how much his fake bambinos loved and looked up to him.”

Sarah Paulson Was Asked About All of the Lea Michele Allegations

'SNL' sketch asks what would happen if Donald Trump was black