Five months after breaking his back, Simon Cowell is proving that recovery is going well. The ‘AGT’ judge was photographed amid a shirtless iron pumping session while enjoying a boat ride in Barbados.

Simon Cowell may be on vacation, but he’s not slacking on his workouts. The 61-year-old judge on The X Factor was photographed pumping iron dumbbell weights while enjoying a boat ride out in the Barbados water on Jan. 13. Simon, who was only wearing swim trunks, showed off his biceps and toned six-pack as he flexed them amid this shirtless workout. 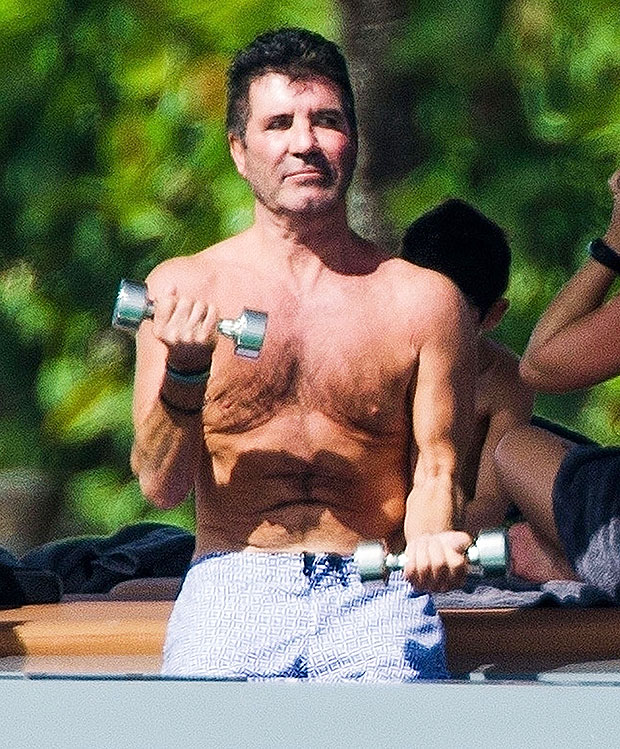 Simon’s girlfriend Lauren Silverman was on the boat as well, since she joined the former American Idol judge for their annual getaway to the Caribbean island. They have been in Barbados for quite some time; the couple was also spotted enjoying a yacht ride in the Barbados town of Bridgetown on Dec. 30, right before ringing in 2021 abroad.

Simon’s vacation — and Wednesday’s iron session — goes to prove that he’s on the mend, five months after suffering a serious back injury that left a back scar. “Simon has broken his back in a number of places in a fall from his bike whilst testing a new electric bike in the courtyard of his home in Malibu with his family,” his rep told HollywoodLife at the beginning of Aug. 2020. The rep added that Simon “was taken to hospital where they operated overnight.”

Unfortunately, the quick operation still didn’t allow Simon to attend the AGT grand finale in Sept. 2020. “There is a lot of work still to be done for Simon to get back to 100 percent, but he is looking forward to getting back on his feet, literally,” a source close to the TV personality EXCLUSIVELY told HollywoodLife at the beginning of October, adding that “rehab and relaxation” is what Simon needed at the time.

Simon and Lauren’s six-year-old son, Eric, had also been a huge help amid his dad’s recovery process, we learned. “[Simon] really is enjoying this time with Eric, and he is loving that Eric is actually a big help around the house and getting things for his dad throughout his recovery. Whether it is something like a drink or food or a book, Eric is really stepping up and helping out,” our insider added. And it looks like all that downtime has paid off, judging by Simon’s recent weight-lifting session!

Too Dangerous??? Grandma Is So Upset With Me Over This Present! | Perez Hilton And Family