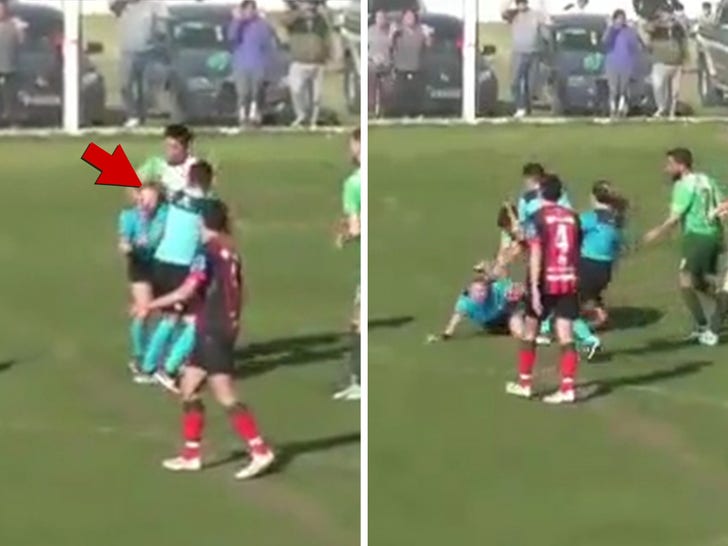 Horrifying scene at a soccer game in Argentina this weekend — when a male player absolutely lost it and attacked a female referee after being handed a yellow card.

It all went down during a third division match between Garmense and Independencia of the Tres Arroyos Regional League … when player Cristian Tirone unleashed on official Dalma Cortadi while her back was turned.

In video of the incident, you can see several players try to stop the attack … but to no avail.

Cortadi fell to the ground after the hit … but was eventually able to get back to her feet. She was later taken to a hospital, but luckily, she didn’t suffer any serious injuries.

Tirone was immediately taken off the field and arrested …. and Cortadi says she has filed charges against the player.

Garmense released a statement on the awful incident … saying, “Given the events that occurred this Sunday during the Third Division football match that was played in the city of Adolfo Gonzales Chaves between Garmense and Independencia, during which a player from Garmense physically attacked the woman who officiated as referee, the Club expresses its energetic repudiation of this action that is at odds with the spirit that is intended to instill with the practice of this sport.”

Tirone has been permanently banned from the soccer league … and Cortadi agrees with the decision.

“You have to kick him out forever,” she told La Nacion. “He should never be in any club. He is a violent person. He must also be in his daily life. I saw it on the video: a normal person does not do what this man did. No person deserves this. We don’t go to the [matches] to be beaten.”

Emma Roberts & Garrett Hedlund Are 'Very Serious' And Getting 'Excited' For Their Baby Boy To Arrive!