Ending their weekend getaway strong! Teresa Giudice was all smiles on the beach in Miami with Blake Schreck on Monday, February 18.

In the photos obtained by Us Weekly, the Real Housewives of New Jersey star, 46, rocked a revealing black one-piece bathing suit while the 26-year-old realtor went shirtless and matched her in black swim trunks. In Touch Opens a New Window. was first to report the news of the beach outing.

Us confirmed on Wednesday, February 20, that Teresa, who has been married to husband Joe Giudice since October 1999, was on vacation with Schreck and friends over Presidents’ Day weekend. The twosome were spotted holding hands on Saturday, February 16, and enjoying a cozy dinner with friends on Sunday, February 17.

The Bravo personality was first spotted with Schreck on New Year’s Eve 2018 at the Big Pink in Miami. A source told Us at the time that Teresa was “aggressively flirting” with him during the outing.

“Teresa had her hands on his leg,” the source said at the time. “At points, the two had their hands intertwined, and then the man was rubbing her leg in a romantic way.”

The Standing Strong author’s lawyer, James Leonard Jr., however, told Us in a statement that the December evening was just “a night out with friends, nothing more than that.”

Teresa and Joe share four daughters: Gia, 18, Gabriella, 14, Milania, 13, and Audriana, 9. After the spouses pleaded guilty to 41 counts of fraud in March 2014, Teresa completed her 11-month sentence the following year. Joe, meanwhile, is currently serving his 41-month sentence and is set to be a free man in March. However, a judge ruled in October 2018 that he will be deported back to his native Italy upon release.

Scroll through to see the photos of Teresa and Schreck’s beach day: 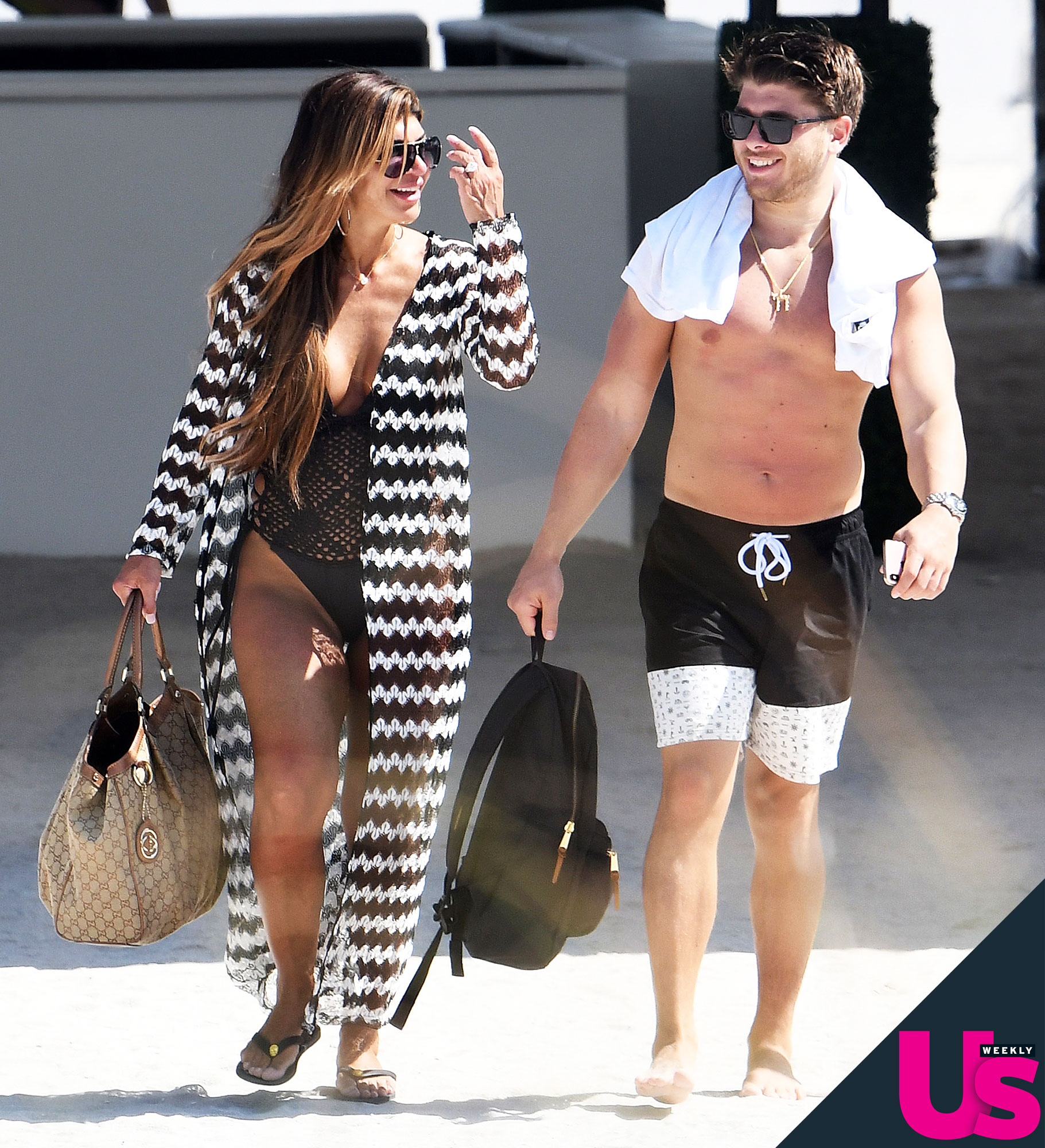 Teresa was wearing her engagement ring and wedding band during her beach day with Schreck. 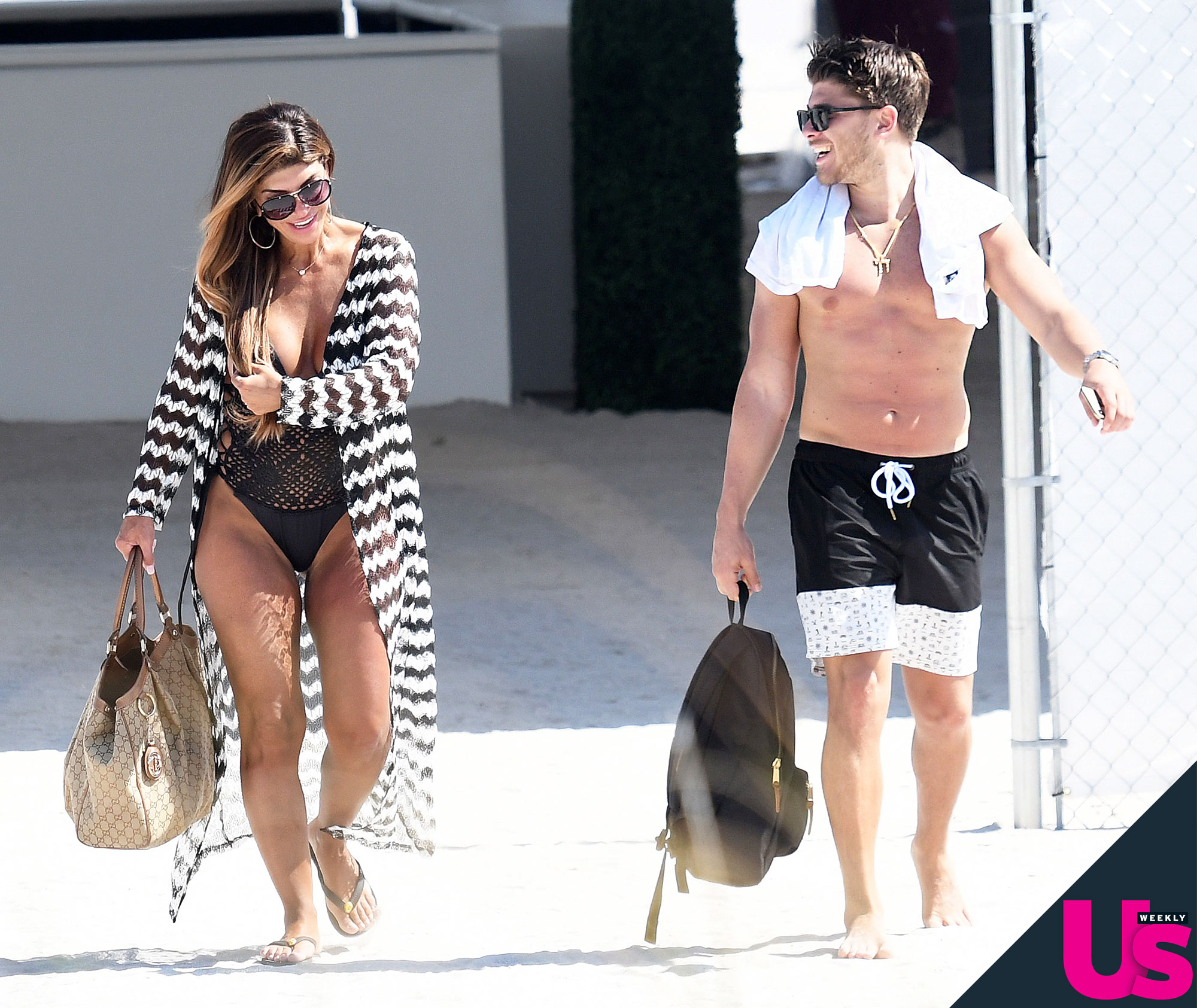 Fun in the Sun

The duo both grinned from ear to ear as they walked on the sand. 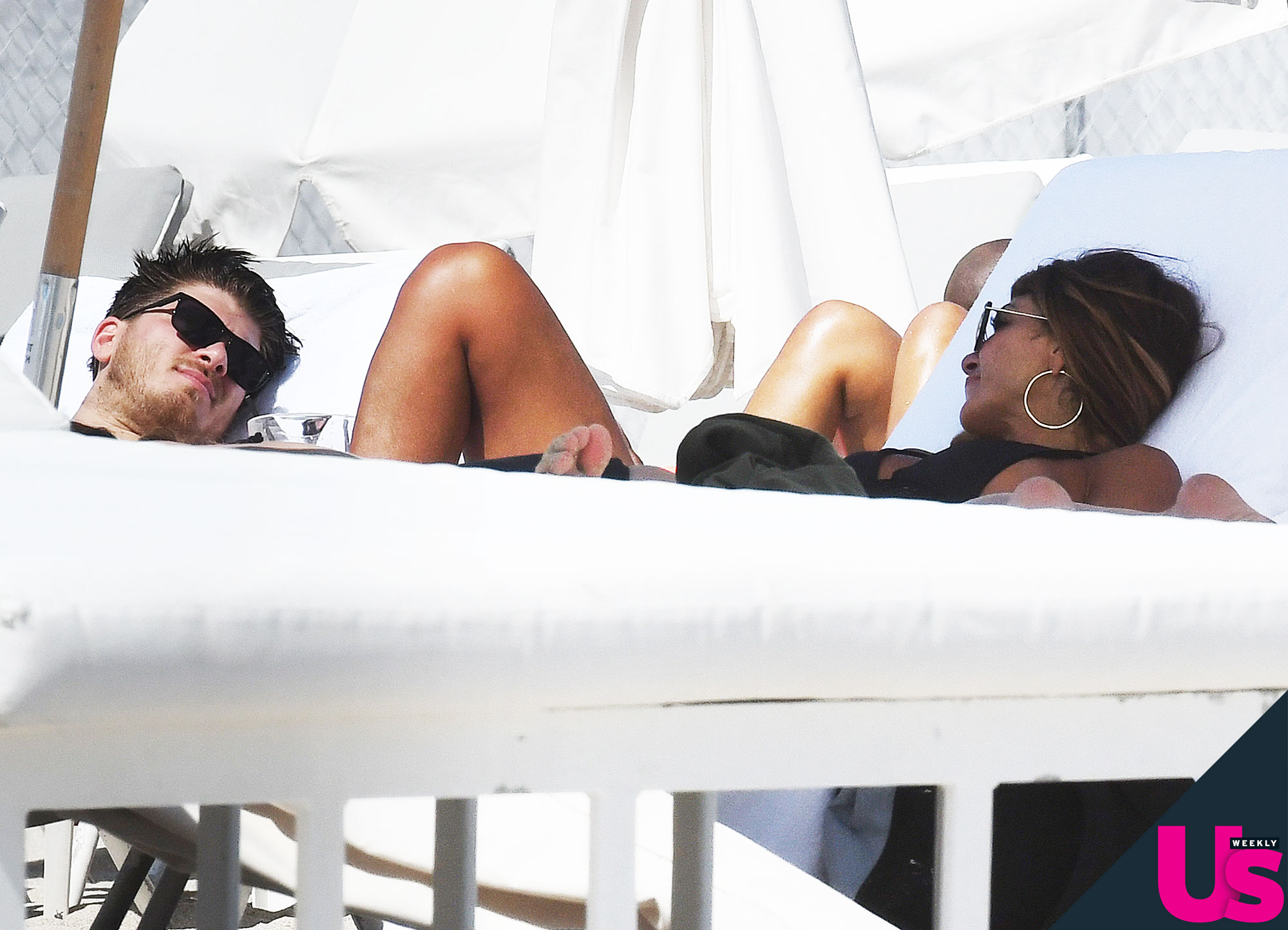 Something to Talk About

Teresa and Schreck appeared to be in good spirits as they chatted on the beach. 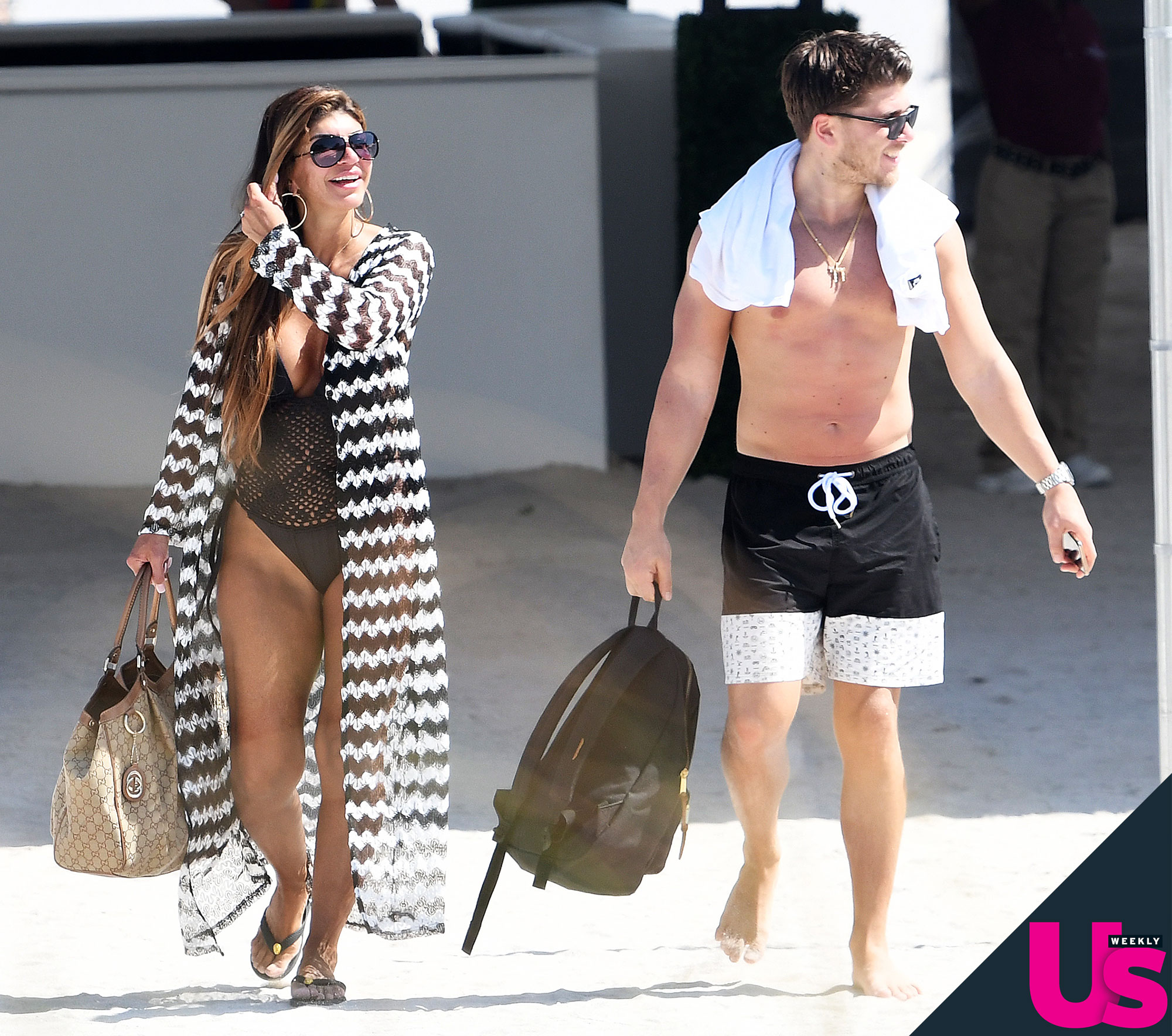 Schreck was spotted resting his hand on Teresa’s backside multiple times throughout their weekend getaway. 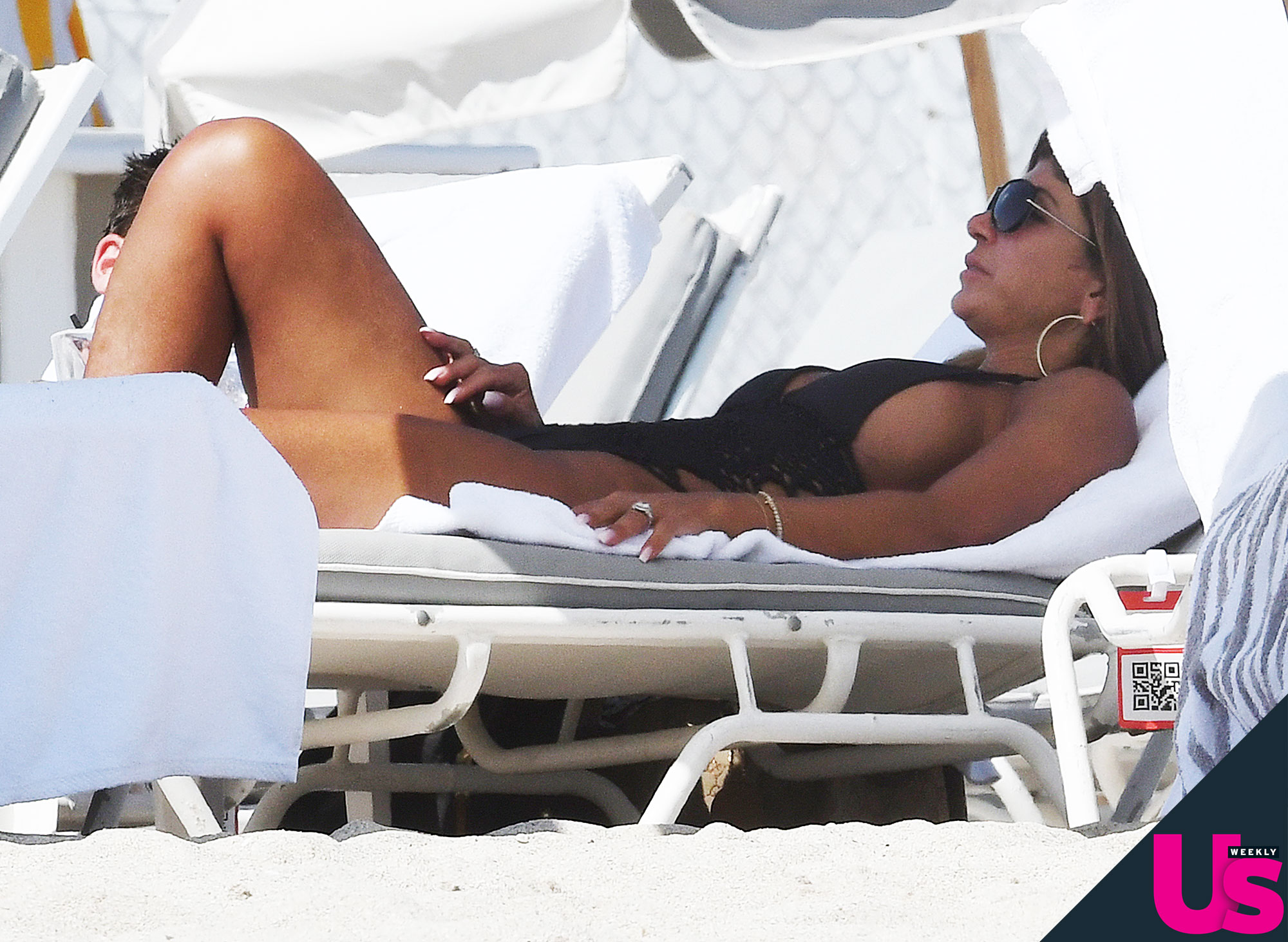 Teresa took a break from the sun and lounged under an umbrella.

Elizabeth Hurley, 53, Shows Off Her Cleavage In Strapless Bikini In Flawless New Pic