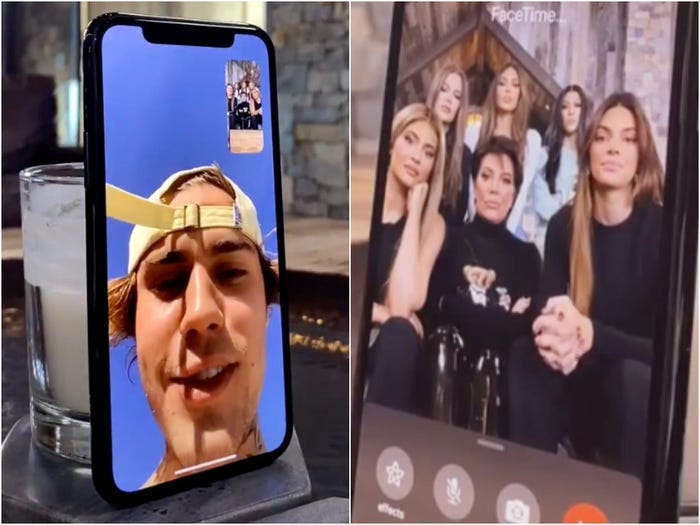 Khloe, Kourtney, and Kim Kardashian, and Kendall, Kylie, and Kris Jenner all gathered around the phone to play a prank on some of the most famous people in their phonebook. Prankees included Justin Bieber, Jennifer Lawrence, Dave Chappelle, Travis Scott, Jaden Smith, James Charles, David Dobrik, and Addison Rae.

Khloe shared a video of some of the highlights on her Instagram with the caption, "When the squad is deep."

"Is this real or is this a picture?" asked the family's friend Savas Oguz.

"Hey guys," said Bieber when he picked up the call. "What is happening?"

Scott, Kylie's ex-partner and father to her daughter Stormi, answered the phone in shock, asking, "What's going on? Bye!"

Others looked worried and asked if they were in trouble. Chappelle, for instance, physically jumped out of his seat and exclaimed, "Holy s—."

Smith, on the other hand, was unfazed and simply laughed when he picked up from an indeterminate location with a ceiling of flashing disco lights.

Kim also shared two videos on her Twitter, saying "this was fun." Rae, who has formed a close friendship with Kourtney over the last few months, looked bewildered when she answered. Charles had a similar reaction, asking "What is going on?" He later retweeted Kim's video, saying, "I thought I was about to get sued."

Dobrik took his mask off when he answered, as if to try and get a closer look at what was happening.