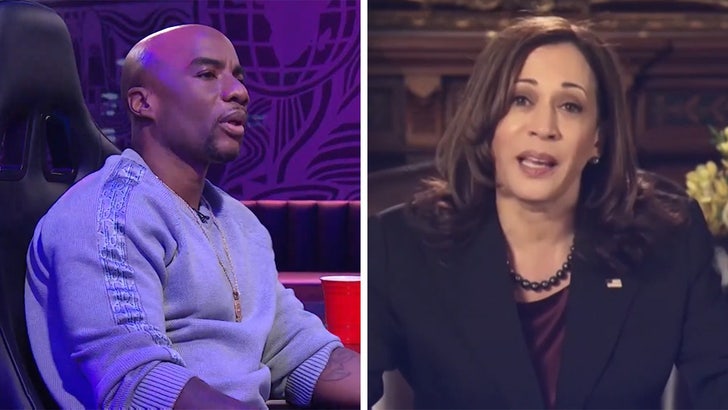 Vice President Kamala Harris isn’t having any talk about Sen. Joe Manchin being in charge of the U.S. government … and she clapped back when Charlamagne Tha God, legitimately, raised the issue.

The Veep chatted with Charlamagne Friday for his Comedy Central show, ‘Tha God’s Honest Truth’ … and it was a mostly congenial interaction. He asked Harris if she felt she gets “crucified” for every move because she’s a woman of color — and she sidestepped a direct response, saying she’s focused on her work, not her haters.

But, Charlamagne struck a nerve with his take on the current political standoff between President Biden‘s administration and Sen. Manchin over the “Build Back Better” bill.

He told the VP … “You get villainized for silly things like air buds, when [Manchin is] really stopping progress.” She played smart politics and refrained from attacking Manchin … whose vote they desperately need, if the bill’s gonna get through in some form.

When he followed up with, “So, who is the President: Is it Joe Manchin or Joe Biden?” … an aide for Harris jumped in to cut off the interview.

She went on to passionately explain that negotiating with the other side — even if that includes Manchin — is just part of the game in DC and, in the end, Charlamagne gave her props, saying … “That Kamala Harris — that’s the one I like.”

There Was a ‘Famous In Love’ Reunion This Weekend – See The Pics!