As you may recall, Jada Pinkett Smith recently decided to let her hair go by shaving her whole head. Taking to Instagram, Jada said that her daughter Willow Smith convinced her . “Willow made me do it because it was time to let go BUT … my 50’s are bout to be Divinely lit with this shed,” the actor wrote in July. Though inspired by Willow, Jada likely also shaved her head due to her past issues with hair loss.

In a 2018 episode of “Red Table Talk,” Jada opened up about her alopecia experience. “A lot of people have been asking about why I’ve been wearing turbans,” she said. “Well, I haven’t talked about it. It’s not easy to talk about, but I am going to talk about it.” As she explained, Jada first began losing hair while in the shower. “It was terrifying when it first started,” she recalled. “And I was just like, ‘Oh my God, am I going bald?’ It was one of those times in my life when I was literally shaking with fear.” So, in order to mask the loss of hair, Jada began wearing turbans. “When my hair is wrapped, I feel like a queen.”

Meanwhile, Willow spontaneously shaved all of her hair in 2012, when she was only 11 years old. “We came downstairs and she had shaved her head bald,” Will said in 2017 (via E! News). “I was like, ‘Oh, s**t.'” What was his reaction to seeing Jada bald, though?

Will may be Jada Pinkett Smith's biggest fan 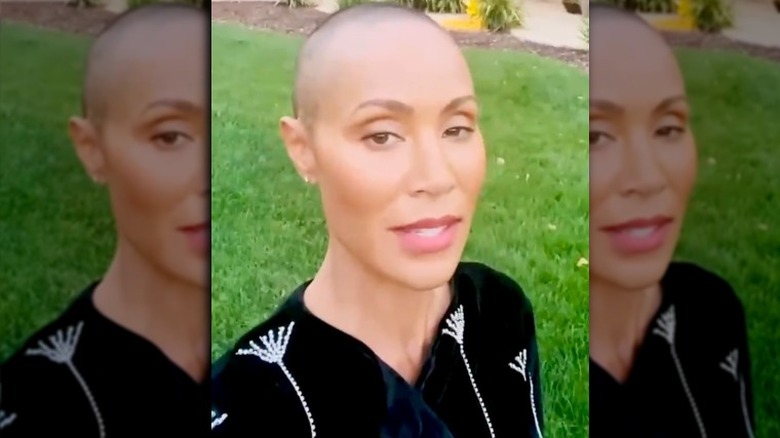 On the latest episode of “Red Table Talk,” which aired on September 15, Jada Pinkett Smith sat down with guest Tiffany Haddish, alongside daughter Willow Smith and mother Adrienne Banfield-Norris. At some point during their chat, Haddish asked Jada about Will Smith’s reaction to her shaving her hair. “What did Will say when you cut your hair off? How did he respond?” the comedian asked (via Us Weekly). “He loves it,” Jada said. Willow also shared that, at the time, she received a text from her father saying how Jada looks “stunning.” How sweet!

Later in the episode, Jada further discussed saying goodbye to her hair. “It was just time,” the actor admitted. “I was just ready for that kind of expression and release. I’m so glad I did it. It was such a beautiful experience and such a freedom.” Jada also said that she now feels “more connected with [herself] and to the great diving,” adding that this experience taught her to simply stop caring what people think.

Haddish, who shaved off her hair in the summer of 2020, shared similar sentiments as the host. “During that pandemic time — the beginning of the pandemic, I was reading the Bible more, checking up on the Torah and everything,” she said on “Red Table Talk.” “Everything is talking about ‘know thyself, know thyself.’ And that just kept resonating with me,” Haddish continued. “I’m like, ‘Okay.’ When I hear things, I take it literal.”

How Many Michelin Stars Does Gordon Ramsay Have?

Stephanie Pratt Hits Back at Brother Spencer for Calling Her ‘Evil’: Your Wife Is the Devil

Kelly Ripa Gets Candid About Her Son Joaquin’s Dyslexia