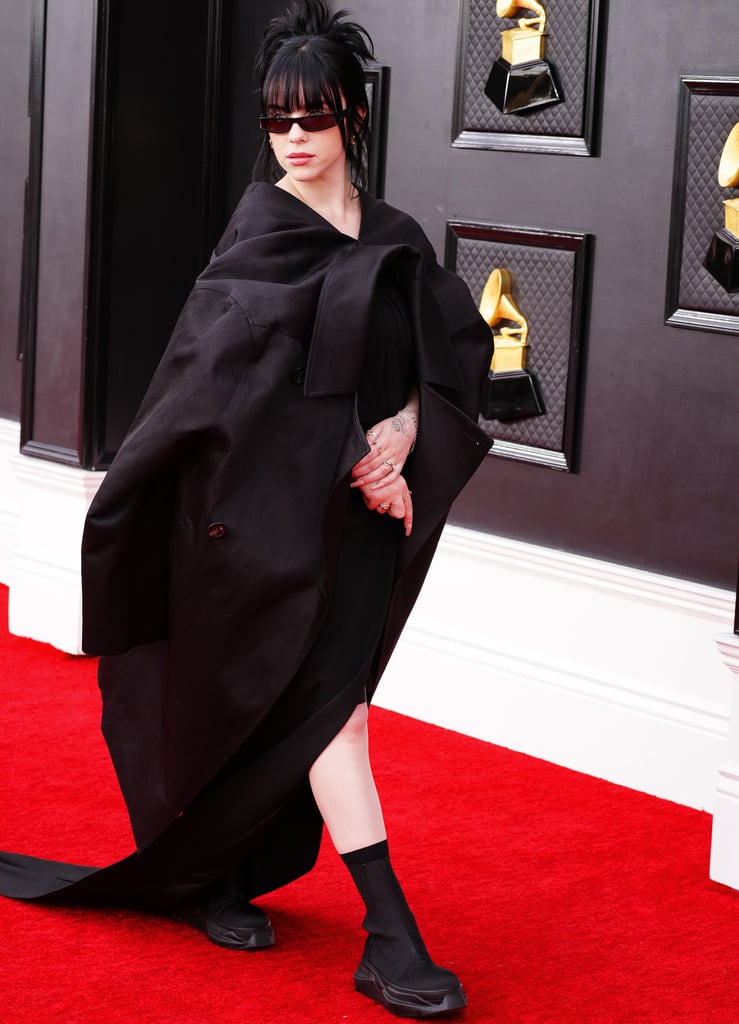 Billie Eilish went architectural with her 2022 Grammys red carpet look. The singer — who recently won her first Oscar alongside brother Finneas and already has seven Grammys under her belt, with seven more nominations tonight — glided into the Grammy spotlight in a baggy Rick Owens trench coat deconstructed and worn off-kilter so that the collar hung loosely across her chest. Forgoing sleeves, Eilish’s arms came through the front of the garment, and two buckles across the back kept her, quite literally, strapped in. A floor-sweeping train that trailed behind her added a dramatic effect. As for the accessories, she opted for black neoprene sock boots with thick rubber soles, micro rectangular sunglasses, a silver chainlink bracelet, and rings embellished with miniature gold hoops to complement her earrings.

Eilish is set to perform at the 64th annual ceremony, and she’ll likely change for her onstage appearance, just like she did at the Oscars when she sang “No Time to Die.” Eilish stuck to a similar all-black color palette on that evening, too, choosing a voluminous ruffled Gucci gown, which she later swapped for a Simone Rocha minidress at the Vanity Fair afterparty (Eilish later responded to critics on TikTok who had placed her look on worst dressed lists). With this edgy moment wearing American designer Rick Owens, Eilish’s Grammys outfits are destined to be widely discussed among the fashion set, although she’s already made it clear that she doesn’t give much thought to other people’s red carpet critiques. Scroll on to check out all the angles of Eilish’s bold, jet-black moment from the Grammys 2022 red carpet.

Why are Kinder Eggs banned in the US and are the chocolates illegal anywhere else?