Alone and filled with dread, Jillian Broadbent says she “dared not think that this could be the end” as she stayed with her long-term friend Carla Zampatti after the fashion designer had “catapulted” down the stairs at La Traviata on Sydney harbour, a fall which would ultimately claim her life six days later.

Former Wollongong University chancellor and a sitting board member of the Reserve Bank of Australia, Ms Broadbent gave an emotional account to Radio National on Thursday morning of her friendship with Zampatti, which had spanned many decades, and the circumstances of the fashion icon’s accident. 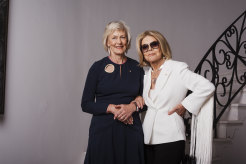 Ms Broadbent with her friend Carla Zampatti at the designer’s home in 2018.Credit:James Brickwood

Ms Zampatti, 78, had arrived in her trademark glamour, wearing a navy evening gown set off with a dazzling pearl, aquamarine and diamond necklace.

An avid patron of the arts, Ms Zampatti had enjoyed the opera production and enthused to her friend during the interval as the women reclined on the harbour’s wall about how “beautiful the harbour and Sydney was and how lucky we were that people could come together again”.

Carla Zampatti arriving at the premiere of La Traviata on Sydney’s harbour.Credit:Don Arnold

But the evening was to take a devastatingly tragic turn after the performance ended as the women began to make their way out of the makeshift bleachers at Mrs Macquarie’s Chair.

“I was holding on to her going down the stairs and I think she tried to get her heel out of the stair and just catapulted onto her head,” Ms Broadbent told host Hamish Macdonald.

“I was filled with dread … but I didn’t dare think it was going to be an end like that.”

Ms Broadbent said she stayed with Ms Zampatti waiting for an ambulance and was able to reach members of Ms Zampatti’s family “fairly quickly”, joining them at St Vincent’s hospital shortly after.

“We are all starting to come to the view that she would have liked to go out on top … so I’m trying to tell myself that,” a clearly emotional Ms Broadbent said.

In the days since Ms Zampatti’s death on Saturday morning, after spending almost a week in hospital, Ms Broadbent has reflected on the “happy times” she had shared with her friend.

“I’m moving from deep sadness to celebrating our friendship, reflecting on the happy times we had and the incredibly supportive friend she was,” she said.

“If I think about why we were so close, I wonder sometimes … we had contrasting experiences and backgrounds, we had such mutual admiration, it really buoyed you up when we were together.”

They also had contrasting political views, which Ms Broadbent said they would often “have healthy arguments over” which usually “ended in laughter”.

“There is a tendency to think people in fashion – that [the industry] is fairly frivolous. But what she really loved about fashion was that people could put on her clothes and feel empowered. People did buy them when they were giving a speech or going to a special wedding.

“She loved that response she gave women through her clothes,” she said.

“She was a very strong feminist but I think she believed in the beauty of clothes and the beauty of women, she wanted to complement them. She just believed women could do anything … and better.”

As for her friend’s legacy, Ms Broadbent said: “Her legacy is a combination of glamour, power, can-do and success … and the migrant story as well. You come to Australia with nothing, you build up yourself and back yourself.”

“There were times in her life when people encouraged her to do things she didn’t think she could do and I think it was very important for her to spread that spirit to other people.”

Plans for a state funeral in Sydney for the designer are due to be released imminently.

I always go naked in the house like Amanda Holden, my kids hate it but every mum should do it