A mutual friend at work had set us up, and from the moment he walked into that dark hipster bar, late and apologetic, I knew he was The One.

My friend was right, he was so my type: sleepy eyes and a crooked smile, shirt half-untucked and already a little drunk. From the way he ordered (a pint and a shot), he probably didn’t notice that I was too. Or if he did, he wouldn’t have cared.

I was halfway through my third drink, entering that crucial pre-slur stage where things could go either way. I could hit optimal adorableness, which, on a good night might last half an hour at most.

If I stuck around for more, I might tip into problematic. I’d talk too much and laugh too loudly. I might tell him something intimate about my family, pivoting into a public make-out session just to change the subject. Who could say?

Or I’d black out.

That was happening more frequently. Worse was when I’d suddenly black back in — Hello, you went away there for a second. As I rejoined the conversation, my expression was that of a child trying really hard to re-enter a double Dutch game without messing up the skipping ropes.

By 37, I was no longer a functioning alcoholic. I was a barely functioning one, my body unable to predictably process its usual intake of alcohol. Once, I knew precisely how three, four or seven drinks would hit me.

But then I could get drunk on two, or remain stubbornly sober after drinking a bottle of wine, a near nightly habit by that point. I had no idea this was biochemical, something to do with enzymes and the pancreas and eventually the liver. All I knew was by the end of that night, despite the fact that I was such a mess, or maybe because of it, I had landed myself a new boyfriend, someone cute who drank like me, which is to say: a lot.

All my great loves were big drinkers. I wasn’t one of those alcoholics who paired up with caregivers, guys who ran underneath me with a net, or nudged me to watch it when I’d had a little too much.

I couldn’t think of anything worse than that kind of codependency. I was more about co-debauchery. My kind of guy had to keep up with me, or vice versa. When we fell for each other, we fell hard. We didn’t just move fast, we moved in. Together. Like, right away. Why wait for someone to really get to know you, because what if they really got to know you?

My first fast live-in love was a guy I met at one of those after-hour drunk fests at the restaurant where we both worked. Six weeks later I quit college to travel across the country with him. When we broke up two years later, we were living in a van in the Yukon. I had cheated so he took the van, leaving me out of a home.

Then there was the next one, from the ad agency where I was a receptionist over a summer. A month in, he asked me to help him with his résumé. In exchange he took me out for lunch. That was Friday.

By Tuesday he’d moved in with me, the lunch date smearing into a lurid lost weekend that involved a chipped Noguchi table, swimming topless in a public pool in the middle of the day and lighting a small fire on his balcony. Getting him kicked out of his apartment complex was a happy accident. We were already in love. How could we not be after going through so much together? We had enough in common to make a go of it, especially the partying part.

That’s what I called my drinking back then: partying. I partied. He partied. And party we did. We also fought when we partied, then drank to shove down the resentment from things we said to each other when we partied too hard.

I’d cycle through a few more similarly fraught relationships by the time I met The One, though they were getting shorter, ending sooner, quickly combusting into a haze of transgressions, both of us feeling like it was all the other one’s fault.

“Uh huh. Is he already living with you?”

“No! He just … sleeps here every night.” I sounded too defensive. She’d see what I saw in him when I brought him home for Christmas, something about which I was not entirely wrong.

It was the morning after we got in late for the family gathering.

“He’s an alcoholic,” she said, handing me a coffee. He was still passed out upstairs, the children wondering why he hadn’t come down for presents.

Before I could defend him, she said, “I don’t want you bringing guys like this home anymore. I’ve got little kids.”

Guys like this? What was she talking about? This was The One, who had arrived just in time for me to catch up with the rest of my adult friends and finally settle down. Start having babies. I didn’t need this from her, a single mother barely making ends meet, someone I couldn’t even party with anymore because she had little kids. What did she know about relationships?

But he had already moved in. It made total sense after he was fired from his brokerage firm, through no real fault of his own. People just didn’t get him. We could pool our resources. Support each other through tough times, because that’s what couples do. And we were a couple now.

A couple means two, though, and he was seeing someone else, secretly, someone he’d been texting on Christmas morning, which is why he missed presents. I discovered this much later, while he was passed out on my couch, his unlocked phone calling out my name, telling me I was only snooping to confirm that he was not cheating on me, not that he was.

The next morning, he was gone, the latest victim on “CSI Relationship,” my own personal procedural that followed the same format every breakup. I’d wake alone, tiptoe over the crime scene, scanning for clues as to what the hell happened last night. Three empty wine bottles on the kitchen counter. Half a pint of Scotch in the recycling. Oof. Broken wineglass in the sink. His shoes and clothes missing. Ashtray overturned on the carpet.

There is a spiritual axiom in recovery that goes: You become psychologically stunted at the age in which you first begin to drink problematically, to numb emotions. For me, that was 15. That’s why I fought like a rancid teenager well into my late 30s, making big scenes and spilling tears, in public and private.

Apologies were for losers, giving and receiving them. No room for reason or discussion. No compromises. It was over. I never wanted to see his sorry face again, because if I did, I would … probably get back together with him.

But this time was different. Days later, instead of calling him for that getting-back-together hit of dopamine, I found myself dialing a 12-step organization a friend had joined a few years earlier. As I regressed, my friend seemed to be doing something rather remarkable: along with staying sober, he was growing up.

The next day, by some miracle, I went to a meeting. The compulsion to drink soon left me, but thoughts of my ex lingered. My new sponsor suggested I wait a month before seeing him. I didn’t listen.

When we met two weeks later, he was remorseful and sad. He told me he missed me. I told him about the meetings. Maybe we could be one of those miracle stories, where we both see the light and have a healthy, happy ending. But instead of being proud of me, he told me to be careful, that by getting sober I might just lose my edge.

“You’re an artist. Artists drink,” he said, taking my hand. “You don’t have to change for me.”

Too late. I was sober enough to know that he was as wrong about this as we were for each other.

Thirteen years later I wish I could say sober relationships have been easier. They’ve definitely been less dramatic, usually ending quietly, for reasons that are obvious to both of us.

But I still think of him as The One, the one who brought me to my knees, the one who woke me up to my real problem, the one who showed me the way toward a healthy relationship, even if it’s just with myself.

Lisa Gabriele’s latest novel is “The Winters,” a modern response to “Rebecca,” by Daphne du Maurier’.

Rites of Passage is a weekly-ish column from Styles and The Times Gender Initiative. For information on how to submit an essay, click here. ​To read past essays, check out this page. 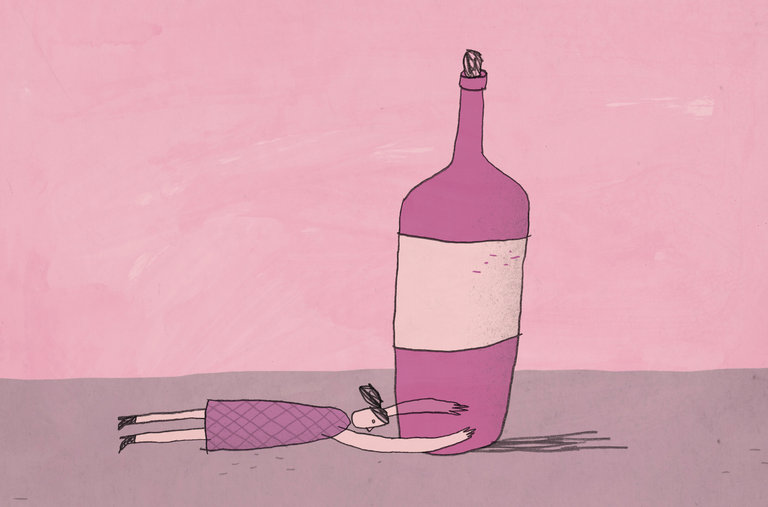 See All the Wildly Expensive Products in the Oscars Swag Bag