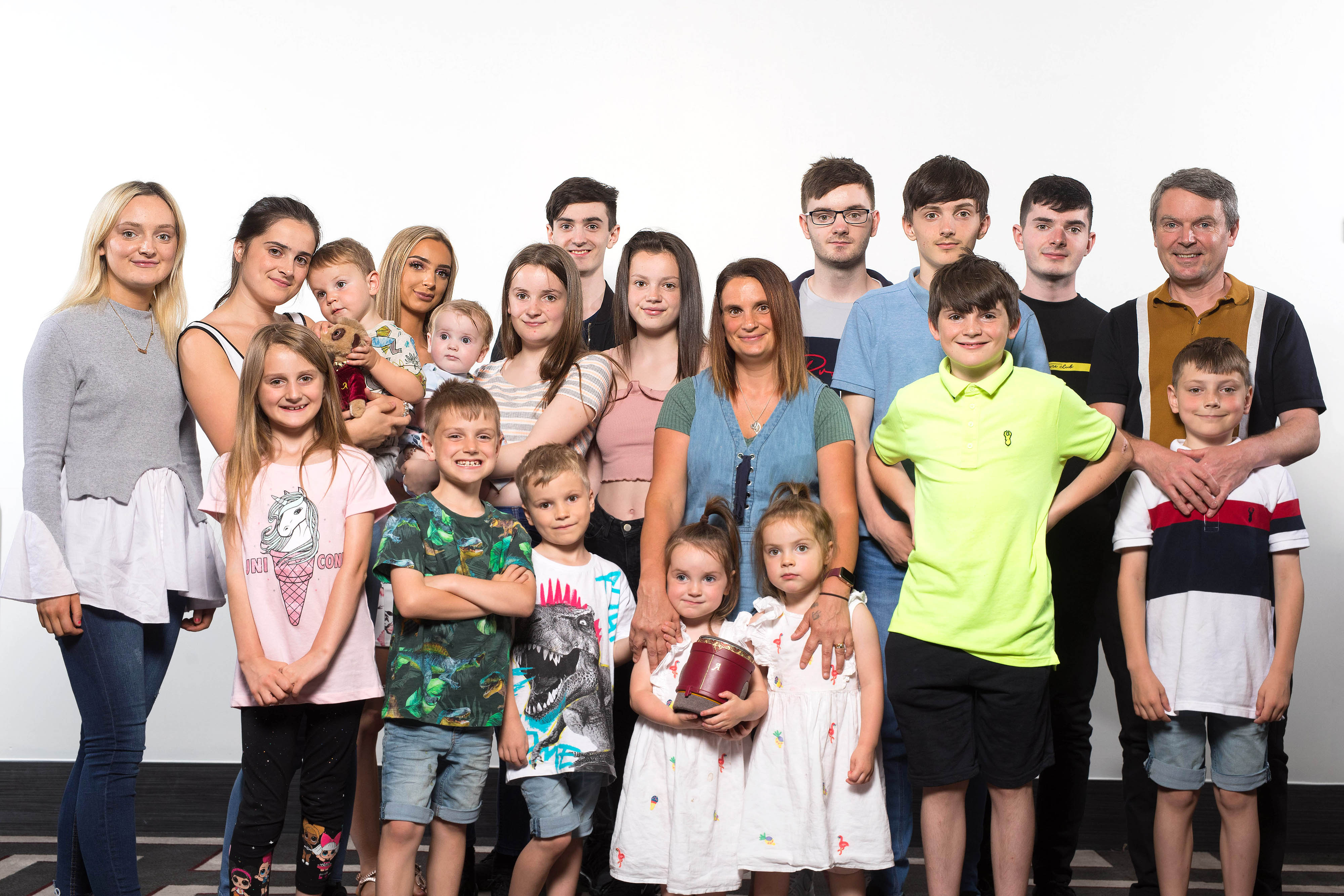 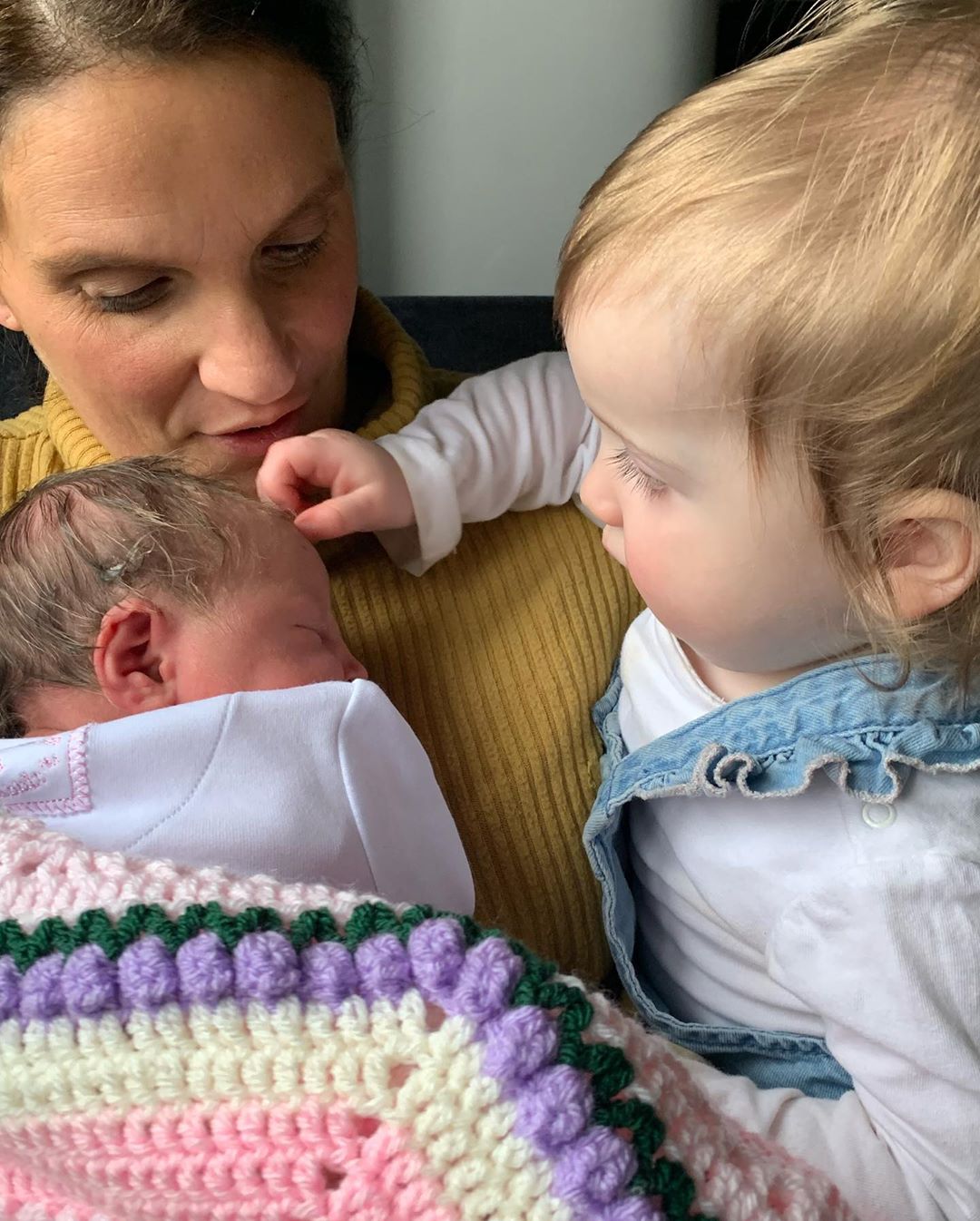 The parents famously don’t claim benefits and rely on Noel, 49, and the family bakery business to make ends meet. But they’re not immune to criticism – especially at the moment. Sue recently revealed that the 24-strong family get ‘death stares’ for taking their daily exercise together: “They think we are having a kids’ birthday party or something.”

The supermum, who has spent more than 800 weeks of her life pregnant, has sworn this will be her last baby — but has said the same in the past.

The king-sized family certainly isn’t the only one who thinks the more the merrier when it comes to kids. Meet some of the world’s biggest broods… 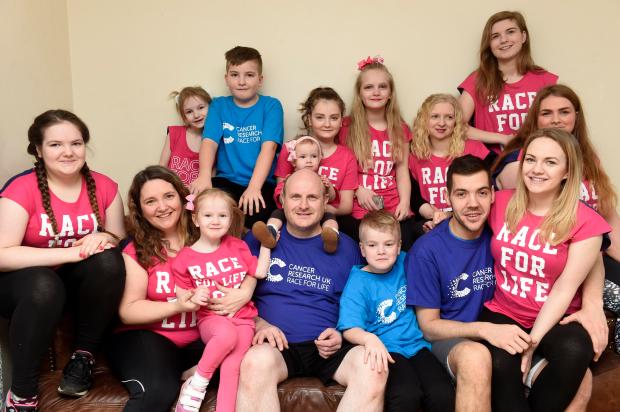 Emma and Roy Hann are proud parents to 13 children aged between five and 28 – with ten still living under their roof.

The family gets through 50 pints of milk, 21 loaves of bread and five large cereal boxes a week – and their washing machine is rarely turned off.

"My family are everything to me. Being a mum with 13 children has challenges," she says.

It's exhausting and every night when I fall into the bed I'm asleep in seconds.

"It's exhausting and every night when I fall into the bed I'm asleep in seconds. I wouldn't have it any other way though as I love family life.”

The bumper brood have to lend a hand around the house to help keep their six-bedroom home in order.

New lockdown rules include no TV if the house isn’t tidy, the kids clear away their own dishes after meals and they take it in turns to prepare dinner.

The Bretts: Mum-of-ten boys gets up at the crack of dawn and vacuums the house SEVEN times a day 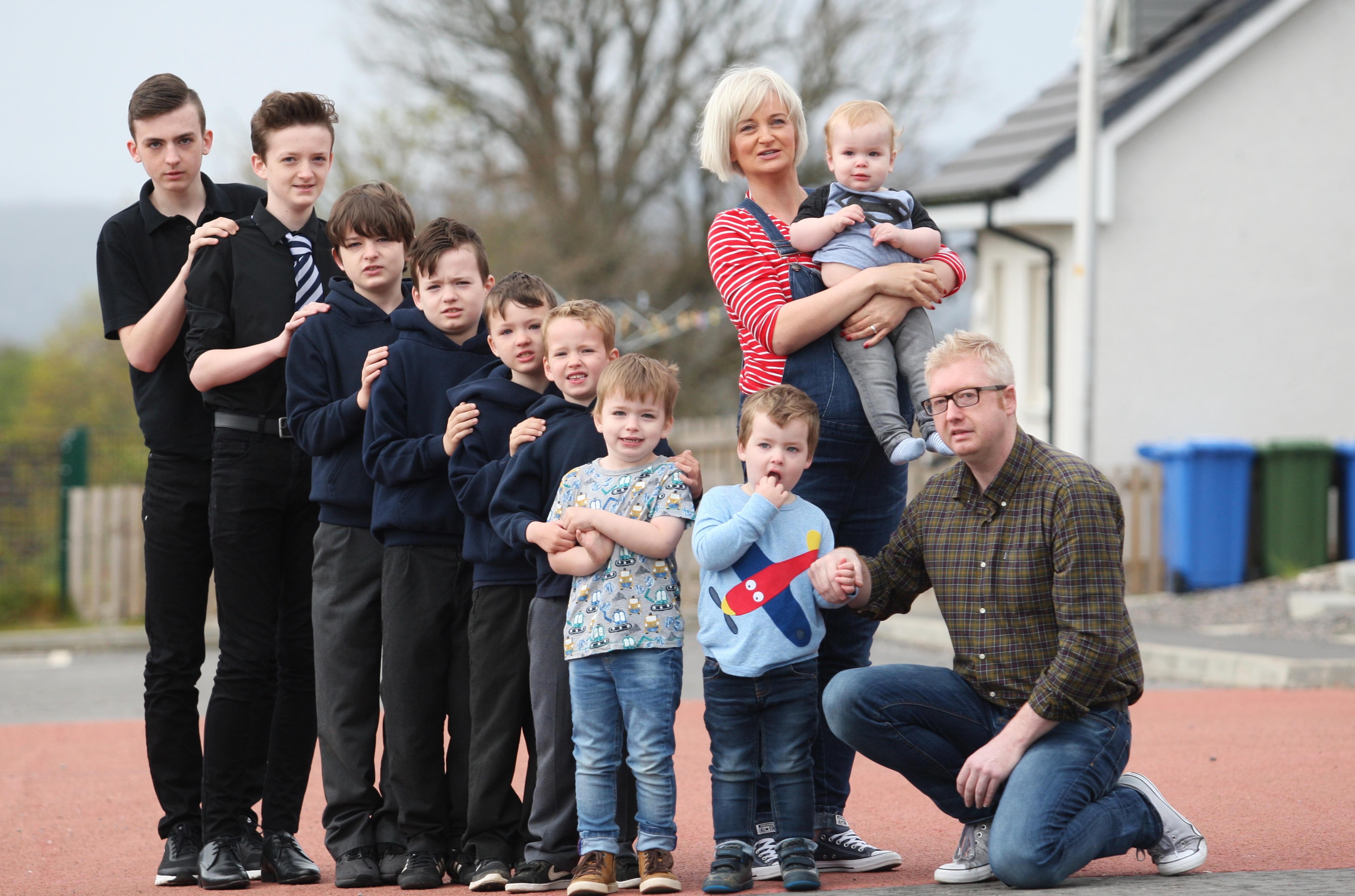 Britain’s busiest mum runs her house like clockwork to keep up with her brood of ten boys.

Alexis Brett, 40, gets up at 5:30am every morning to get dressed and do her make-up before her sons even wake up.

A typical day includes vacuuming the house seven times, putting on five loads of laundry and lighting a few scented candles along the way as she fights to keep their five-bedroom house looking – and smelling – fresh.

The bumper family from Inverness, Scotland, go through an astonishing 90 bags of crisps, 1kg of pasta, 14 loaves of bread, eight boxes of cereal and six bottles of squash every week.

The pair have welcomed a new baby boy every two years for the 15 years.

Alexis was working as a rail hostess on the trolleys when she met train conductor David in 1998 and three years later fell pregnant with their first son Campbell, now 18.

That set the wheels in motion: The pair welcomed a new baby boy every two years for the 15 years.

Alexis and David, who has Parkinson’s Disease, are thought to be the first couple in the UK to conceive ten boys in a row. But they didn’t keep going for the reason everyone expects. 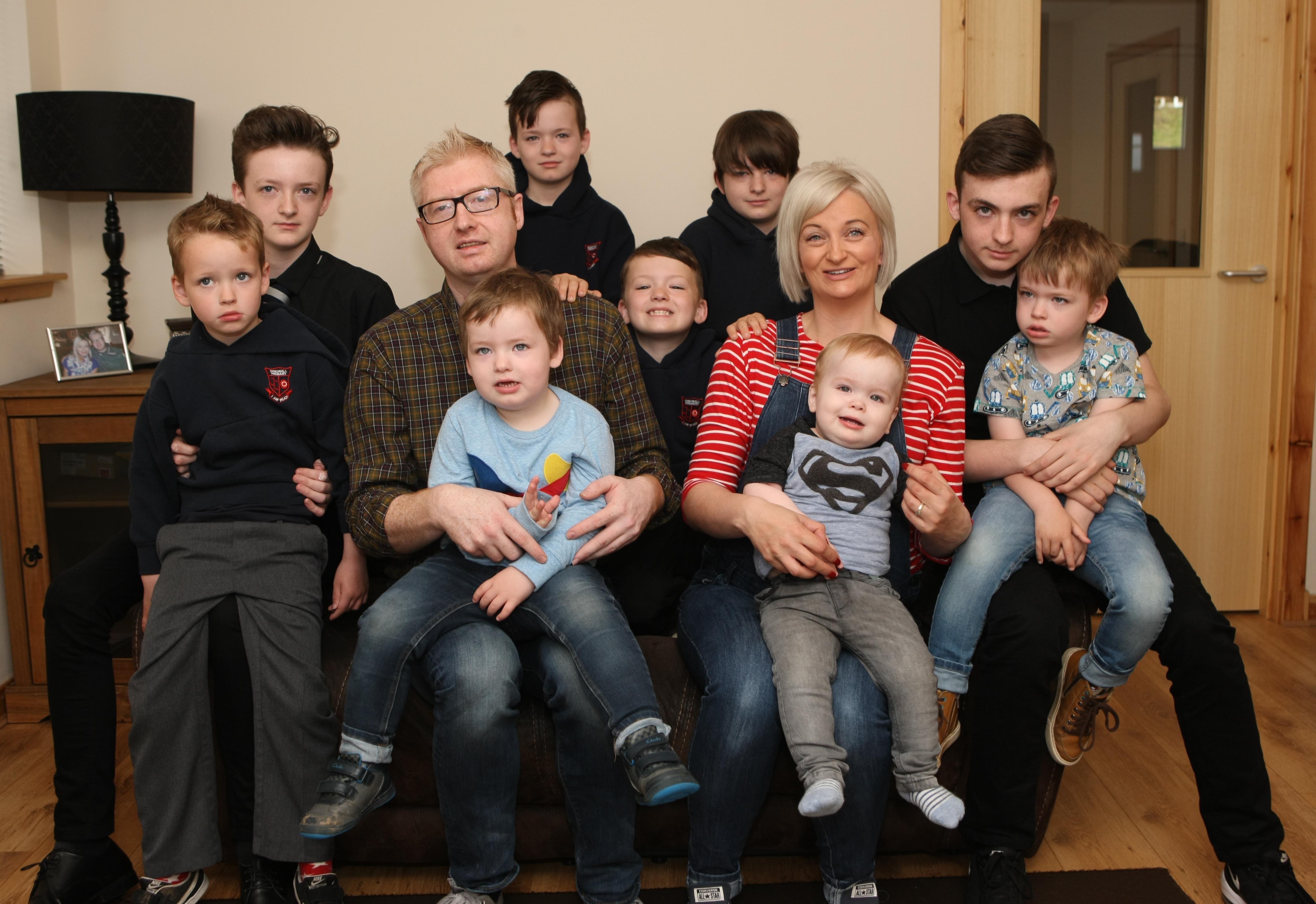 The mum-of-ten told the Daily Mirror: "At every 20-week scan, we found out the sex, but I’ve no idea why we bothered as, deep down, we already knew. It’s amazing I’ve had so many boys.

"People always ask if I have I been trying for a girl. But I can honestly answer 'no'. I’m happy with my boys. I wouldn’t have a clue what to do with a girl now."

The Bonnells: Australia's biggest brood where the kids do chores as soon as they turn eight 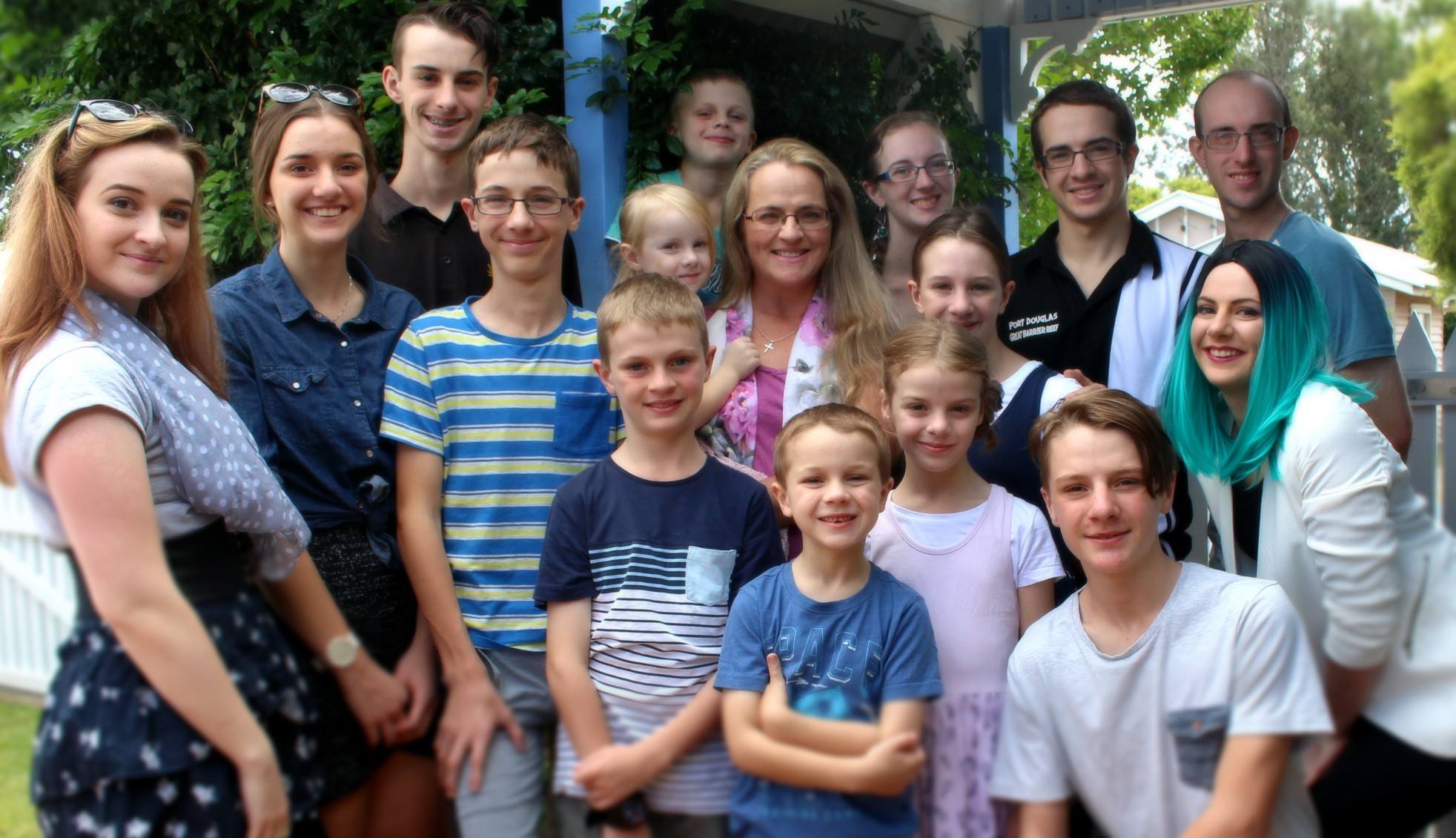 When Jeni Bonell and her husband Ray first met, they never would have guessed that one day they’d become Australia’s biggest family.

Jeni, 50, told Mamamia: “Ray wanted at least four kids. I thought that was crazy. Like, who has that many children?”

Fast forward more than three decades, and Jeni and Ray are parents to 16 children between the ages of four and 29.

The supermum said: “I agreed to have one, maybe two kids, but it was actually me who asked for number three because I loved being a mum so much.”

Jeni, who also has three grand-children, did the brunt of the housework for many years, but now any child aged eight or over is expected to chip in.

“Our job roster came about back when we had number six or seven. I felt like I wasn’t teaching them these skills and how to give back to the family,” Jeni said in a YouTube video on their channel.

If you live here, you work here and you have to contribute. You have to do your job

“If mums are doing all the jobs all the time, no one is having any fun,” she added.

“If you live here, you work here and you have to contribute. You have to do your job.”

And it clearly works: Their 12-year-old can put a roast dinner on for 20 people ‘with almost no supervision’ – something most parents could only dream of.

The couple, from the coastal state of Queensland, spend up to £320 a week on groceries for their brood of nine boys and seven girls. The weekly shop includes 36 litres of milk, 14 boxes of cereal, 45 tubs of yoghurt and 24 rolls of toilet paper – something that became contentious during lockdown when stockpilers were hogging headlines (and loo roll). 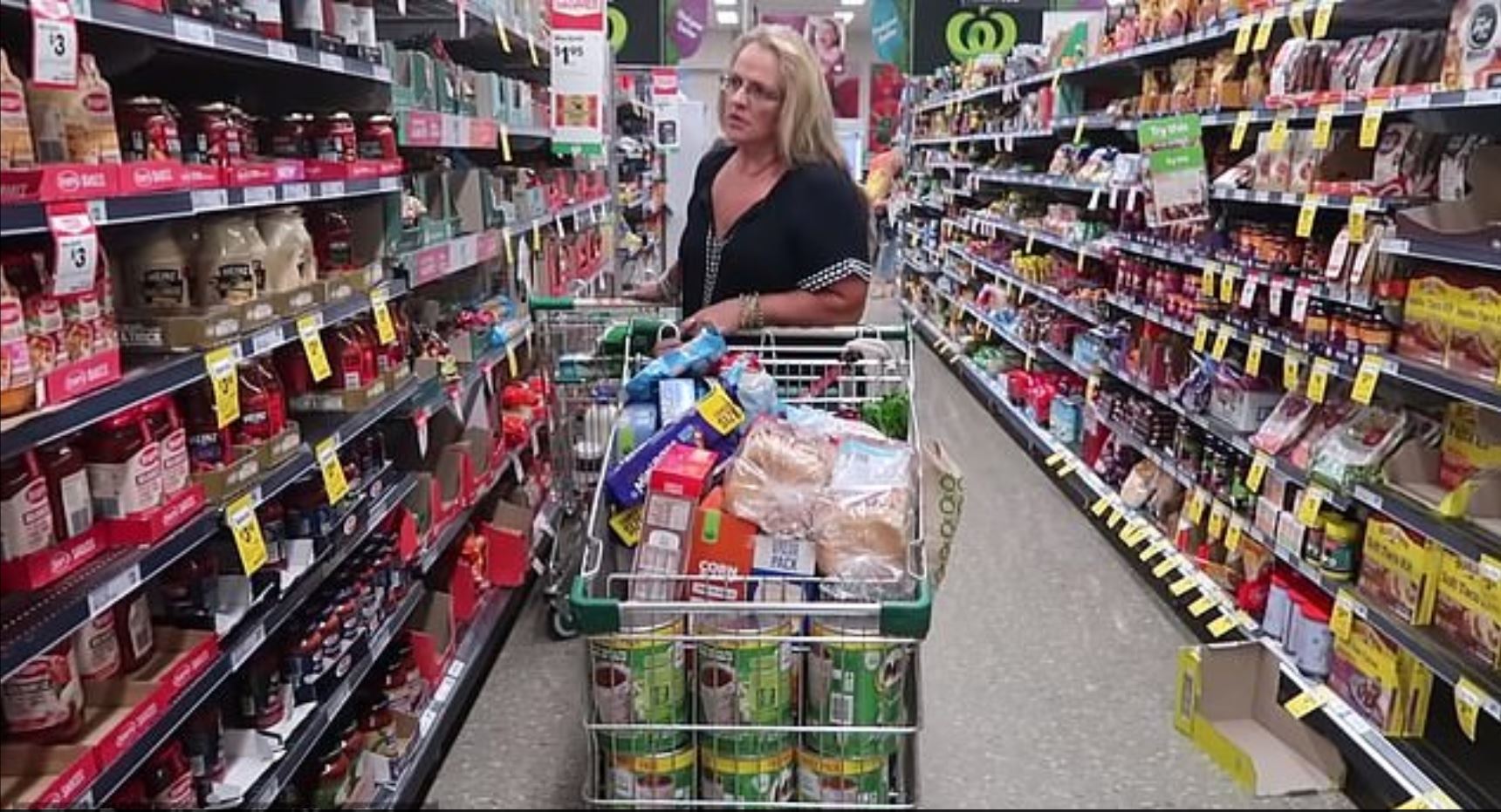 The frustrated mum-of-16 recently told Fabulous how she was forced to stick a sign to her supermarket trolley explaining she wasn’t panic-buying.

The sign said: "Not hoarding, just feeding 16 kids. Be kind and go away please."

The Casons: Mum-of-18 says she 'desperate for more' 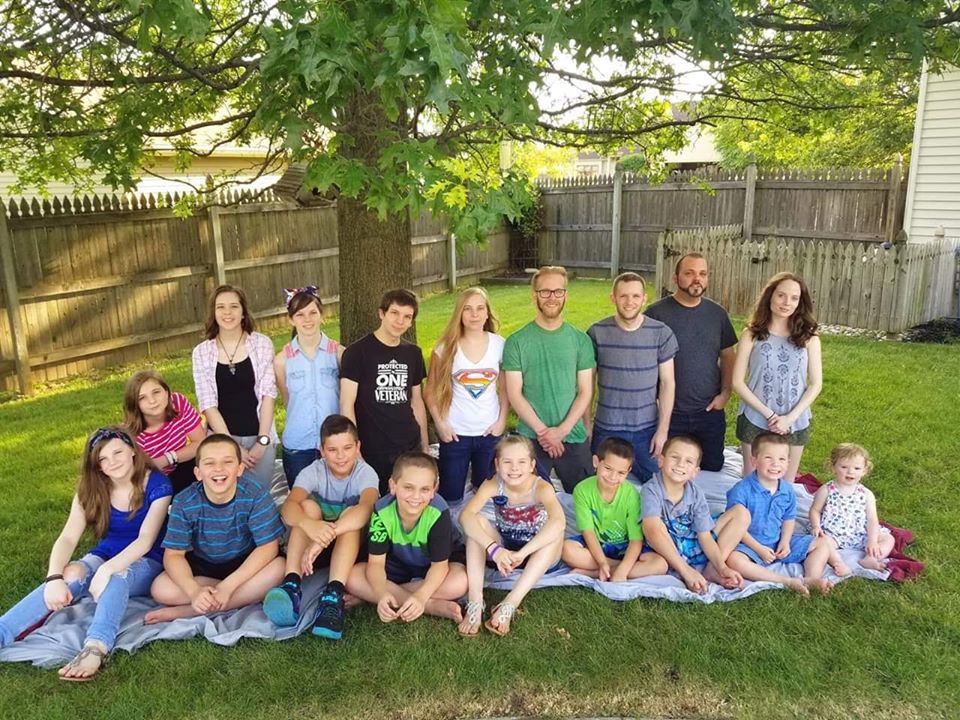 Christi Cason, 48, and husband Dave, 52, have an astonishing 18 children – and they’re hoping for more still.

The full-time mum from California said: “Twenty kids would be an amazing achievement. I can't imagine a time when I stop changing nappies.”

Conceiving hasn’t always been easy for the couple though. They suffered two miscarriages following the birth of their 16th child, and had baby number 17, Vaughn, with the help of fertility drugs. But then Christi fell pregnant again with her 18th child aged 44 after having ‘only used natural herbs’.

One baby won't cost much more, we have baby clothes and nappies already.

With ten boys and eight girls to take care of, the day starts early: Dave leaves for work at 5am and that’s when Christi starts getting the kids ready for school.

The supermum, who manages the household budget, has also become an expert at stretching her telecoms engineer husband’s £50,000 salary.

She told the Daily Mail: “We do lots of fun things together as a family, like driving into the mountains singing songs on the way, or going to the beach.

“Even though we can't afford vacations, with a big family there are always so many other things you can do to have fun.

She added: “One baby won't cost much more, we have baby clothes and nappies already.”

The Duggars: The reality stars with 19 'J' named kids

Across the pond, the Duggars are famous reality TV stars with a huge following.

Their super-sized family, headed up by Jim Bob and Michelle Duggar, is made up one ten boys and nine girls, including two sets of twins.

With an average gap of just 15 months between deliveries, you’d have thought they’d need all the help they could get to tell them apart. But Michelle and Jim Bob have chosen to give them all names beginning with the letter ‘J’: Joshua, Jana, John-David, Jill, Jessa, Jinger, Joseph, Josiah, Joy-Anna, Jedidiah, Jeremiah, Jason, James, Justin, Jackson, Johannah, Jennifer, Jordyn-Grace and Josie.

Yep, you did see ginger spelt with a J in there. 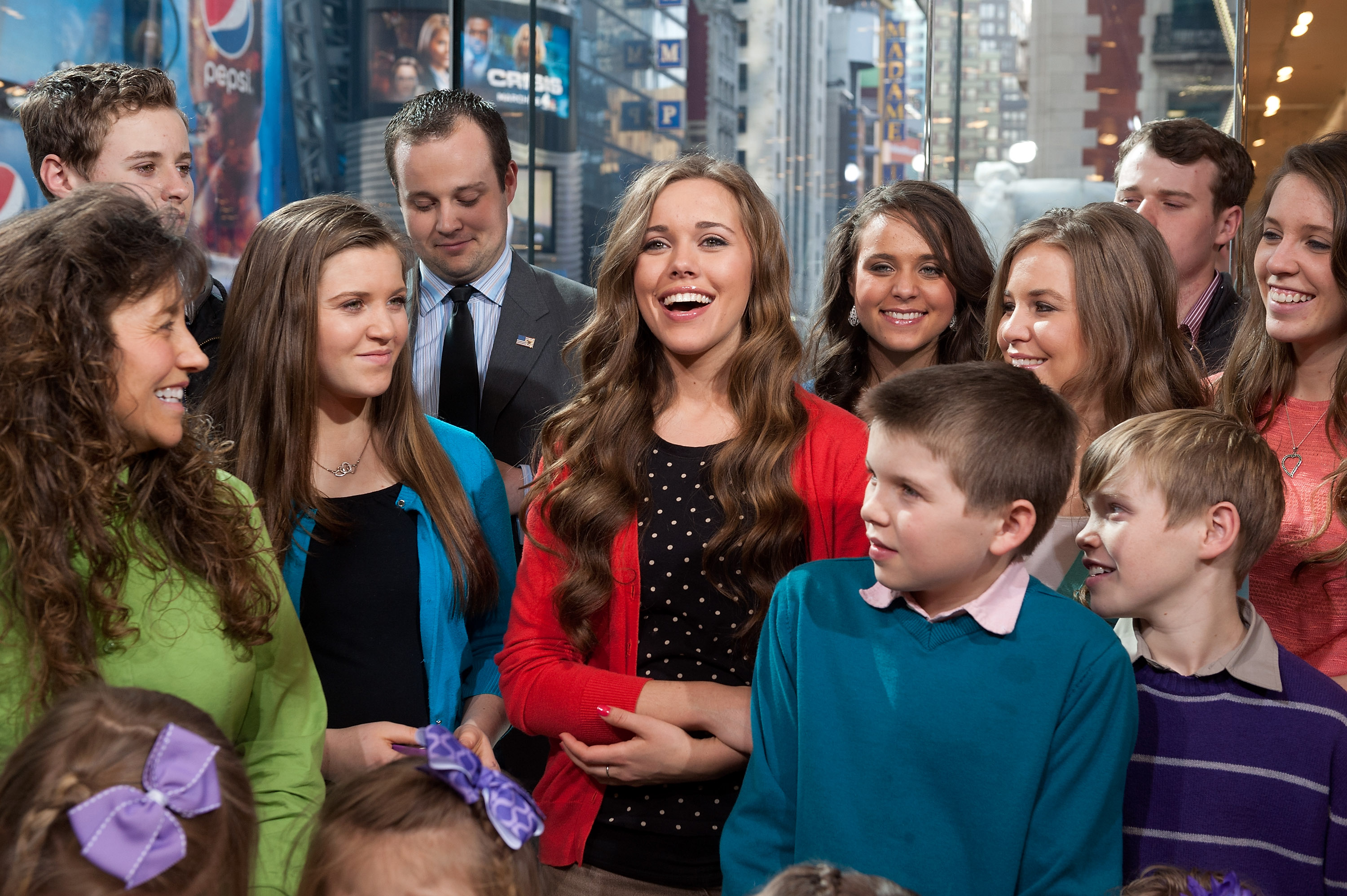 The family are devout Baptists, which means limited Internet access, no shorts or tank tops, chaperoned courtship (a form of supervised dating) and wholesome family TV only. Too much screen time is definitely not a problem in this household!

But it’s not as easy as ‘one big happy family’. Jim Bob and Michelle are currently embroiled in a feud with their 29-year-old daughter Jill, Josh Duggar was accused of molesting girls as a teen – including some of his sisters – and the family recently came under fire for holding a get-together with extended family and friends against social distancing orders.

The Bates': Mum bans TV and Internet to ensure the house with 19 kids runs smoothly 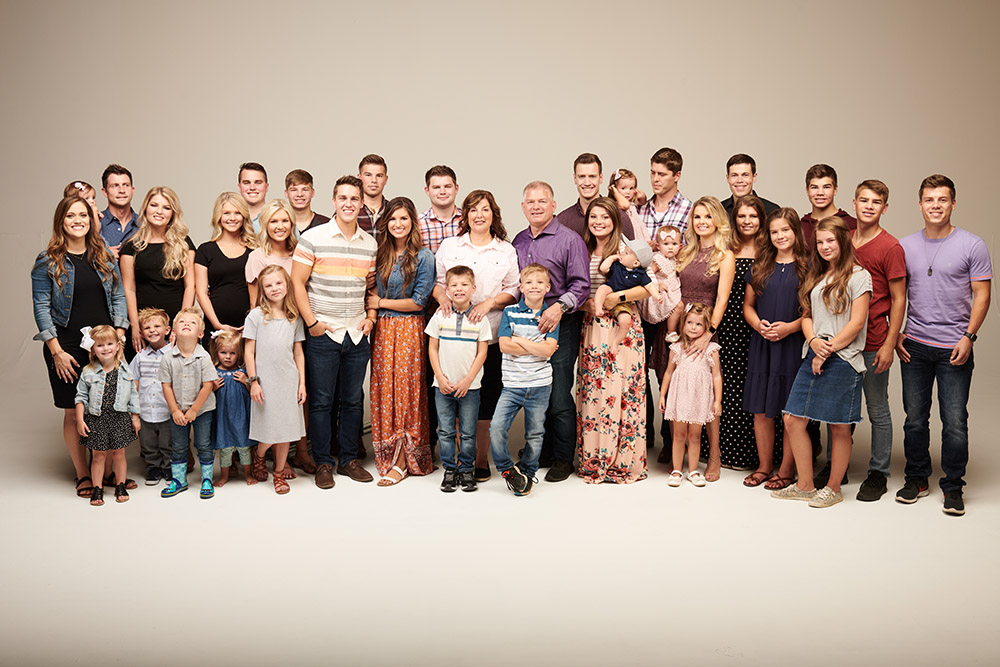 Kelly Bates gave birth to 19 children over 24 years. No C-sections. No twins. And 14 of those births were at home with no pain relief. Ouch.

The supermum and her husband Gil, a tree surgeon, welcomed their latest (and perhaps last) arrival in 2012 when Kelly was 45 years old – by which point she’d spent more of her adult life pregnant than not.

With such a gargantuan brood, everything in the Bates’ household is done on a large scale.

Their big five-bedroom home in Tennessee has five washing machines, three driers and long rails for their hundreds of items of clothing. Which, unlike most of us with our over-sized wardrobes, they actually need – a simple two-day camping trip means bringing 56 outfits!

Kelly has assigned each of the older children to a younger kid. She told ABC News: “They get themselves ready first. They help make sure that their partner has their hair brushed, shoes on, and their teeth brushed.”

The children are also responsible for making sure their room is tidy, and they’re each given a task that’s rotated monthly (unsurprisingly, no one ever wants to be in charge of laundry!).

And any parents struggling with homeschooling under lockdown should take pointers from the Bates family – they’ve done it with all ten girls and nine boys!

Kelly said: “Find out what helps you deal with frustrations. Whether it’s take a break, or go outside for a walk together, but make it a fun experience for your kids.”

In other news, Britain’s biggest family the Radfords show off their amazing garden makeover designed to keep the kids clean.

Also read about the ‘World’s strongest baby’ who can stand on her own at EIGHT WEEKS – and was holding up her head before she even left hospital.

And finally, read about the neighbour who demands mum only lets toddler out for 15mins a day as his giggling upsets the dogs in brutal note.