A GIRL who had no idea she was pregnant gave birth before going to school – and only knew she was about to become a mum when she felt the urge to push while on the toilet.

Alexis Queen, who is now 19, took to TikTok to share her incredible tale, which began when she thought she should take a pregnancy test because of her frequent heartburn, and her mum's admission that she had a lot of heartburn when she herself was pregnant. 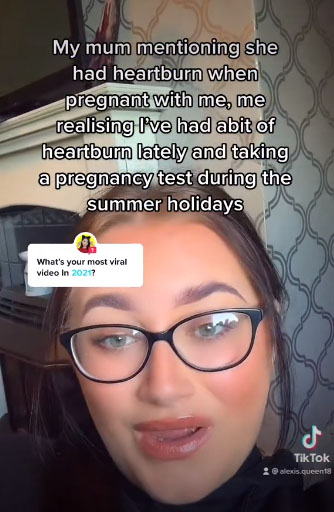 Alexis took the test during the summer holidays, when she was 15 years old, but it was negative, so she carried on with her life.

"The test being negative and me still having regular periods and no more symptoms, goes back to school for my 1st day in year 11 on the 5th September," she wrote in the video, which saw her lip-syncing to Mika's Grace Kelly.

"Having a perfectly ok day back at school. Getting ready for bed, having a bit of back pain, so taking painkillers and thinking nothing of it."

But during the night, Alexis' back pain got much more severe – with even painkillers not touching the sides.

She woke up her parents at 6am to tell them she was in a lot of pain, but "they think I’m just trying to get a day off so into my uniform I get".

"Going to the toilet before I set off to school and having the urge to push, me screaming (for) my mum and telling her I think I’m giving birth," she continued.

I get told I'm a 'fraud’ because I do my makeup so well, I don't care I love it

After going downstairs, her mum looked up her skirt to check and "went into shock when she" saw a baby's head.

Alexis' dad also tried to help, "running out the door for pregnancy tests".

The teenager had what is known as a "cryptic pregnancy" – and explained more about the phenomenon in another video on TikTok. 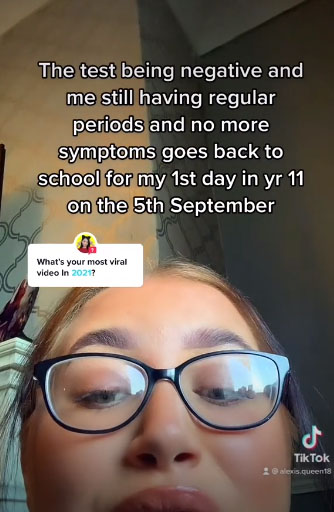 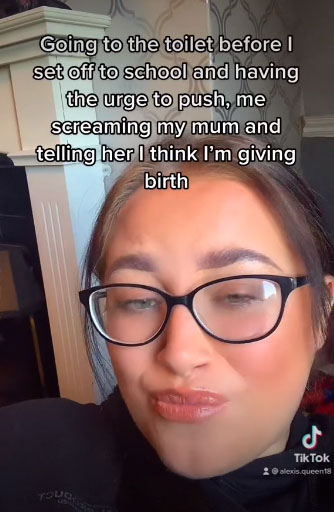 "You can go through a whole pregnancy without knowing, still bleed every month and even medical testing methods can fail to detect (the pregnancy)," she wrote in another video.

She also revealed that she gave birth "on the living room floor with no pain relief".

And, just seven weeks later, she returned to school to sit her GCSE exams, which she passed with A's and B's.

In other baby news, this mum was slammed by trolls for giving her tot a "boy's name", but she doesn't care.

This poor woman ended up in the same labour and delivery room as her ex-boyfriend and his wife… awkward!

And this mum has saved hundreds by giving her kids only secondhand gifts this Christmas.