A WOMAN who decided to have a freebirth has recalled the moment she welcomed her son into the world, then had to resuscitate him and pull out her own placenta.

A freebirth, also known as unassisted childbirth, is when a woman intentionally delivers her baby at home without a doctor or midwife in attendance. 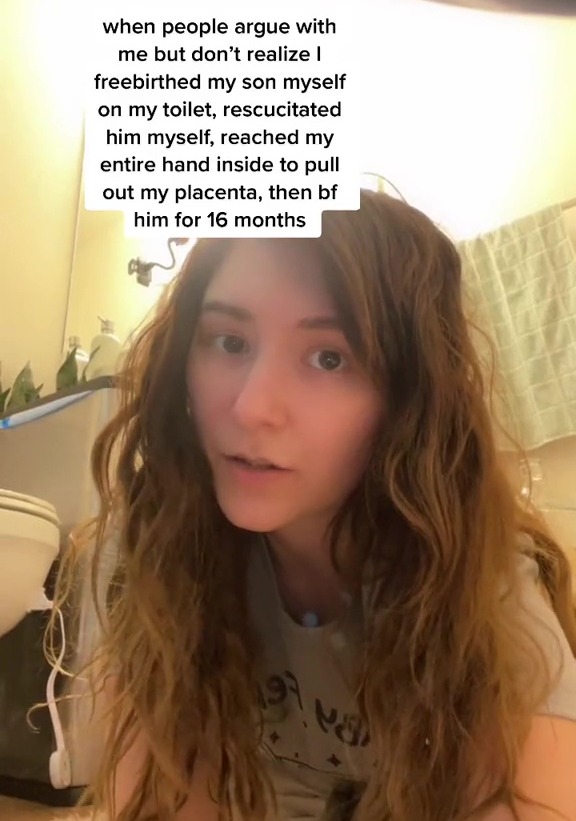 Alice Llani took to TikTok to recount her birth story, sharing a video on which she wrote: "When people argue with me but don’t realise I freebirthed my son myself on my toilet, resuscitated him myself, reached my entire hand inside to pull out my placenta, then bf (breastfed) him for 16 months."

In further videos on the social media site, Alice went in to more detail about her birth experience, explaining that while she went though a 31-hour labour in the bathtub, she actually delivered on the toilet.

"If you manage to push a baby out laying down without breaking your tailbone/tearing food for you but I’m not going to risk it," she said.

She also explained why her son, called Fern, needed some help breathing when he first came out.

"Things moved really fast when I was pushing baby Fern out," she said.

"The labour dragged on for 31 hours but the pushing was fast… I’d been watching free births non-stop so when he came out my focus wasn’t, ‘Ah, I have a baby’, it was checking up on him, because I was the ‘doctor’.

"So I was looking for his colour and his colour was so good, but he didn’t breathe immediately."

While Alice and her husband gave Fern a minute, he then "tried to breathe", so she used a suction bulb to help clear the "gunk" on his chest.

Following the birth, Alice had the task of trying to deliver her placenta, which stubbornly refused to come out.

"I was getting tired," she said. "I did sleep a lot during my labour but I was still really sleepy. I was afraid I was going to fall asleep with my placenta still inside.

"I tried all the natural things to get the placenta out… And it was just really stressful to try to do that with the baby attached to me because the cord wasn’t very long."

So Alice decided to cut the umbilical cord, cutting it closest to her hand so that Fern had the majority of the cord. 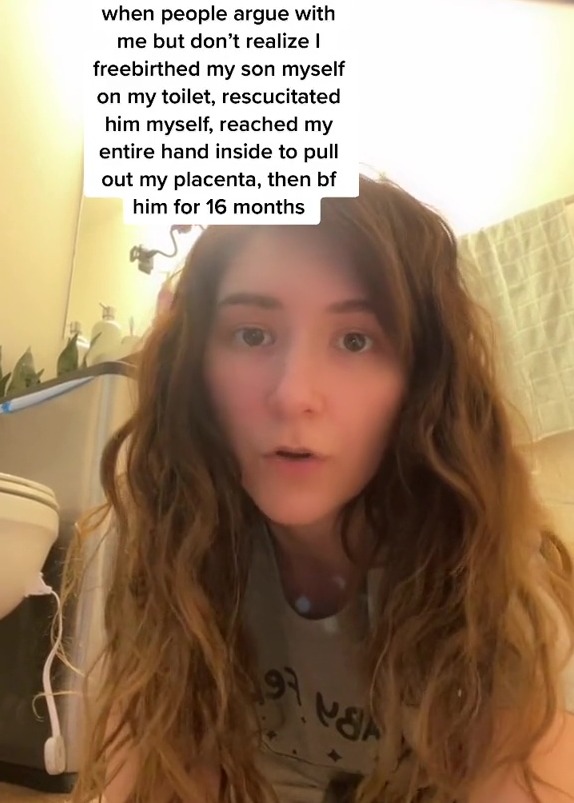 After that, she put him in his bassinet next to his father, and went back into the bathroom to try to deliver the placenta.

"So then I was like, I need to figure out where my placenta is – did it pass through the cervix or is it still up?

"So I stuck my whole hand up there and it was really close, so I just made sure I got my hand all the way to the top and got it out. That hurt, but pushing my baby out did not."

Alice also likened the freebirth to a "31-hour meditation" and, as she's currently expecting her second child, said she wants a similar experience this time around.

In other parenting news, this single mum wants to work but admits childcare costs are "crippling" her.

This mum has three children who all share the same birthday.