A FAMILY-OF-NINE have taken to TikTok to share their unique life as they live full-time in a converted bus.

Known on TikTok as ‘jdandbritney’, parents Britney, 34, and JD, 37, have seven children and are currently on what they describe as an ‘American Family Road Trip’. 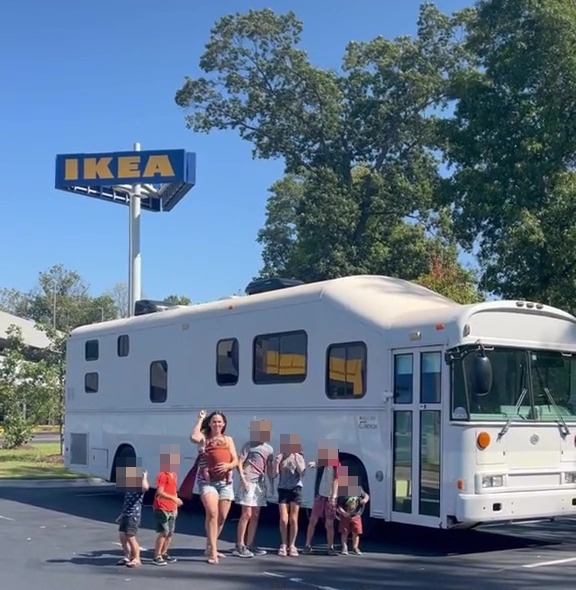 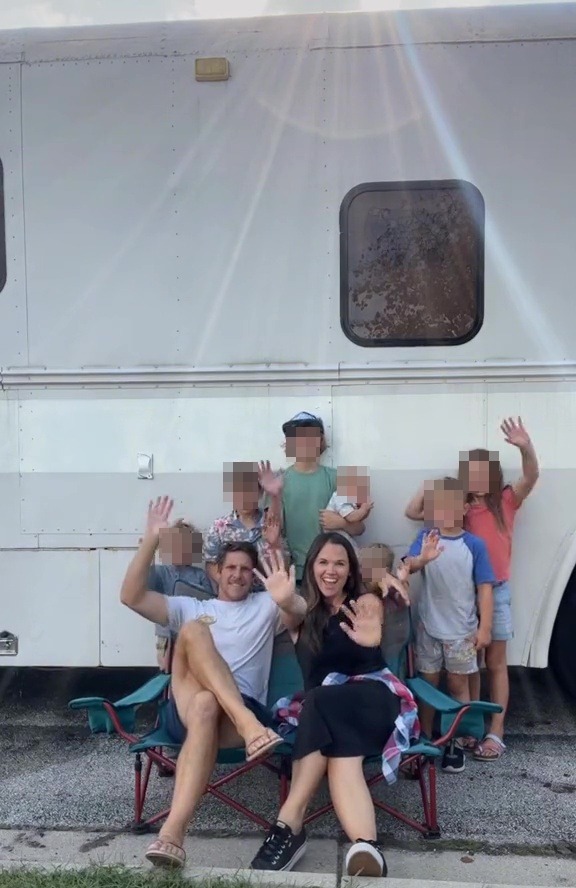 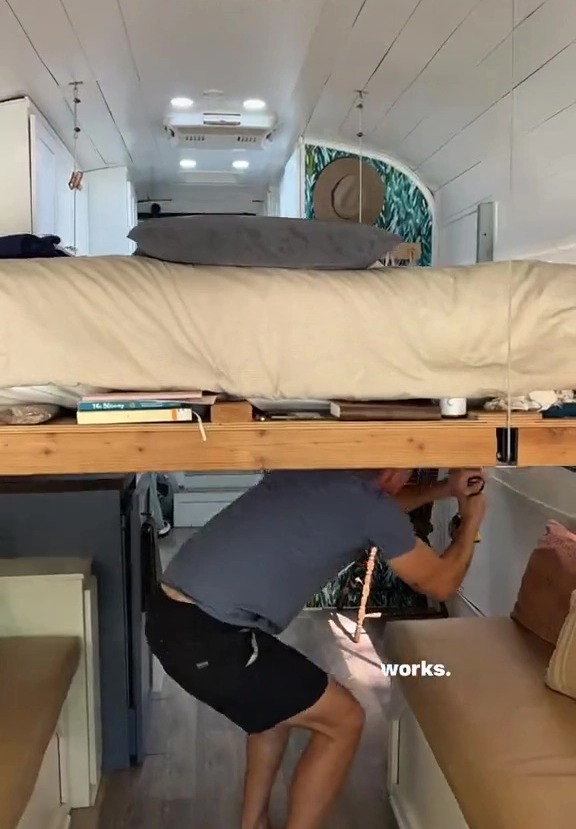 The family live in a converted bus and have been exploring around America for nearly four years.

The family is “having a blast, cherishing family, exploring and growing along the way”.

Britney and JD are parents to Funner, 11, Kinsey, nine, Schofield, seven, Audie, five, Swift, four, Uriah, two, Quil, four months, and have shown off the inside of their home on TikTok. 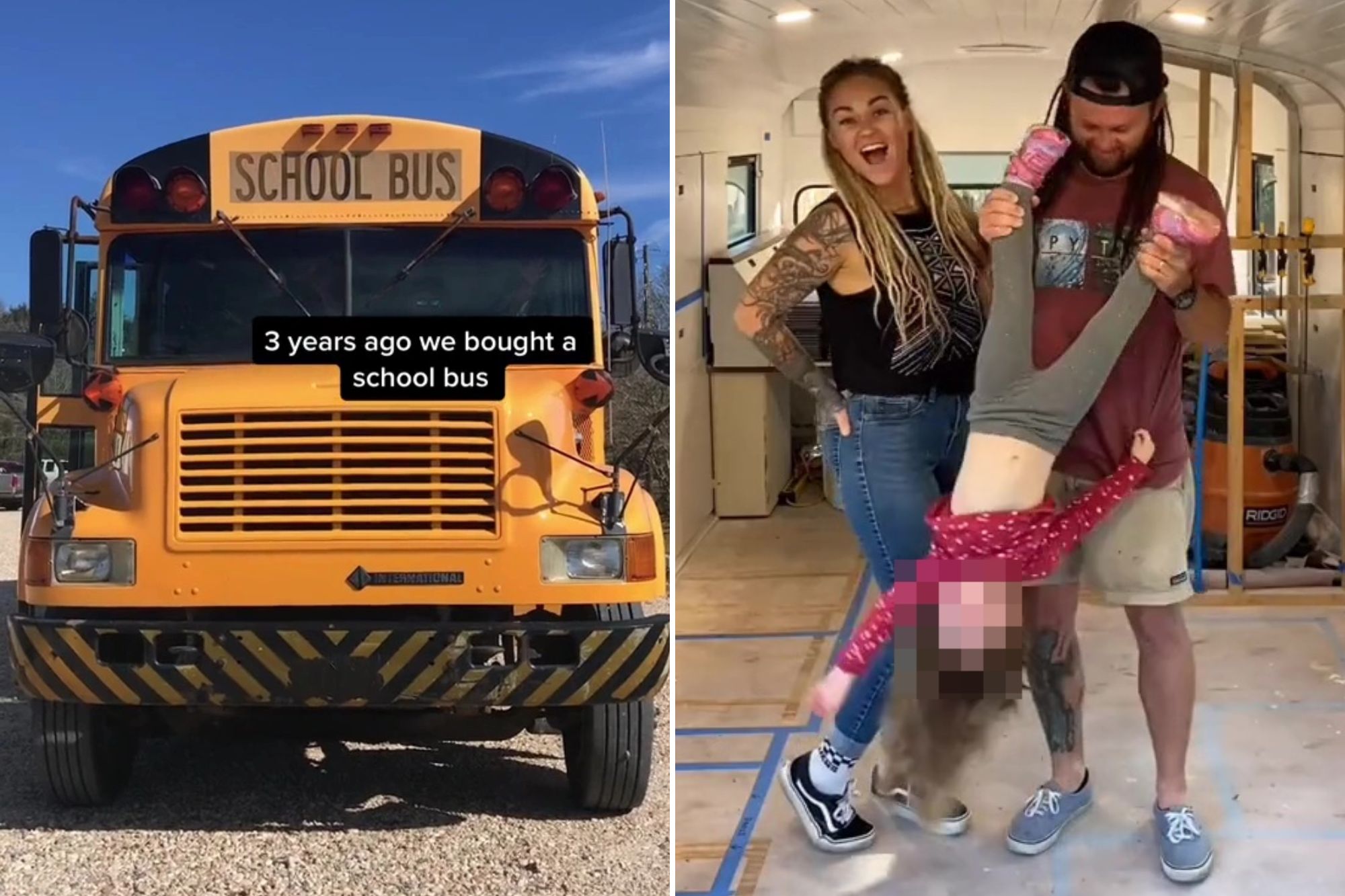 In a bus tour video, Britney said: “When you walk into our living room space, we have two long couches with six seat belts attached.

“These slide out on both sides and make a big space for movie nights.

“We have tons of storage and power outlets for our electronics.

“Also our bed drops from the ceiling, stay tuned for part two”.

In another video, Britney explained more about her unique bed.

She continued: “While we were thinking about building the bus we realised a space dedicated to the master bedroom would be a waste for our lifestyle.

“JD and I tend to be early to rise and our goal was to make everything as functional as possible without sacrificing anything.

“When designing the bus we knew we didn’t need a master bedroom to lounge around in, but the kids sure love to hangout in theirs.

“The two U-shaped bunks were originally planned to be built into private spaces similar to tour buses, but the kids prefer them open for now.

“When they were little, bedtime was easily set for the same time for everyone.

“As the've gotten older Gunner and Kinsey have Paperwhite Kindles with the unlimited plan allowing them the opportunity to stay up and read later than their siblings.

“We also rotate through the top 4 oldest for staying up late with Mom and Dad ‘past bedtime’.

“With our unconventional lifestyle, weeks straight of hiking National Parks, new museums & cities, and our larger crew thankfully falling asleep isn’t really a problem we have.

“Similarly the open kitchen area provides room for starting coffee in the morning, or the occasional late night pregnancy craving.

“One last thing… I really appreciate having the bathroom space separating our “master” from the bunkhouse.

“It gives more of a privacy space to sleeping even in this smaller square footage”.

In the video, Britney demonstrated how her pull-down bed works.

She said: “Check out how my bed works”, as her partner JD reached up to the ceiling, pulling down their bed.

With the flexibility of this bed, the couple have more space in their bus, as she explained: “Bonus in the bus with the bed down, I have living room space still, tons of bed space and this guy is still able to cook dinner – not bad”.

TikTok users were left very impressed with the bus and thought the family’s bus home was beautiful.

One person said: “Beautiful home and a great way to raise your kids”.

Another added: “You made a plan and worked it out. Good for you guys!! Enjoy”.