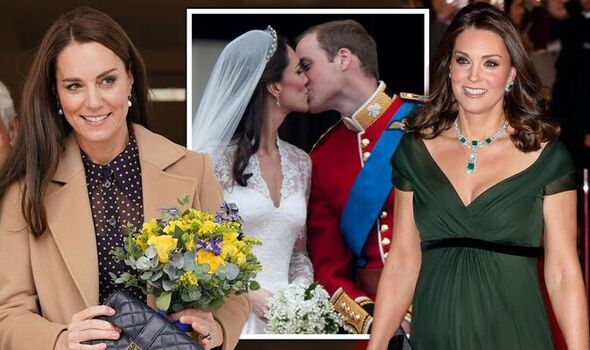 A lot of thought goes into the wardrobes of the Royal Family. Clothing, jewellery, shoes and other accessories must be suitable for undertaking royal duties, and must be in keeping with royal protocol. However, sometimes the royals will give a nod to a specific person, place or idea. Personal Stylist and Image Coach Melissa Lund revealed which times Kate Middleton’s dresses went deeper than design.

Melissa exclusively told Express.co.uk that first and foremost, Kate dresses “to express her personal style and to be appropriate for the engagements she is undertaking”.

However, according to the expert, it is “interesting to look at some of the symbolism that might lie behind her style choices”. “Might” is an important word here, “because sometimes it’s a stretch to think that there is any”.

Melissa suggested that when Kate does dare to dress symbolically, it is nuanced and small rather than super outlandish. This is because of her position in society.

The expert explained: “Kate Middleton always tries to be diplomatic and the Royal Family aren’t permitted to be overtly political so some of the symbolism might be fairly subtle but Kate definitely likes to give a nod to the organisation or country she’s visiting with her outfits.”

This means that Kate is a fan of “literal dressing” when the destination or occasion permits it. Melissa shared with Express.co.uk Kate’s “outfits with obvious symbolism”.

Melissa explained that Kate’s tulle sleeves embroidered with flowers were much more than just a pretty pattern. Rather, it symbolises the “union” of the four countries within the United Kingdom.

She said that “tulle sleeves embroidered with roses, daffodils, thistles and shamrocks represent the four countries of the United Kingdom”.

A few years later, in 2018, Melissa suggested that Kate made another subtle statement when she wore a dark green dress to the BAFTA award. This was an occasion many attendees wore black in support of Time’s Up, a non-profit that raises money to support victims of sexual harassment.

Melissa explained: “The Royal Family have to be apolitical so with MeToo at full power and all celebs wearing black that year, Kate chose a dark green gown with a black belt. Green was the colour associated with the suffragettes and the black belt [might have been] a nod to the MeToo movement.”

Earlier this month, the Princess visited the Ukrainian Community Centre in Reading. She wore a mid-length navy blue dress with yellow polkadots from L.K.Bennett.

Melissa claimed that again, this was a subtle sign of support for those affected by the ongoing crisis in Ukraine. Despite the Ukraine flag being a brighter blue, the expert said this was “close enough”.

And it’s not just Kate’s clothing that likes to make a statement, according to the expert, but her jewellery too.

During a trip to Ireland for St Patrick’s Day this year, Melissa suggested that Kate paid homage to the country with her choice of accessories.

She commented: “During a visit to the 1st Battalion Irish Guards St Patrick’s day parade at Mons barracks, Kate gave a nod to the Emerald Isle, wearing a green, military style coat with epaulettes.

“She also wore a special gold shamrock brooch. This brooch belongs to the Irish Guards and is loaned to female members of the royal family who are associated with the regiment. Princess Anne and the Queen Mother have also worn this brooch so it’s a lovely continuation of an age old tradition.”

Melissa Lund concluded: “Sometimes it’s a bit of a stretch to read any obvious symbolism into Kate’s outfits – sometimes the items she wears are just romantic (gold necklace with her children’s initials, for example). I think overall she wants to give an impression of support for a country or cause and certainly doesn’t want to cause offence.

“She’s in the public eye (now more than ever) so she also needs to be stylish and dress appropriately as well as perhaps making any symbolic statement she feels is relevant (or allowed).”

In True Kylie Fashion, Kylie Jenner Wore a Bodysuit and Booties For a Zoom Meeting