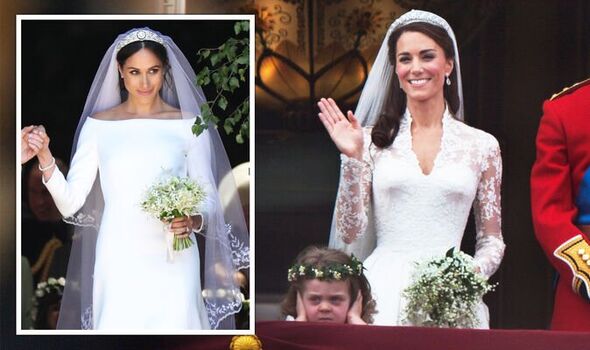 Kate wore a lace-covered ivory gown, emphasising her tiny waist with a corseted bodice. The dress, designed by British fashion house Alexander McQueen with lace made in Nottingham, took inspiration from classic Victorian styles. Meghan, on the other hand, wore a dress designed by French fashion house Givenchy. Meghan’s dress was a bright, pure white. It featured a looser fit and, controversially, its bateau necklace revealed part of Meghan’s shoulders.

Traditionally shoulders and knees are covered in church, although many brides break this rule on their wedding day.

Harriet Castle, a buyer at Public Desire, spoke to Express.co.uk about both the royal wedding dresses.

She told readers: “Both of their wedding dresses were stunning and really reflected both of their styles and positions in the family perfectly.”

The two women were marrying into two different positions in a family in which members ranked based on their order in line to the throne.

As Kate was marrying the second-in-line to the throne, the enormous state occasion was full of the expected pomp.

She and William were married in Westminster Abbey, which is highly significant to the Royal Family. It’s been the site of coronations since 1100 and many significant royal weddings and memorials have taken place here.

Meghan and Harry married at the smaller St George’s Chapel on the Windsor Castle estate.

Besides the rank and profile of the brides, there were other significant points too, according to Harriet Castle.

She said: “The neckline is one major differing point.

“Kate went for a v-neck, which kick-started a trend among brides at the time.

“Her look overall was cleaner, whereas Meghan took more risks.

“Meghan’s boat neck design was seen as a bit more risque for a royal wedding but it suited her perfectly.”

Meghan, who previously starred in US cable show Suits, also wore a second dress as she stepped out before the public post-wedding to head to her reception.

This dress, by British designer and daughter of rock icon Paul McCartney, Stella McCartney, featured totally exposed shoulders and a low back.

Kate, too, wore a second dress, also by McQueen, although pictures from their private reception came to light later.

The second dress features a full skirt, a nipped-in waist with a sliver glittering belt, and a sweetheart necklace.

She covered her shoulders with a white angora cardigan. Both dresses have inspired millions of women.

Which was the most popular royal wedding dress of the two?

According to research looking at global monthly Google searches for wedding dresses from fifteen of the most popular royal weddings since King George VI and Elizabeth Bowes-Lyon, Meghan came out on top.

Meghan’s wedding dress is officially the most searched for a wedding dress with more Google searches than any other royal bride in the world.

The Queen ranks fifth with 7,700 monthly average searches for her wedding dress, despite the wedding taking place 74 years ago.

“She does push her style a tad more than Kate though – this is in line with her personality.”

Pharrell's New Adidas Slides Look Like Perforated Socks, and My Feet Are Happy