TIPPING the scales at a staggering 28 stone, Kay H decided something in her life desperately needed to change.

The teacher, 39, had become "hopeless, depressed, stressed and scattered" after piling on the pounds following years of struggling with various eating disorders. 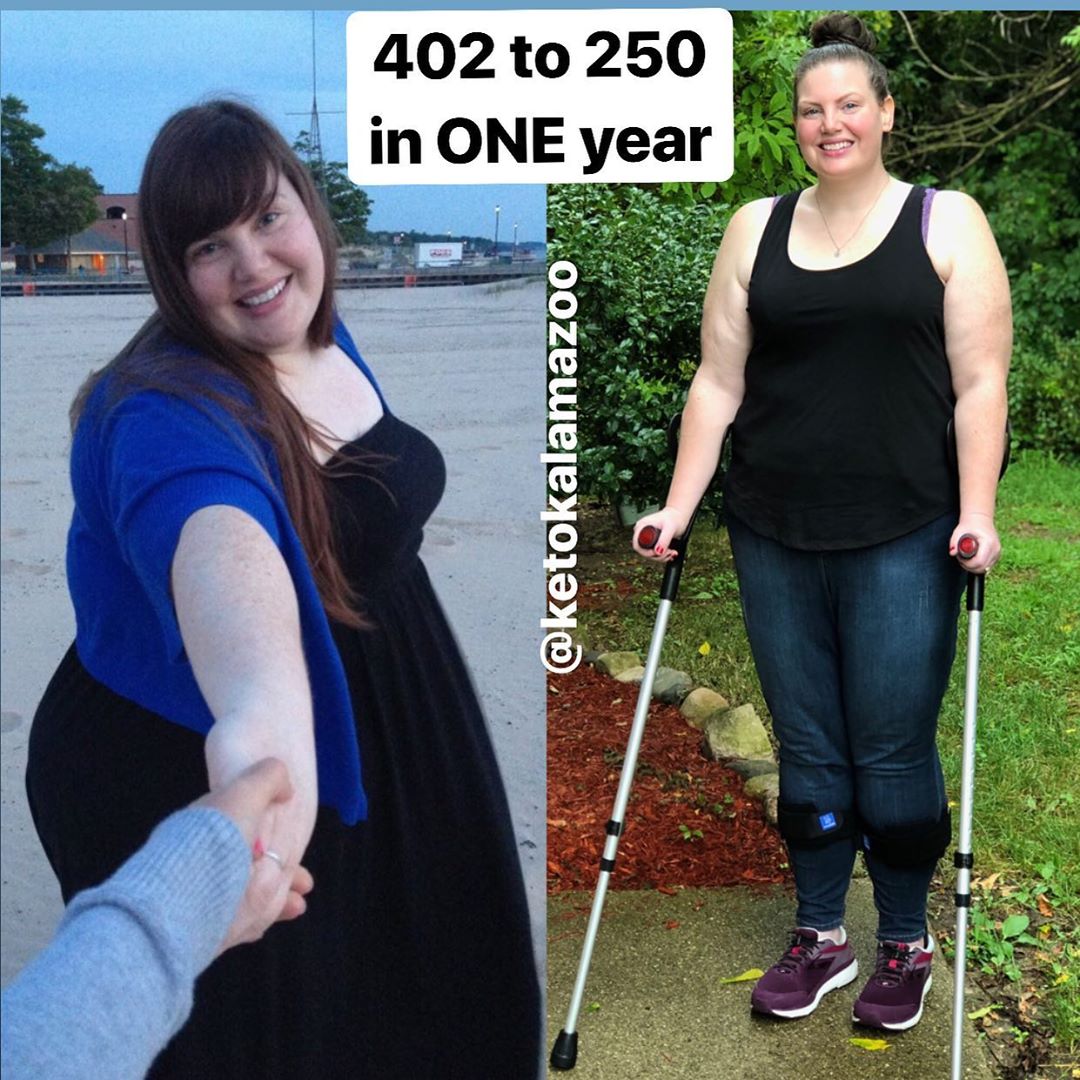 And a string of illnesses including an autoimmune disease and chronic pain meant she'd piled on eight stone in just one year.

However, Kay, from Kalamazoo in Michigan, finally decided "enough was enough" when she stepped on the scales one day to discover just how heavy she was.

Determined to do something about her size, Kay decided to try the keto diet after joining a ketogenic support group on Facebook.

She has since shed an incredible 11 stone while doing the popular diet and intermittent fasting – without setting foot in a gym. 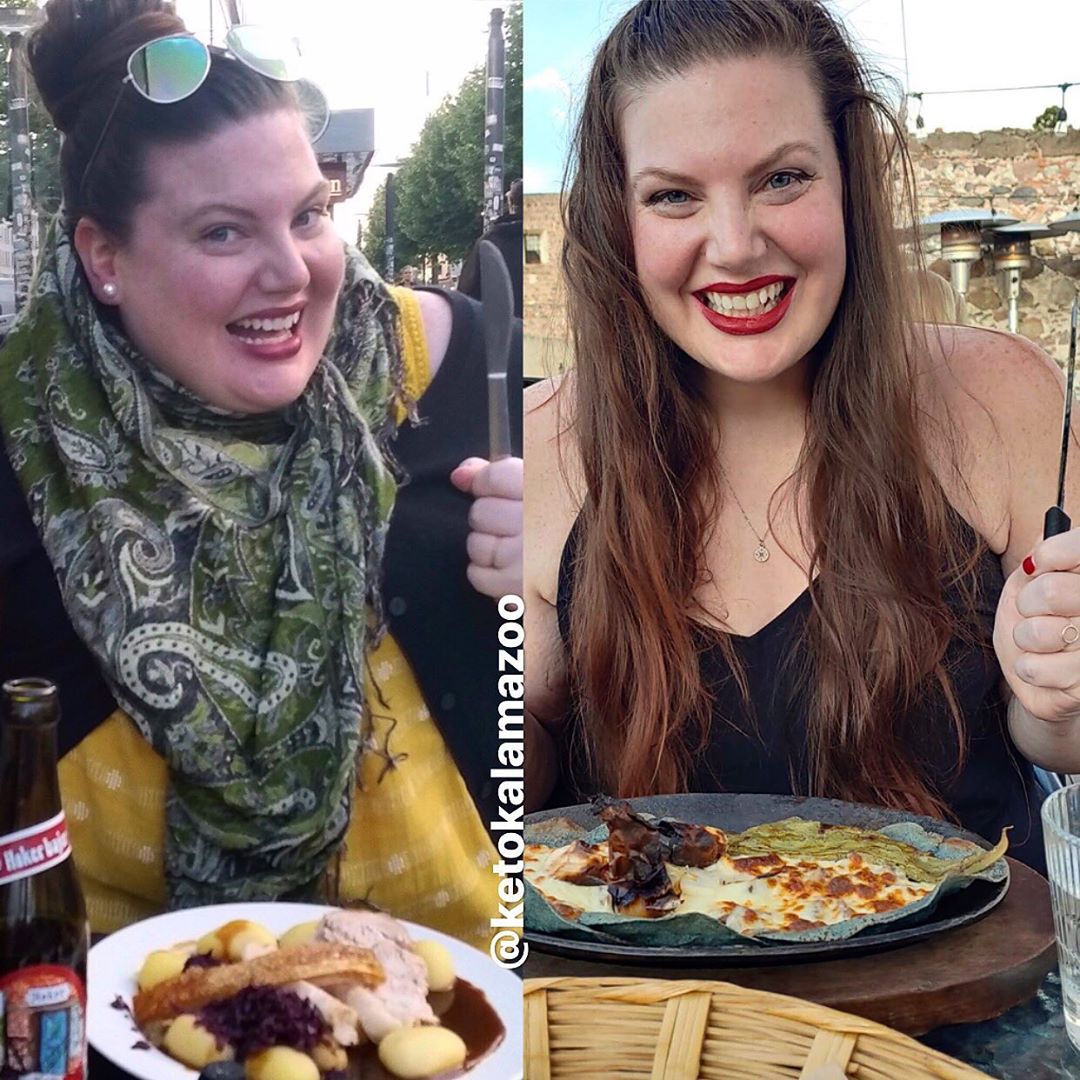 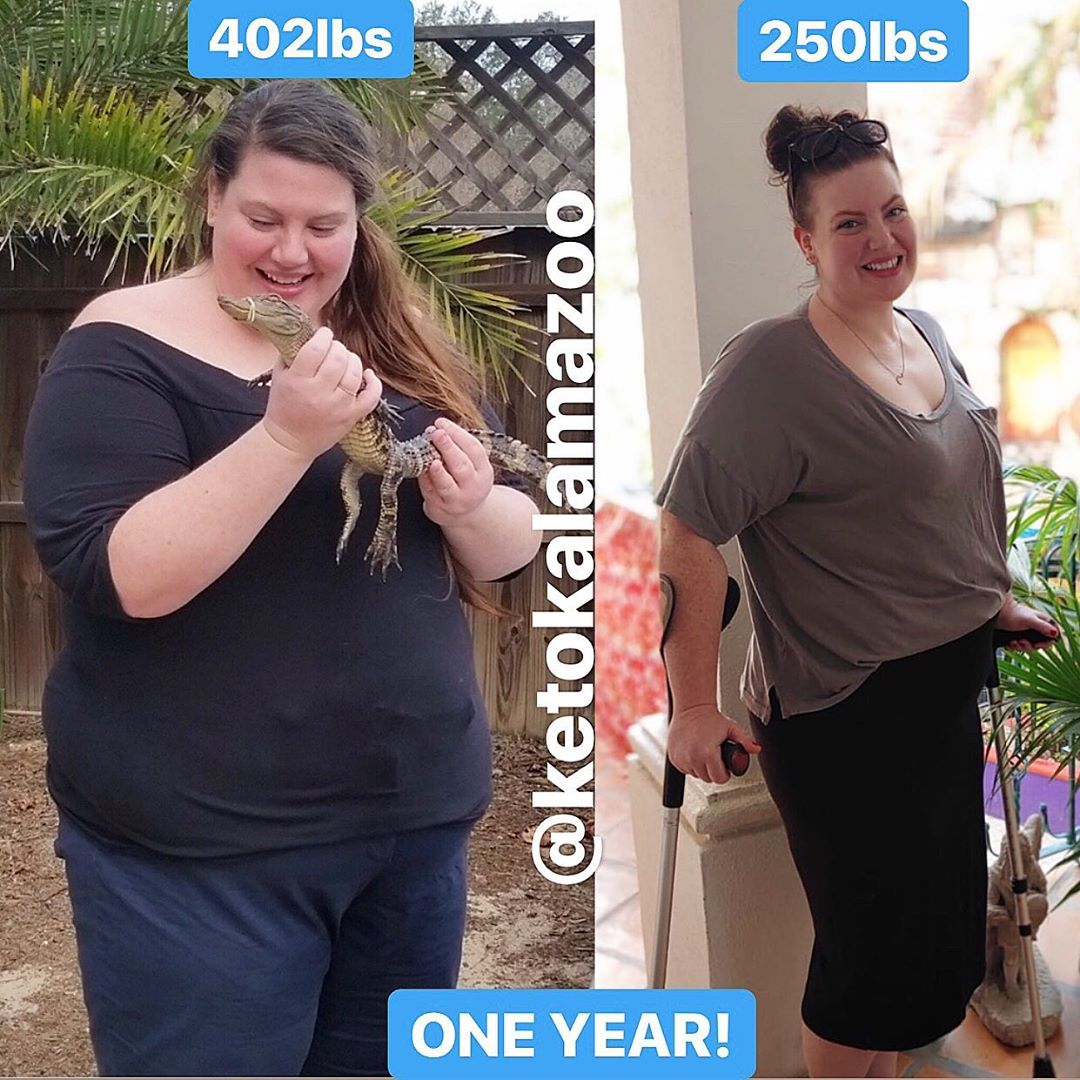 Kay now feels happier than ever in her smaller 17 stone figure – and is now even free of her chronic pain.

She said: "Today, I can confidently say that I'm never giving up on myself again.

"My newfound quality of life is too important to me. I am free of chronic pain and living a life dependent on medication.

"There are other benefits, too, like not having to worry if I'll fit in a seat. I've found so much freedom, health, and happiness."

Kay first realised something was wrong when she realised she'd gained eight stone in one year, and was beginning to lose her hair.

What is the keto diet?

The keto diet involves eating lots of "good" fat, to curb hunger pangs, while cutting out carbs and eating moderate amounts of protein.

It's said to boost energy levels and help speed up weight loss.

The diet relies on a normal metabolic process called ketosis – that helps the body keep working.

It's where the body, starved of carbs for energy, starts to burn fat reserves instead.

For healthy people, who don't have diabetes and aren't pregnant, ketosis usually kicks in after three or four days of following the plan and eating less than 50g of carbs a day.

So if you're cutting out all those carbs, what can you eat?

Fat is the answer! It should make up about 60 to 80 per cent of total daily calories, while protein makes up 10 to 15 per cent and carbs are less than 10 per cent.

And it's not just a calorie free-for-all. Keto enthusiasts should cap their daily intake at 1,800 calories a day. 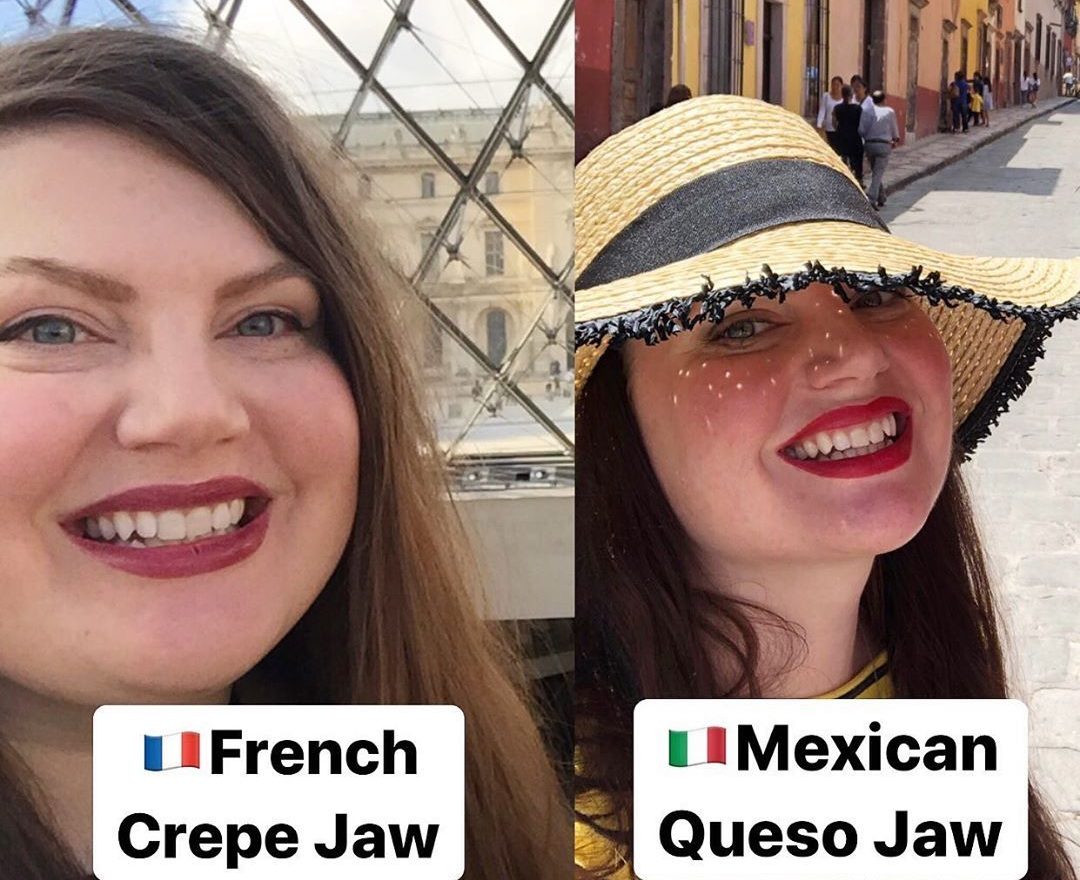 She said: "I had slews of appointments with my general practitioner and an endocrinologist.

"Both doctor did copious blood work trying to figure out how and why I was gaining so much weight.

"I felt utterly hopeless, depressed, stressed and scattered, all while trying to finish up my research and a doctorate degree.

I felt utterly hopeless, depressed, stressed and scattered, all while trying to finish up my research and a doctorate degree

"Between my autoimmune disease, stress, and depression, my hair was falling out in clumps and I stopped caring about many things in my life.

"I hid from my friends because I was constantly worried about being judged. I stayed in the house to avoid anyone who would see how bad my weight gain had gotten." 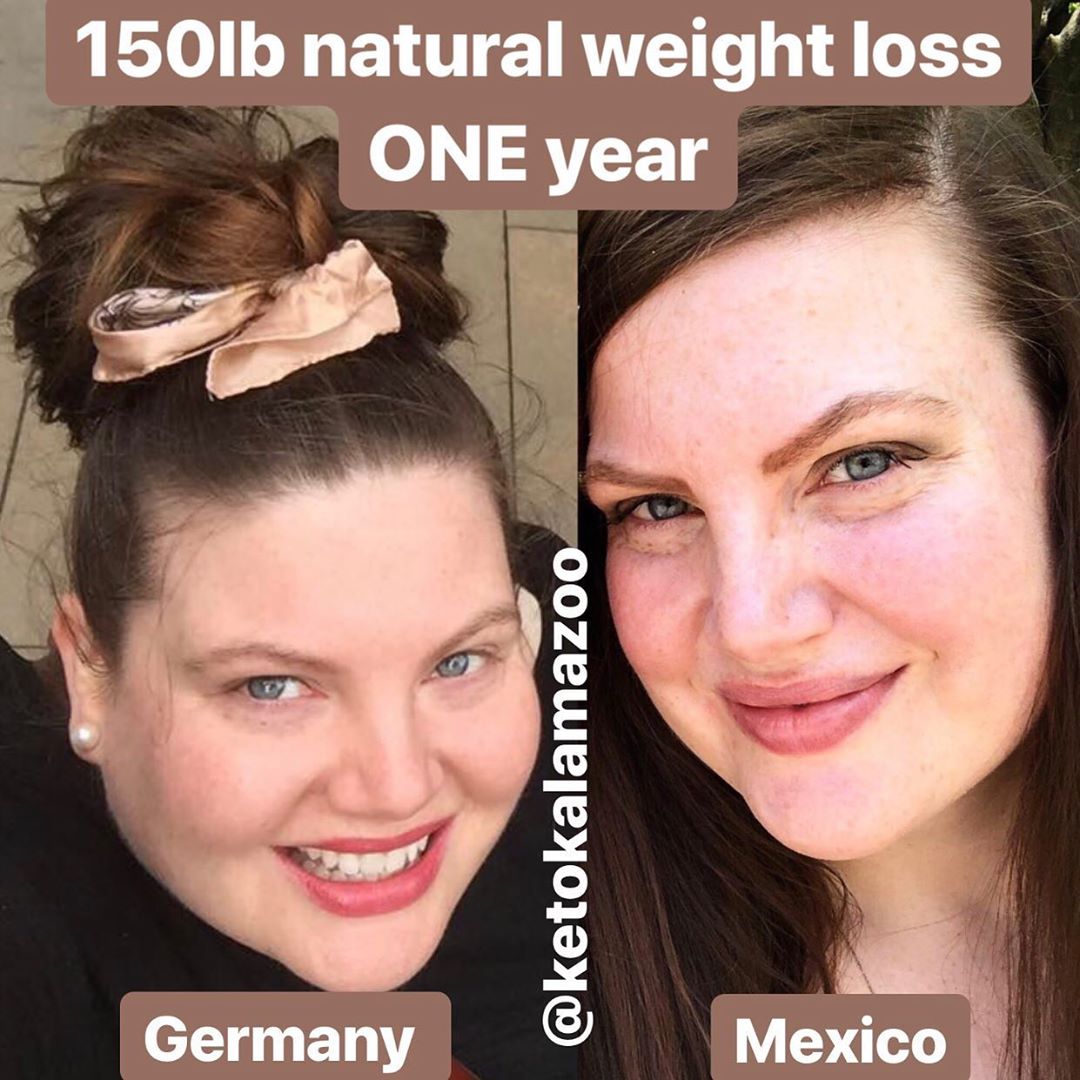 After reaching a huge 18 stone, Kay decided to join a ketogenic support group to find "structure and support".

And even after the group shut down and she contracted a virus, Kay continued with her keto diet.

She told Women's Health US: "The group I joined only stayed active for three months, but I was determined to keep plugging away even after it concluded—and I did.

"Unfortunately, I also encountered a bump in the road that July when I contracted a virus that destroyed nerves in my body. But I refused to let it ruin my progress.

"Between having to learn how to walk again (I could barely make it to the bathroom—so I did zero exercise), and multiple hospital stays, I still managed to maintain a low-carb diet.

"One year later, I'd lost a total of 150 pounds, no exercise involved." 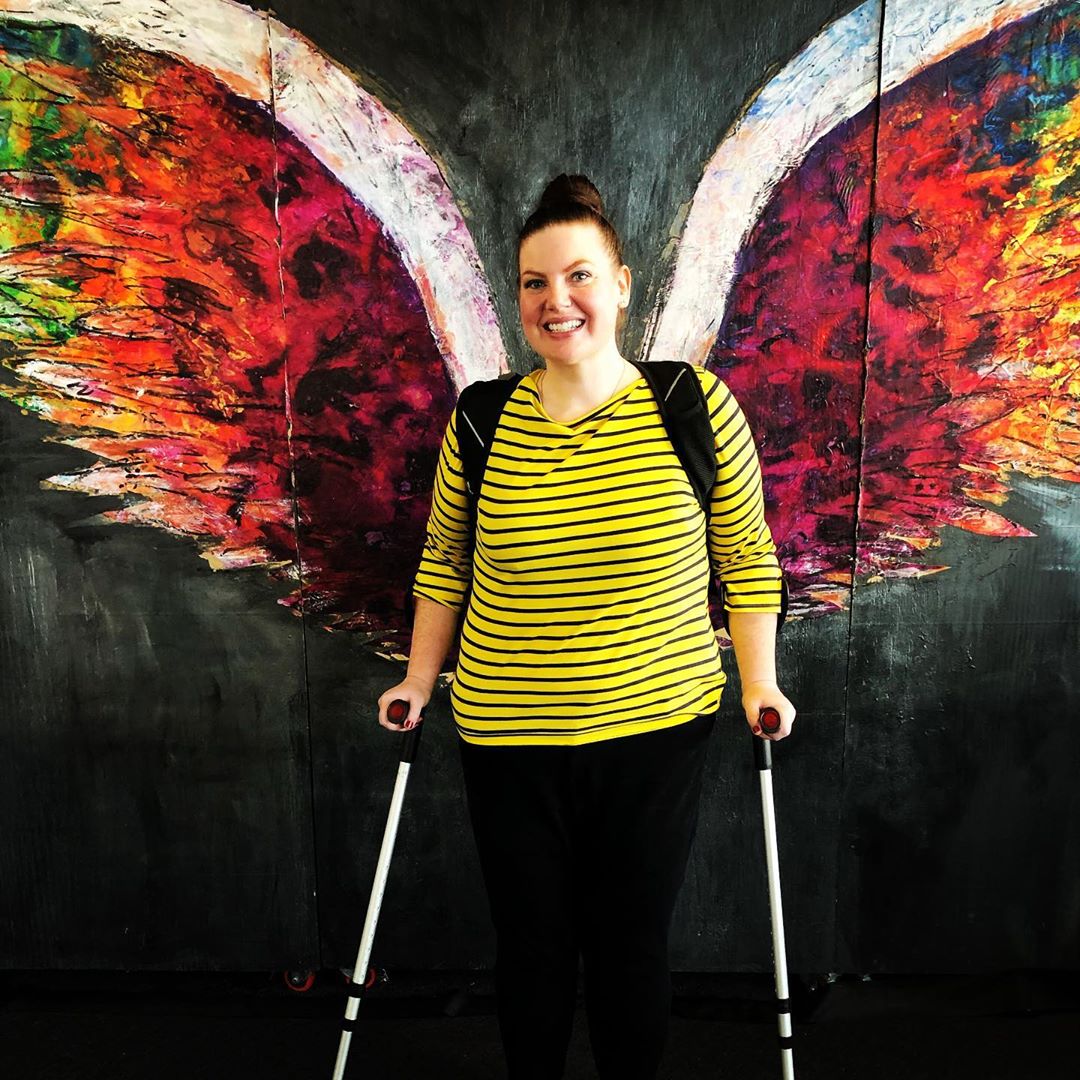 Breakfast: I skip it.

Snack/dinner: A cup of coffee made with one serving NeuRoast Instant Americano coffee and one serving of Lion’s Mane extract and/or a keto bar.

Dessert: I'll usually have a Complete Wellness shake, which is like a keto meal replacement drink, with two scoops of unflavored collagen and a scoop of unflavored MCT oil powder.

As well as going keto, which involves swapping out carbs for fats and proteins, Kay also practices intermittent fasting.

She eats within a six-hour window daily – typically eating one large meal and then one smaller meal or snack per day.

She added: "I don't restrict myself in an unhealthy way. If I'm hungry, I eat.

I don't restrict myself in an unhealthy way. If I'm hungry, I eat

"I do not track macros (carbs, proteins, or fat) or calories daily.

"I tracked in the beginning to get a feel on how many carbs and calories are in the foods I eat, but nowadays I simply try to have as few carbs as possible and eat intuitively."

11 months and 130lbs gone; 100 more to go! I used to hide behind scarves, purses, people, pillows -whatever was available. Not anymore! I still have quite a bit to lose, and am plateauing hard -but this girl is NOT stopping. The girl on the left could pound pavement -she didn’t let her weight stop her and could walk anywhere from 7-12 miles a day despite autoimmune flare-ups and inflammatory pain. The girl on the right eats WAY more and is learning how to walk again (see past posts for story), so she doesn’t get much exercise at all. Moral of the story? Eat less; move more obviously did not work for me. Removing carbs was key -and despite a huge decrease in physical activity and an increase in cortisol/stress (inhibits weight loss) from illness, I still lost 130lbs in 11mos JUST by letting go of carbs. Also, my autoimmune flare-ups are basically gone and I’m off myRA prescription. *clicks heels* So many wins! . . . . #tuesdaytransformation #weightlosstransformations #lowcarbtransformation #ketogenictransformation #ketotransformations #ketosistransformation #autoimmunediet #autoimmunewarrior #rheumatoidarthritiswarrior #nervedamage #nervedamagesucks #thenandnowpics #beforeandafterweightloss #weightlossbeforeandafter #transformations #myketojourney #weightlossmotivator #invisibleillnesswarrior #ketocommunity #ketocommitted #fatfeuled #afo #nosugardiet #sidebyside #facetoface #beforeandafters #crutches #handicap #healingjourney #afos

Kay has also managed to keep the weight off without setting foot in a gym.

She said: "The 150 pounds I lost in a year I achieved without ever stepping foot in a gym—it was entirely nutrition-related.

"Now that I'm able to walk again without a slew of orthotic braces and crutches, I'm so eager to return to running.

"Working out isn't necessary to be successful on the keto diet.

"However, aerobic activity and weight lifting are both so great for many other reasons, like cardiovascular health, building muscle, and maintaining a strong core throughout life."

Kay is now eager to encourage other people to follow in her footsteps and try keto to lose weight.

She added: "If you have a lot of weight to lose, don't be discouraged.

"I was there once, too. You have one shot at this life—so think about what you want out of it.

"No more 'I'll start Monday' or 'I'll start after the holidays' or 'I ate this bad thing, I'll take the rest of the day off.' Instead, keep pushing on.

"Also, it's totally okay to find motivation in places other than the gym.

"I asked friends for advice about keto, read diet books that were based in science and interested me, and more.

"But ultimately, the best piece of advice I can give you is to find support.

"Weight loss is difficult for a variety of factors.

"For me, my Facebook support group was key to keep me accountable and motivated. For you, it might be something else."