I am crouched in a doorway on 42nd Street with two tax accountants. It’s raining on the parade of celebs streaming out of the Moschino show, and as Megan Fox and Taraji P. Henson climb into their respective town cars, Jill Franco and Lauren Lovelace—both CPAs—are shielding their Bottega Veneta heels from the sudden downpour.

“We are not influencers,” Franco insists, although she’s wearing a head-to-toe look of runway pieces that can be procured only from a semisecret Italian showroom. “We are just fashion fans who actually buy the clothes we see on the runways. … And this season, I mean, it feels like I’ve been hiding inside for a year!” she laughs. “So I wanted to show off a little bit. I’m done with blending in.” 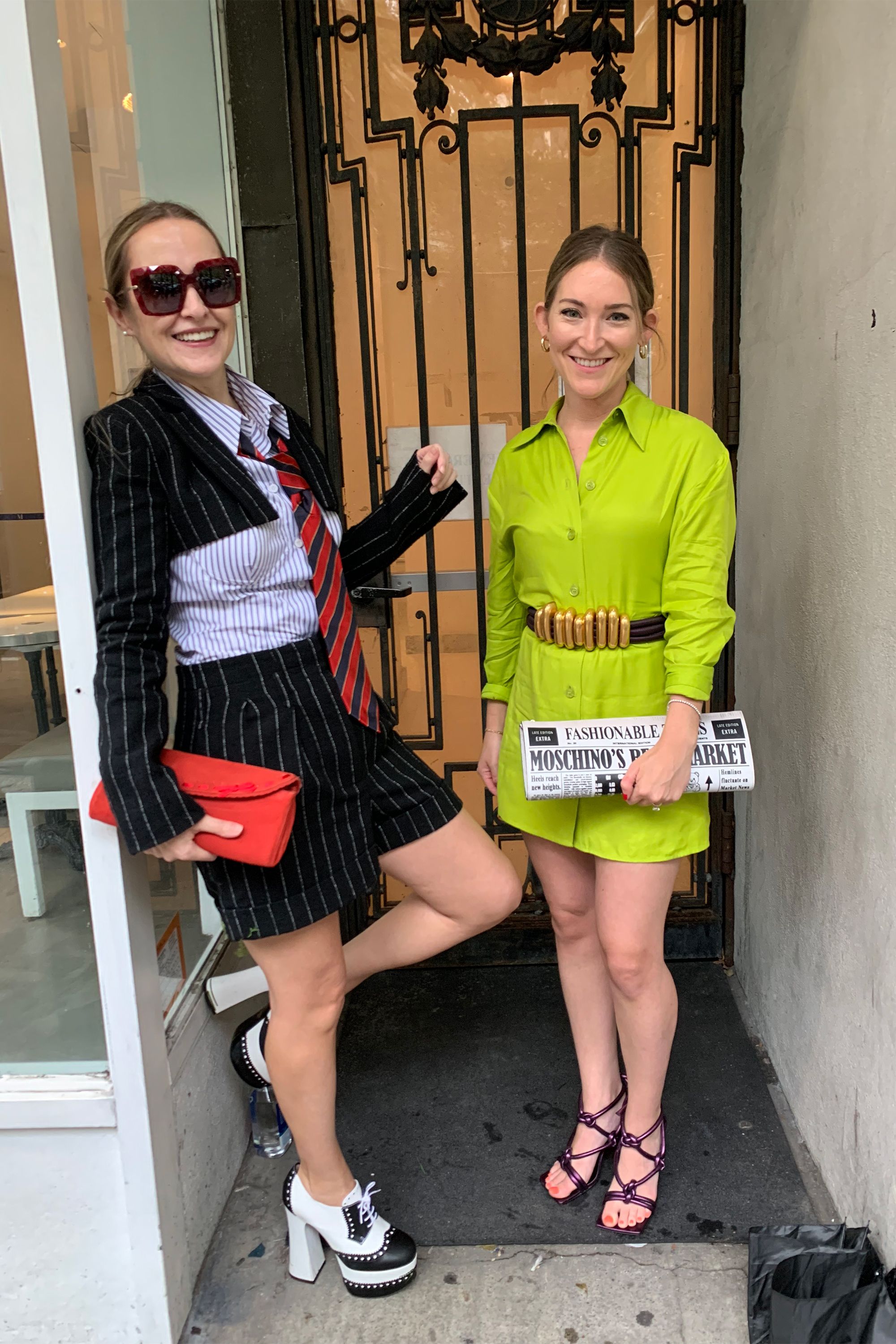 She’s not the only one. It’s day three of New York Fashion Week, and already, the looks have been so over-the-top that a “normal” amount of street style clickbait—a Louis Vuitton holographic bag, a Valentino vaccine hoodie, the occasional pop of neon chiffon—is barely enough for an Instagram post. Among the fits spotted by Harper’s BAZAAR editors this week: a Tomo Koizumi x Pucci puff piece on a standing guest at Peter Do, a lot of Parade bra tops worn as actual tops, and a literal Halloween costume (this one) outside Collina Strada. 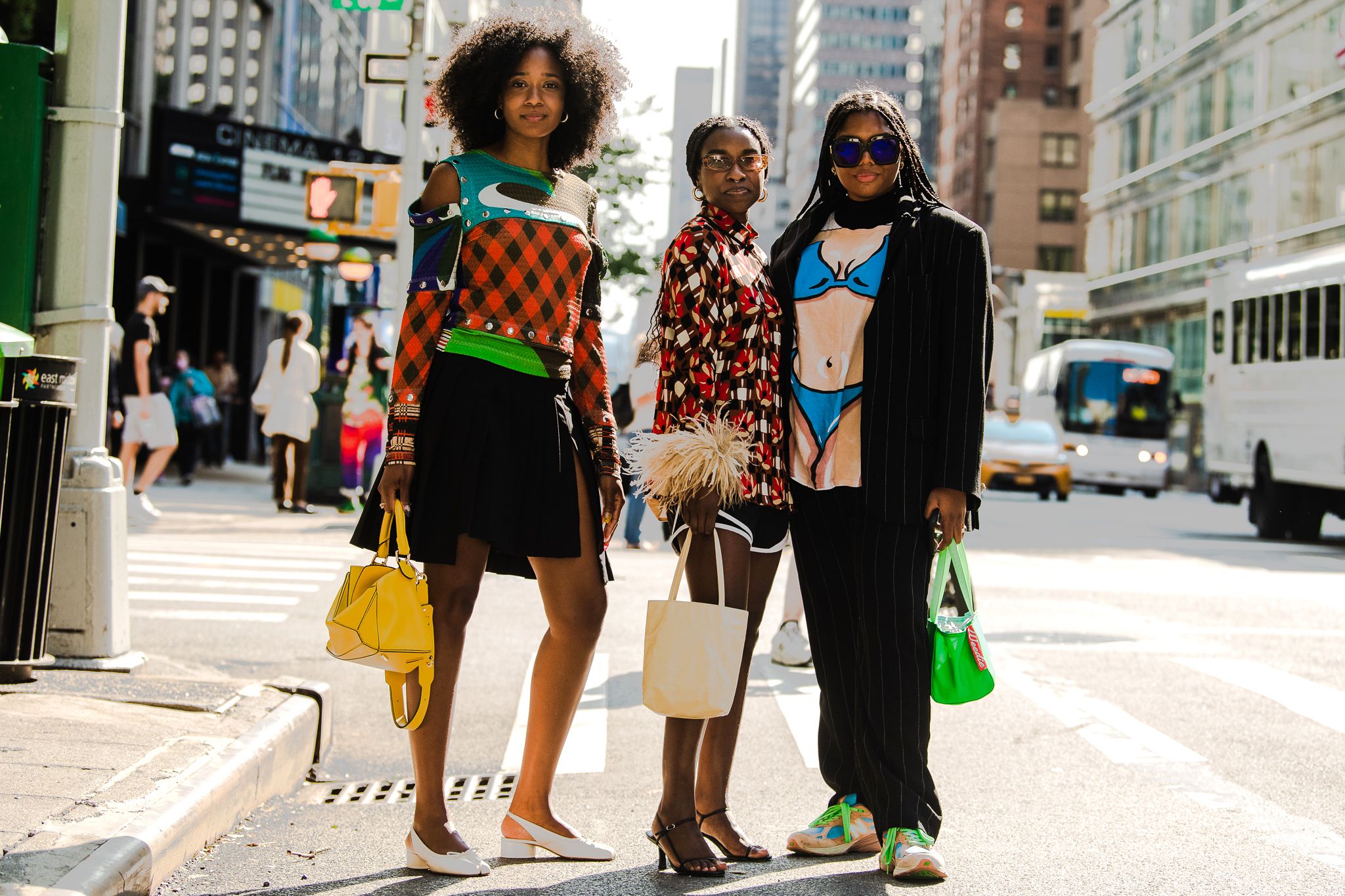 Taking a big fashion risk used to be more nerve-racking; after all, no one wants to be sneered at by the tastemakers in the front row. But times have changed. Exclusion and derision are passé now—hopefully forever—and self-expression is in. Bullying is out, and DIY designers like Vaquera and Collina Strada have gone mainstream. Plus, many of us have been inside for a year and a half. So why not have some fun? 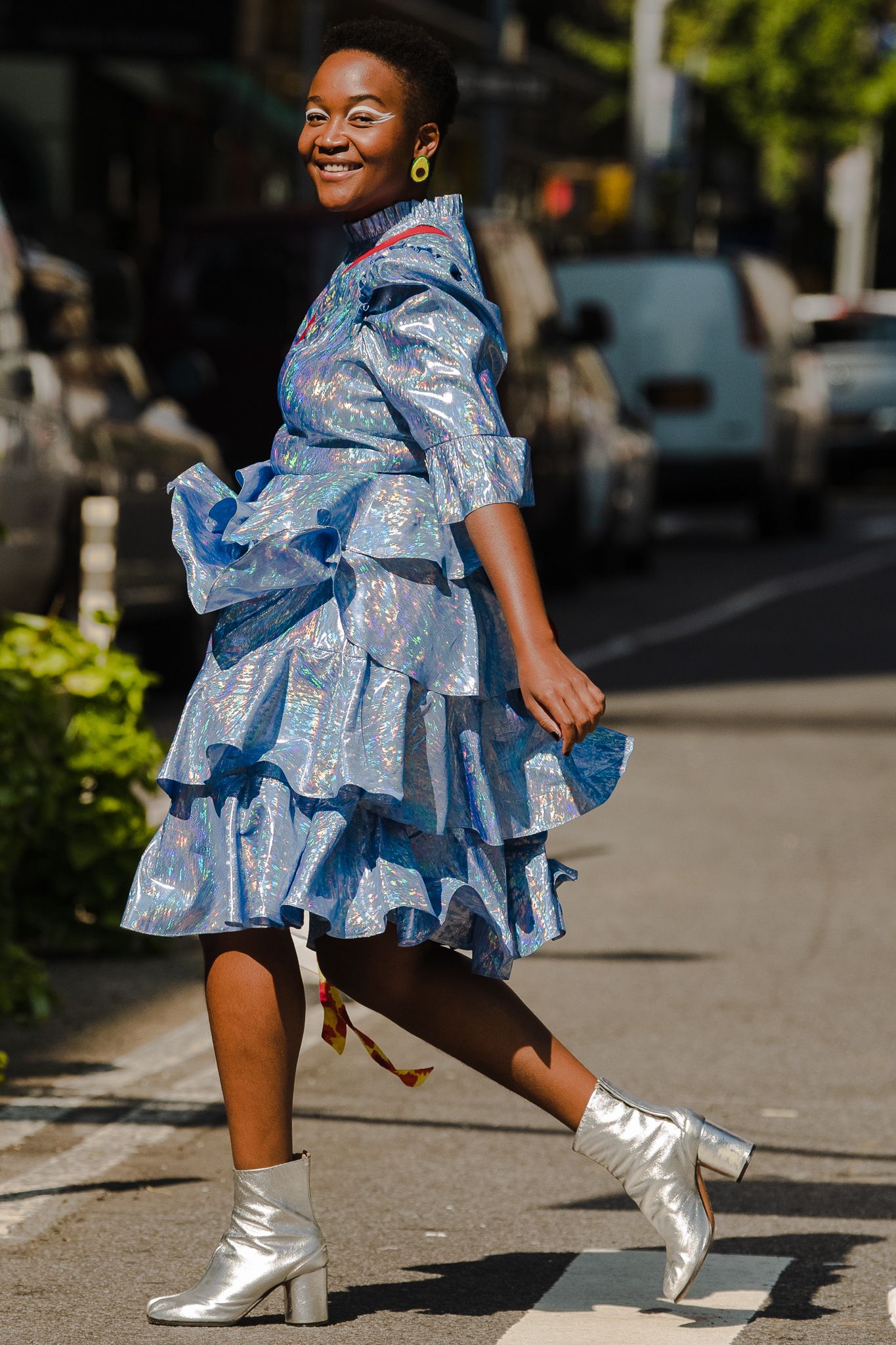 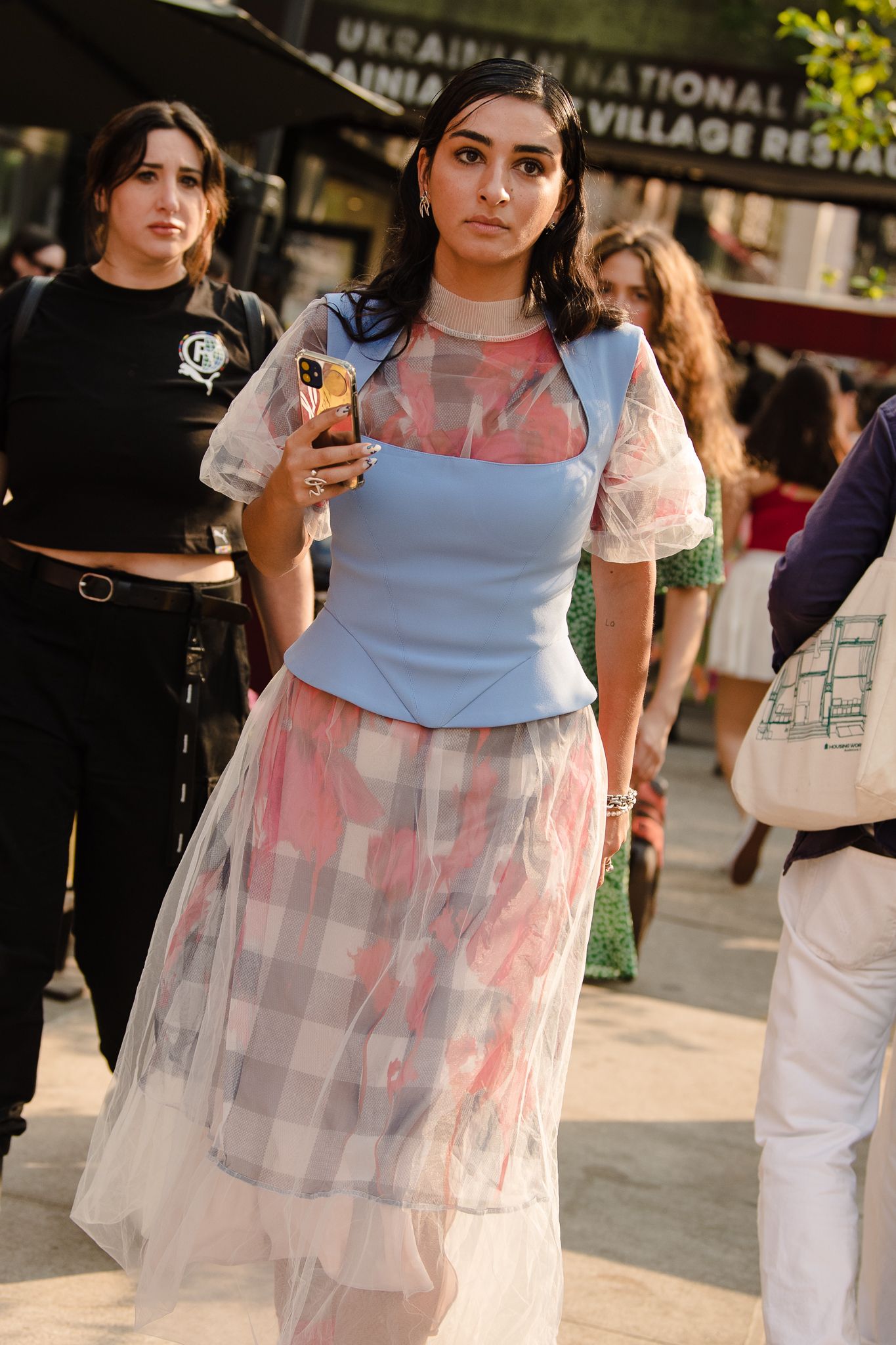 “Fashion is personal, but I never take someone else’s bad attitude personally,” Gigi Burris, the milliner whose leather bows and veils have become street style must-haves, says. “If someone loves my outfit, I hope they tell me. And if they don’t love it,” she laughs, “well, it doesn’t matter, because I do!”

Burris is well established with clients like Sarah Jessica Parker and Bella Hadid, but the next generation of fashion folk feel the same way. “I love clothes so much, because a great outfit can make other people happy, and that should be everyone’s mission!” Charlotte Karcher, a 14-year-old student who wore an Amazon-procured bunny hoodie over a mod ’60s shift dress to the Cynthia Rowley show, says. “Sure, some people leave really rude comments on social media, especially guys,” she says, rolling her eyes, “but what they don’t understand is that fashion is art, and you get to live it. Nobody can stop me from loving that.” 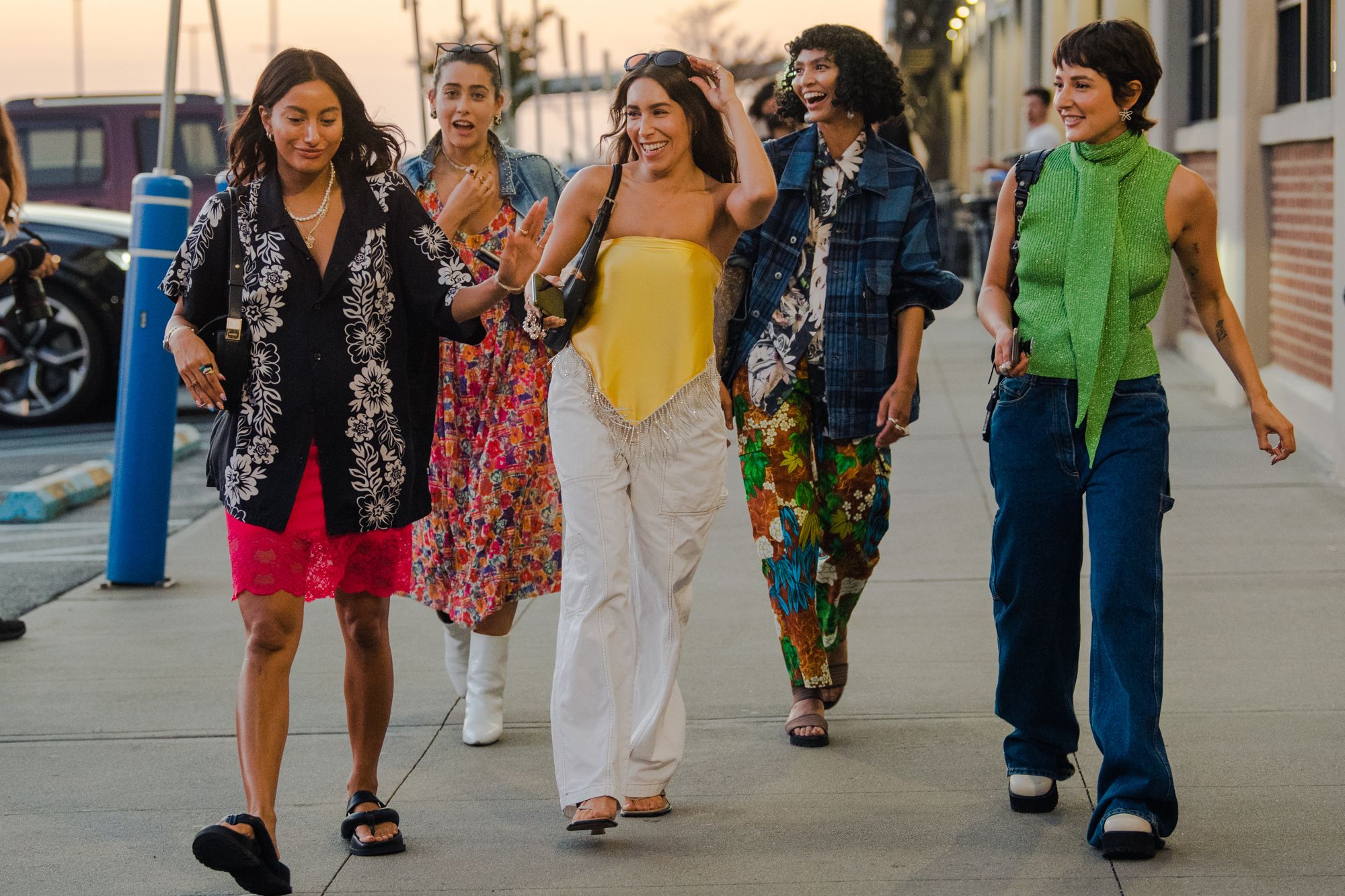 Then there’s Ana Escalante, a student at the University of Florida who is skipping class to extend her internship with PAPER Magazine’s fashion news desk. “I’ve grown up watching Fashion Week on Instagram,” she says, “and so when [fashion editor] Mario [Abad] said I could help him with coverage this season, I was like, ‘I’ve been waiting for this my entire life.’ And with my looks, I was like, ‘It’s now or never.’ I stopped eating out and buying drinks for, like, the entire summer so I could afford some dream pieces.” Those include a metallic Saks Potts bodysuit, a vintage quilted Chanel tote, and a pair of sandblasted wide-leg jeans that could be from American Eagle or Gucci, depending on who’s asking. 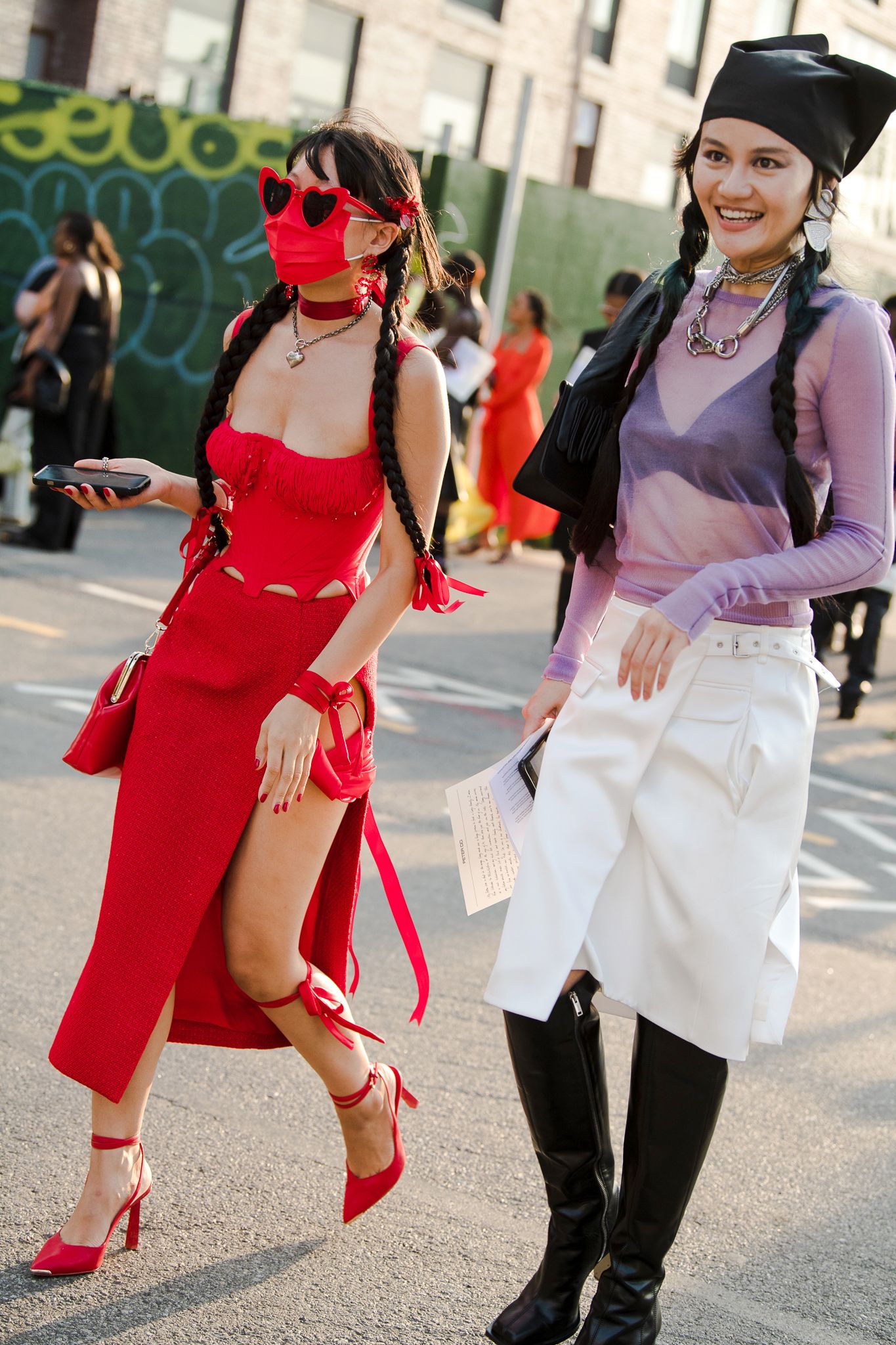 As for me, it’s no secret that I love to wear my favorite pieces—some combination of vintage rock tees from my mom and poufy princess dresses from Miu Miu—every chance I get. But even I thought, “I may have Bradshaw’d a little too close to the sun” en route to Proenza Schouler, when my archive runway dress from Mrs. Prada’s 2006 collection got caught in a subway door. (To be fair, I saw a beaded Simone Rocha frock skirt suffer a similar fate after Carolina Herrera, though it was slammed into the door of a town car. Ouch.) I’d found my dress on eBay nearly six months ago, and I’d be lying if I didn’t say I’d been planning it’s #NYFW debut ever since hitting the buy button. 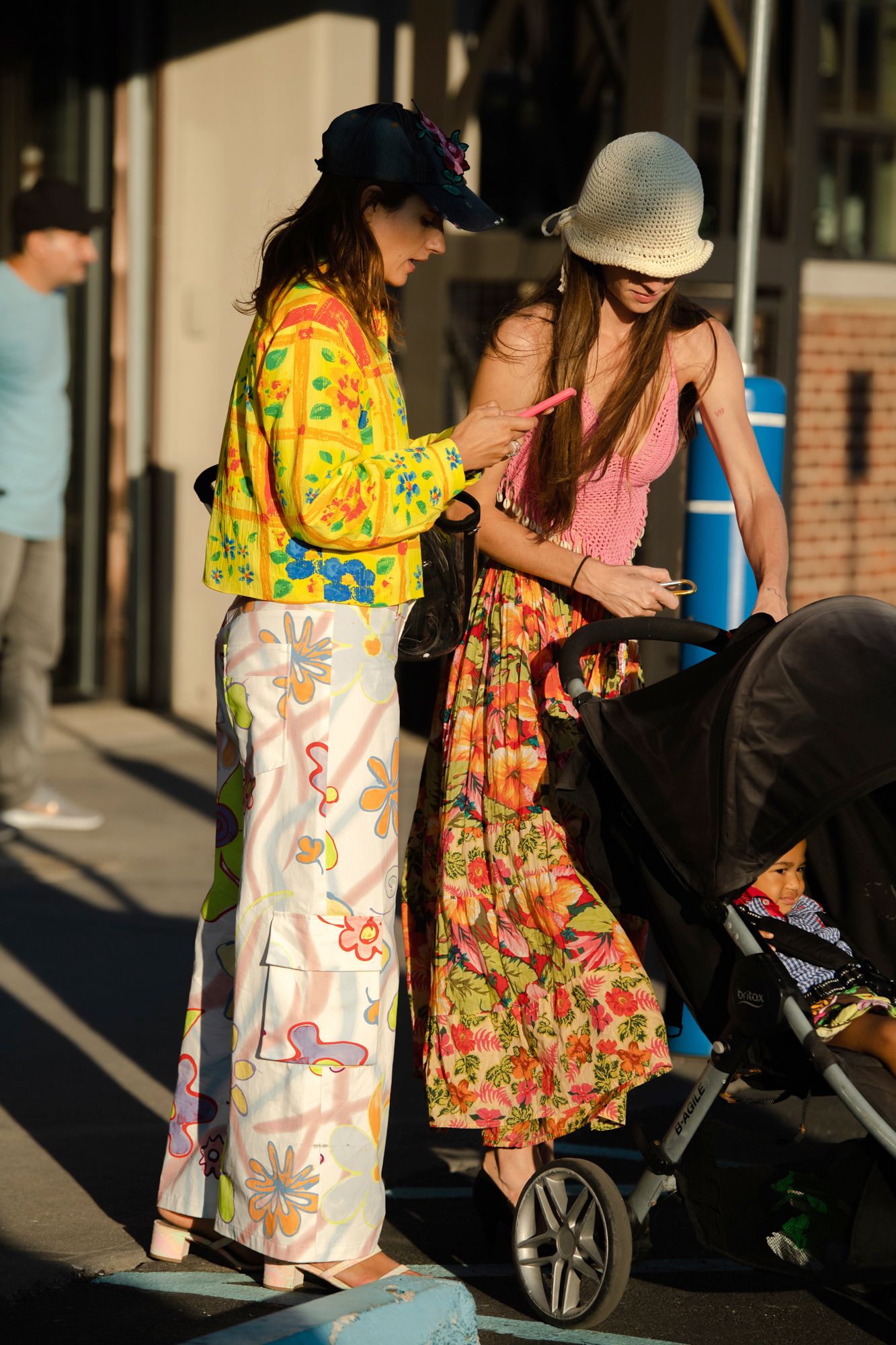 “We were all dreaming of what to wear to Fashion Week when we couldn’t go anywhere,” Jaime Xie, the breakout Bling Empire star whose emotional attachment to a Balenciaga clutch spurred a million memes (and a lot of endearment from the industry), says. “But even though the runways are back, I think people are being both braver and more thoughtful about what they wear. For instance, I knew this season I wanted to push myself, style-wise, but I also wanted to wear archival pieces and participate in a more circular idea of style. A piece doesn’t have to be new if it’s new to you. And when you wear something from a designer’s past collection, you become part of that brand’s history.” 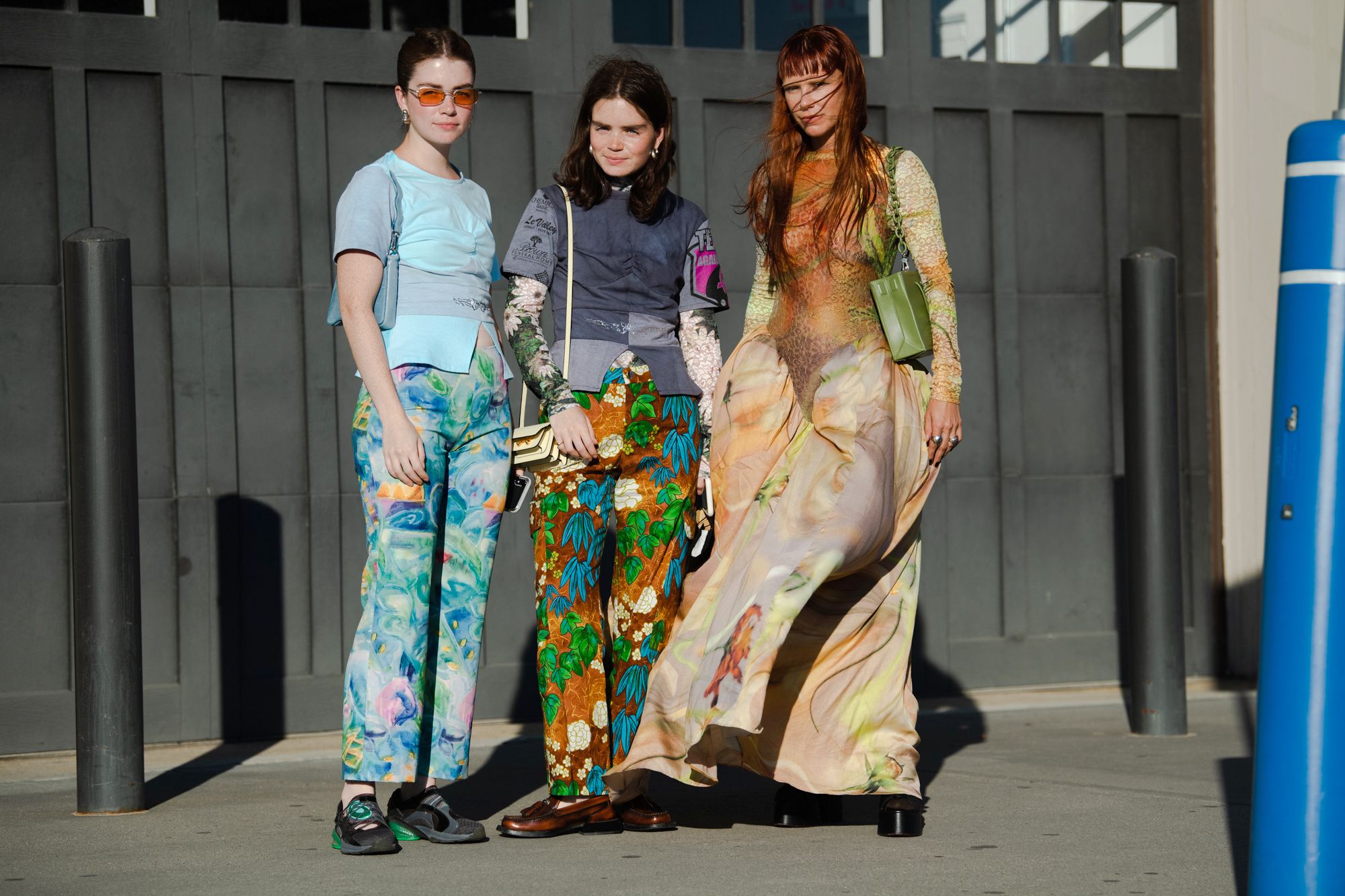 Which means that when Xie is photographed in a past-life piece, like her recent Roberto Cavalli leopard-print dress, she joins the legacy of women (including Victoria Beckham and Beyoncé) who’ve touched the same seams—and made the prospect of a puff-sleeved spotted evening gown seem a little less crazy and a little more “crazy in love with fashion.” 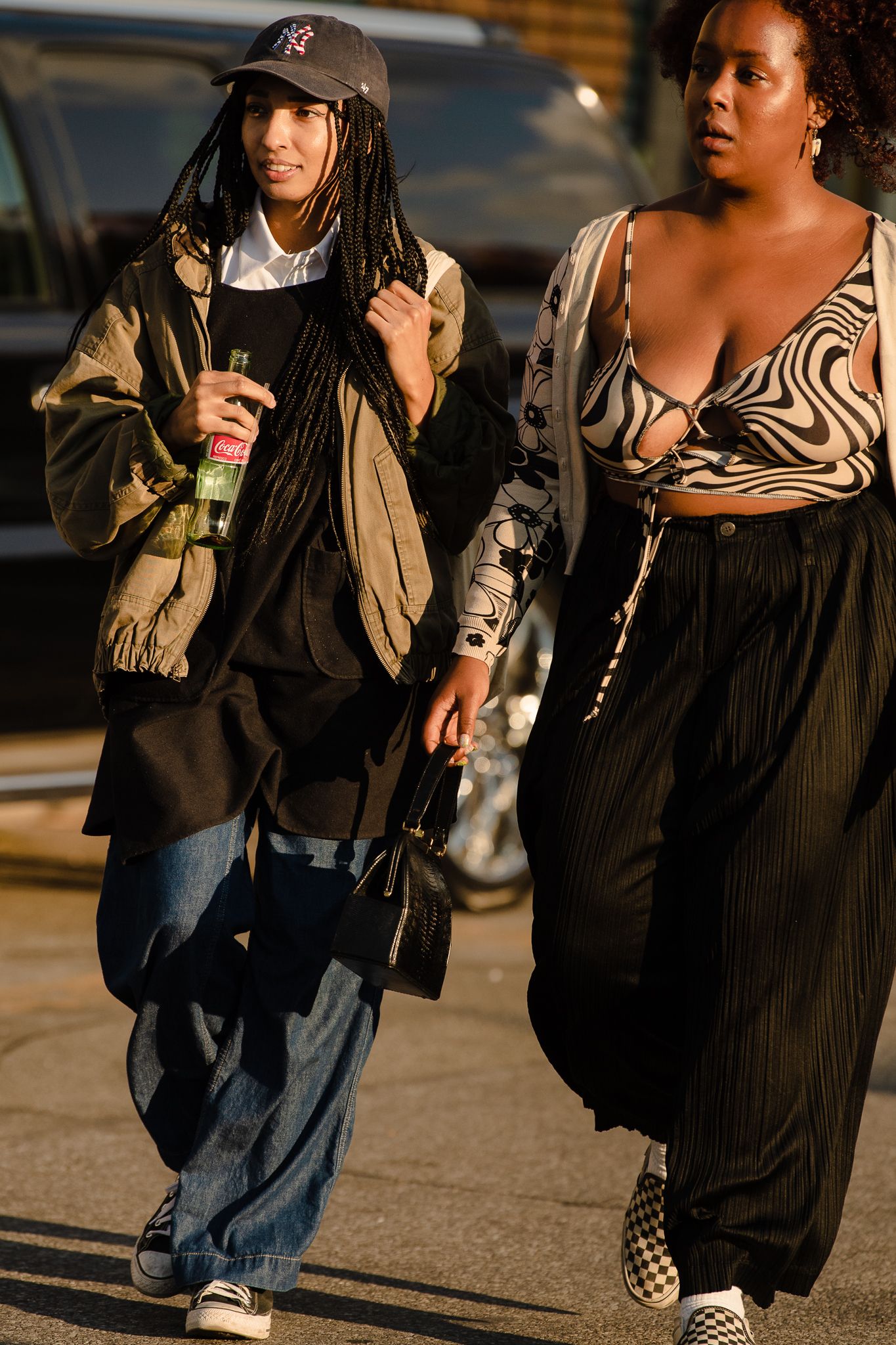 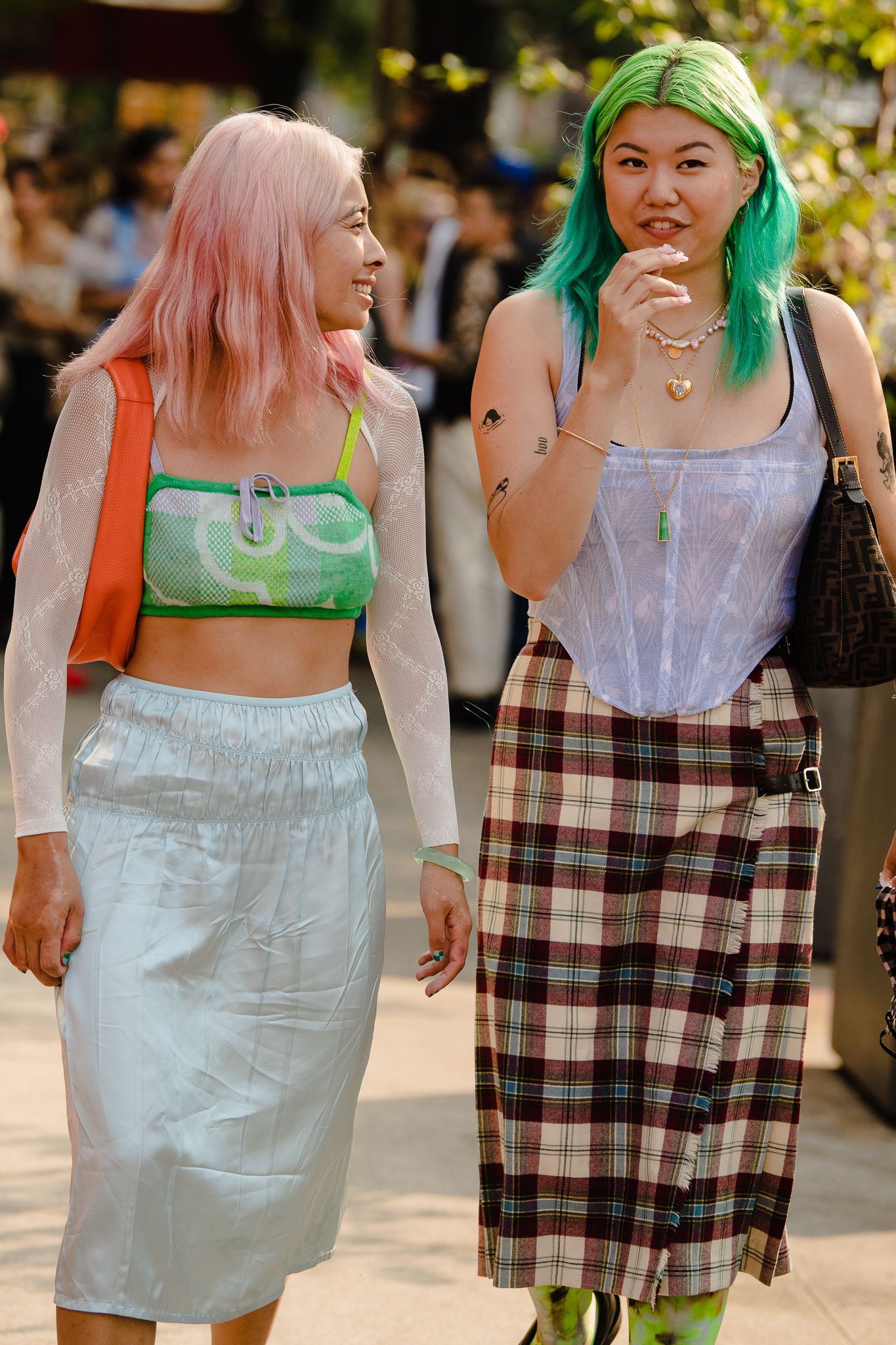 Back on 42nd Street, the rain is abating and the best-dressed tax pros in New York are posing for a quick photo before heading back to work. “You have to work hard to get noticed in the fashion world!” Franco laughs. “And although I dress primarily because I love it, I do want a little external validation. It doesn’t have to be a lot, but at least one person saying, ‘This works!’ gives me a real rush. So I don’t mind being extra-committed to my look if it means I get that nod. It’s harder to feel good if I don’t.” 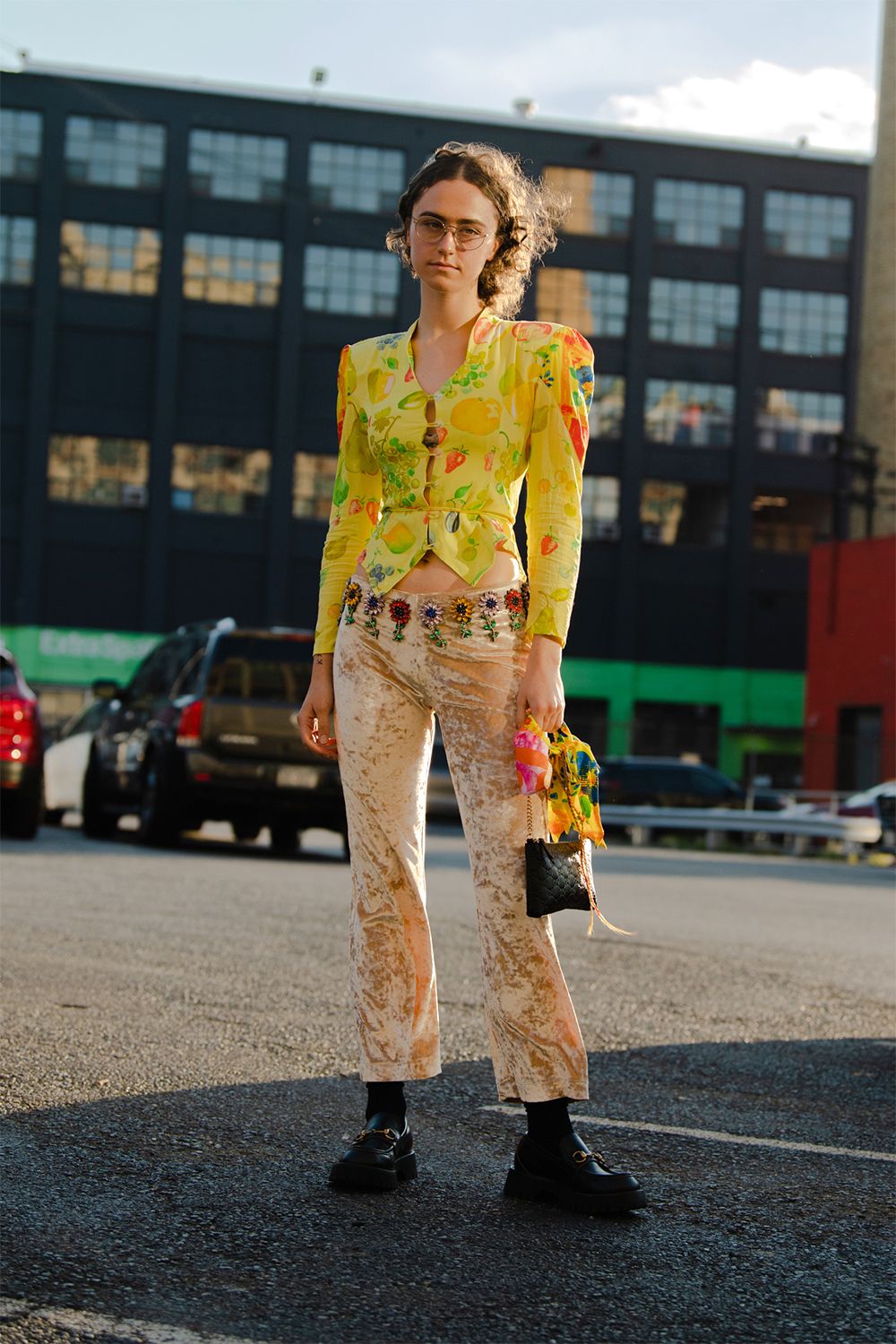 The glam TV stars who haven’t aged since their prime time heyday, from Jenny Powell to Melinda Messenger