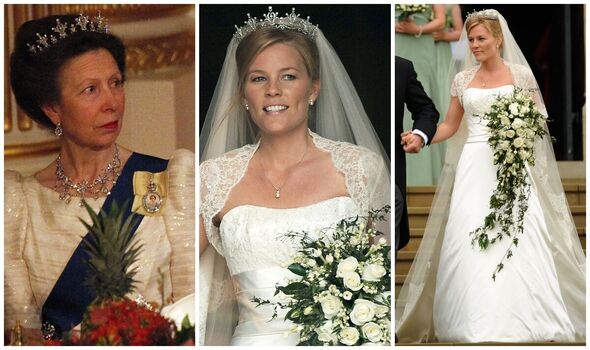 Autumn Phillips married Peter Phillips on May 17, 2008 at St. George’s Chapel in Windsor Castle. Sadly, after more than a decade together, Peter and Autumn divorced in 2021. But she did wear some gorgeous royal jewels on her wedding day.

Autumn kept her jewellery simple but beautiful for her wedding.

Her major accessory was Princess Anne’s Festoon Tiara, which was loaned to her for the day by her mother-in-law, the Princess Royal.

The tiara is delicate, with just enough height and fullness to be a stunning royal sparkler.

The antique diamond piece is complete with ribbons, bows and pendant drops.

This occasion marked the first time the Festoon Tiara had been worn in public by anyone other than Princess Anne.

The classic diamond tiara had been in Anne’s jewellery collection since 1973.

It was presented to the Princess by the World-Wide Shipping Group, a Hong Kong firm after she christened one of their ships.

The tiara was a perfect complement to Autumn’s wedding dress and veil, which was also edged in lace.

However, Autumn was not allowed to keep the loaned tiara from Princess Anne.

Since her wedding, Autumn has not been seen wearing the tiara again. Tiaras that are loaned to other members of the Royal Family are not theirs to keep, hence why they are returned to their original owner.

The tiara was returned to Princess Anne, who has been seen wearing it many times.

This includes a banquet at the Guildhall in 2017 when the Princess Royal paired the sparkler with the matching necklace.

The jewels were reportedly her wedding gift from Peter.

Autumn wore the classic set often at royal events during the couple’s marriage, including an appearance at the wedding of Prince William and Kate Middleton in 2011.

For her wedding dress, Autumn turned to a British fashion designer, Sassi Holford.

The gown, made of satin and lace, was strapless, but Autumn added a lace bolero to cover her shoulders for the wedding ceremony.

“Doing such a gown does kind of encompass all the emotions the bride feels on her day – I was excited, then terribly nervous, then full of joy,” the designer said at the time.

Peter met Autumn at the 2003 Montreal Grand Prix, but it was about six weeks before she found out he was Queen Elizabeth’s grandson.

The Awkward but Essential Art of Office Chitchat

Ben Fogle on sex, overcoming dyslexia and the grief of losing his son