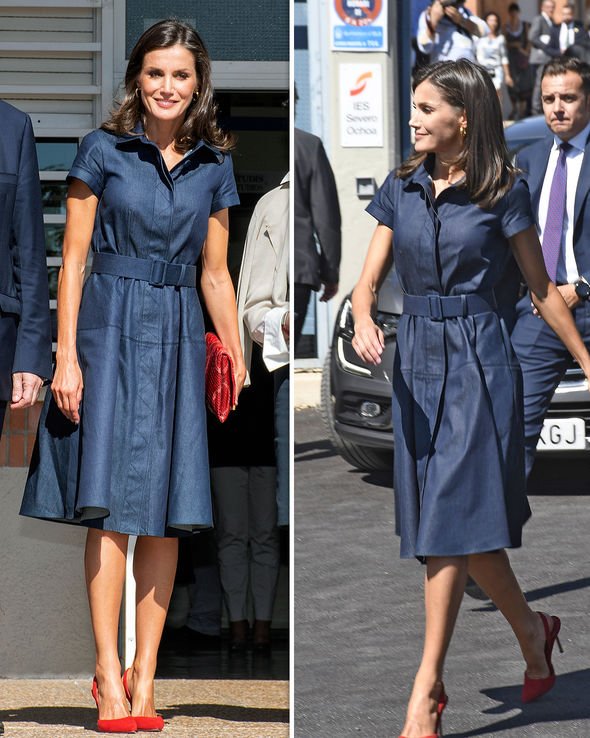 Queen Letizia of Spain is known for the gorgeous and stylish pieces from her wardrobe, and the Spanish monarch decided to recycle one of her looks today as she attended an opening event in Elche, Spain. The 47-year-old mum of two was seen stepping through the doors of I.E.S Severo Ochoa, a secondary school in the small city of Elche in one of her favourite Carolina Herrera dresses – a navy blue denim dress – which she first debuted back in April. The elegant and fun denim dress, which is now sold out online, had short-rolled sleeves, a open collar neckline and fell just under the knee in a skater style, the dress also included a belt of the same material which accentuated her tiny waist. She teamed the dress with some killer red Carolina Herrera Essential Slingback Suede pumps, which added height to her petite 5’7 frame.

Both the dress and shoes were part of Carolina Herrera’s SS19 collection.

The style Queen wore her brunette locks down with a soft and natural curl, which was then framed by simple gold hoop earrings.

Upon arriving at the establishment, Letizia met with faculty as well as students.

The educational establishment, I.E.S Severo Ochoa, will now be offering professional and vocational courses to its attendees, and Leitizia was there to help mark the significant event. 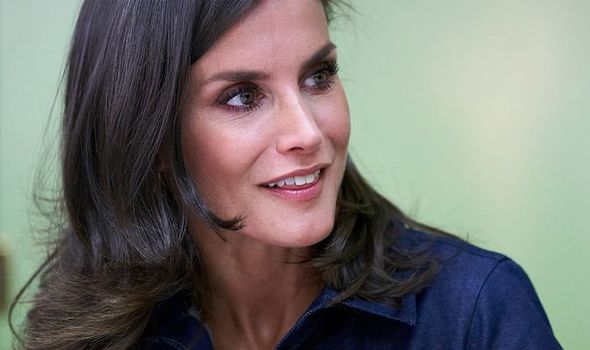 She was accompanied by the Spanish Minister of Education, María Isabel Celaá Diéguez and the Mayor of Elche, Carlos Rodriguez Serna.

When Queen Letizia last wore the denim frock, it was compared to Meghan Markle’s own denim number, which was also cinched at the waist with a denim belt.

The Duchess of Sussex, 38, first wore the dress back in July 2018 while attending Prince Harry’s polo match.

Her dress was desired by the same designer as Queen Letizia’s, Carolina Herrera, priced at £2,357 a stark contrast to the one worn by the Queen which retailed for £640.

The Queen of Spain earlier this week also attended an AECC event to mark World Cancer Research Day at Museo Nacional Centro de Arte Reina Sofia in Madrid – where she decided to once again recycle a favourite Zara dress.

The chic off-the-shoulder tweed dress with gem buttons is currently retailing at a bargain price of £19,99.  Although Zara styled up the dress in quite a low-key way on its website, pairing it with white lace-up boots and no jewellery, Letizia proved that it can be worn for a glamorous event too.

Changing up from her day look, the royal opted for a slightly darker, but still natural, glamorous look with dark brown eyeshadow, contoured and highlighted cheeks and a nude matte lip.

In her role as honorary president of the Spanish Association Against Cancer (AECC), Her Majesty was welcomed on stage by Isabel Martínez-Noriega, Director of Marketing and Communication of the AECC to address the audience.

Last week, the royal attended a conference on Good Practice in Rare Diseases promoted by the Spanish Federation of Rare Diseases (FEDER), and visited the State Reference Center for Care for People with Rare Diseases and their Families (CREER) in Burgos. She wore a Sandro Paris all over print long silk dress.

My baby-faced toyboy lost me my job, home and beat me with a DOG CHAIN – I ended up living in a tent – The Sun

Why are Golden Goose sneakers so expensive?