When it came to romance, Karen Soltero adhered to two strict guidelines: “Don’t get involved with someone whose hair is nicer or longer than yours, and don’t date anyone you could have potentially given birth to.”

So in April 2018, when Ms. Soltero found herself chatting with Andres Peña, whose hair was twisted into a small knot atop his crown, she paused.

“I never trust a guy in a man bun,” said Ms. Soltero, 45, who works in sales in the Dallas office of Stampede, a global audio visual distributor based in Buffalo.

This was even before she learned that he was 16 years, 4 months younger than her.

But she had no chance to put her dating rules into action. The minute Mr. Peña, 28, who then worked for QA Systems, an audio visual integrator in Austin, Tex., spotted her he was smitten.

“See that girl with the colored dress, sitting on the couch,” he said to a colleague while in Augusta, Ga., where they all were at work events aligned with golf’s Masters Tournament. “I’m going to go after her and see what happens.” 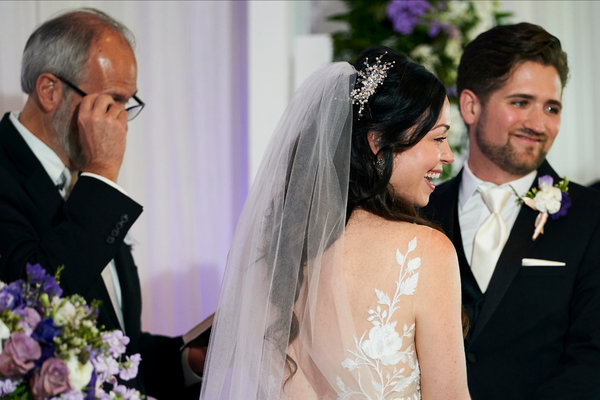 He sidled over and began talking with Ms. Soltero.

“He had a really nice smile and twinkly eyes,” Ms. Soltero said. And she liked his Spanish accent.

But Ms. Soltero was taken aback by his last name. It was the same as the woman convicted in 2002 of murdering her 22-year-old sister, Wendy Soltero. They even had the same first initial. “Peña’s a hard name for my family,” Ms. Soltero said.

After drinks, the group moved to dinner, but Mr. Peña showed up after everyone was already seated. The only available spot was next to Ms. Soltero. He grabbed it.

Over seafood and French 75’s, a cocktail made from gin, Champagne, lemon juice and sugar, she learned that he had been born in Monterrey, Mexico, but moved to San Antonio, Tex., at 14. He had two brothers and four half brothers, and a dry sense of humor. She was charmed, but wary. “He was cocky and overly self-confident,” she said.

He, in turn, was intrigued by the blue-eyed, raven-haired woman before him, who he would learn was more than just a pretty face. “She was fun yet shy, intelligent yet goofy, spontaneous yet grounded, sweet yet tough,” he said.

Tough was an understatement, especially when it came to handling family tragedy. Ms. Soltero and her younger sister were best friends who lived together in North Hollywood, Calif. Ms. Soltero was in an M.B.A. program at Claremont Graduate University and Wendy Soltero was studying art at Occidental College. On the morning of Oct. 28, 2000, Wendy went to pick up two friends who had been out at a nightclub. She was shot and killed during a robbery while parked outside.

Ms. Soltero and her parents, Elizabeth and Gene Soltero of Dallas followed the two-year legal process, and Ms. Soltero gave a victim statement at the sentencing. After her sister’s death, Ms. Soltero spent the next few years foundering. She eventually moved back to Dallas and opened an exercise studio. She had a few serious relationships but nothing stuck, and although she wanted a family, she wasn’t willing to settle.

“There were people I dated at multiple points in my life I could have married and had kids with, but I was never willing to have a starter marriage just to have babies,” she said.

In 2013, a group A strep infection somehow got into her bloodstream, which morphed into necrotizing fasciitis, a flesh-eating bacteria. Doctors almost had to amputate her leg to save her life; she spent three weeks in the hospital and had 13 surgeries. “I remember my mother saying to the doctor, ‘I already lost one daughter, you keep her alive,’” said Ms. Soltero, who has a 22-inch scar on her left leg from the ordeal.

Four years later, she was diagnosed with breast cancer and had a double mastectomy. “You have these moments where you’re like: Are you kidding me? Again?” she said.

Mr. Peña also understood hardship. When he first moved to the United States with his mother and two brothers, he went through major cultural challenges. At 10 he almost died after his appendix burst.

His relationships didn’t pan out, either. For years he dated only Mexican women, but secretly he wanted something less traditional. “I always wanted an independent woman, someone who didn’t need me,” said Mr. Peña, who has a degree in civil engineering from the University of Texas, Austin. “I knew I was going to be with a very liberal Mexican girl or a more progressive American girl.”

Ms. Soltero may have been the American woman of his dreams, but when he learned her age, he hedged. He wanted children, and he didn’t know how she felt about that. Still, they had so much fun and were so comfortable together during the Masters golf events, that he brushed his concerns aside. Before the weekend in Georgia ended, he announced that he was going to take her to dinner when they returned to Dallas. Not a question, a fact. Ms. Soltero told her mother about the slightly arrogant young man she had just met, and how she worried about the age and cultural differences.

“I said, go for it!” said Elizabeth Soltero, who works in clinical cardiovascular research. “She just seemed so happy.”

Ms. Soltero also knew that her sister would have approved of Mr. Peña. In a way, it felt as if she had sent him to her. “I thought, ‘This is the universe giving me a positive connotation to the name,’” she said.

They went out for Cinco de Mayo, and Ms. Soltero realized that it wasn’t ego that was fueling Mr. Peña, but confidence. “This guy was just good with who he is,” she said. “That was a surprising and very different thing to experience.”

During a work-related trip to Las Vegas in June, they talked about making the relationship exclusive. But first, he needed to know how she felt about children. “I didn’t care how we had them — in vitro, adopted, foster — I just wanted them,” he said

What he didn’t know was that Ms. Soltero had frozen her eggs at 40. Coincidentally, shortly after going out with Mr. Peña for the first time, she had an appointment with her fertility doctor to discuss whether to move forward on her own. “The doctor said, ‘You’ll need sperm in its 20s,’” she said with a laugh. “I thought, well, maybe this younger guy is sort of serendipitous. It was uncanny timing to get some tall dark sperm.”

The couple soon realized that despite their chronological age differences, they were at the same place in their lives. “Age is just a number for how long you’ve been on the planet,” she said.

Mr. Peña’s mother, Reyna Castaño, an artist, agreed. “I see them together and I see how happy and in love they are,” she said in Spanish, adding that the age difference “is not important to me.”

Ms. Soltero sees herself as a young soul. “A lot of my life stopped at 26 when Wendy died,” she said. “My growing up got stunted in a way, so I lost some time. A lot of my life now is about capturing youth and energy and vitality.”

The couple were married July 13 at the Royal Oaks Country Club in Dallas, before 230 friends and family members, including Mr. Peña’s father, Jorge Peña Sr. of Monterrey.

Bobby Harrell, Ms. Soltero’s college mentor from her undergraduate days at the University of California, Los Angeles, officiated; he was ordained by the Universal Life Church. Her high school friend Josh Einsohn oversaw a Celtic knot-tying ceremony. You could hear sniffles when Elizabeth Duffy, Wendy Soltero’s best friend from preschool, carried a bouquet down the aisle, taking on some maid-of-honor duties. She placed the flowers on a pedestal with a photograph of Wendy.

“I feel like Wendy communicates with me through radio and her favorite song came on,” said Ms. Duffy. “She loved REM. ‘It’s the End of the World As We Know It’ came on earlier. I told Karen, ‘Wendy’s ready for this.’”

Mr. Peña’s best man, Eric Alanis, a high school friend, swallowed hard to silence his cracking voice and tears. He read a text he had received from Mr. Peña when Mr. Alanis was going through a rough time. “‘I’m just a phone call away’,” he read. “‘You’re never alone.”’

“I consider our friendship one of our life’s greatest blessings,” Mr. Alanis said.

Guests gathered at a buffet-style dinner, which included traditional Texas barbecue — brisket and chipotle barbecue sauce with Texas toast — on one side, and salmon en croute, grilled squash and zucchini and lemon risotto on the other. Later, the full wedding party danced choreography to Justin Timberlake’s “Can’t Stop the Feeling!”

Mr. Peña “just lifts her,” said Molly Setnick, Ms. Soltero’s closest childhood friend. “Not that she was sinking and she didn’t need saving, but it’s like the Shel Silverstein story ‘The Missing Piece.’ The better version of that story is Karen and Andres because she was missing a piece and he was probably missing a piece, too. They fit together.”

In a break from tradition, and to erase memories of Wendy Soltero’s killer, the couple will legally take Mr. Peña’s mother’s maiden name, Castaño, as their new surname. “My mom has always been there with me through thick and thin, showing me how to be compassionate, loving, and resilient,” he said. “We want to honor that special relationship I have with my mom, and allow a new generation to carry the Castaño name.”

Ms. Soltero also pointed out that soltero means single in Spanish, which she isn’t anymore. “It kind of makes sense to get rid of it,” she said.

Dinner Redux As is the custom in Mexican weddings, there were two sit-down meals, along with a midnight after-party at the Soltero family home.

Adios Amigos: The couple spent their three-week honeymoon on the Greek islands of Mykonos and Santorini, then headed to Cape Town and Zimbabwe for a friend’s wedding. 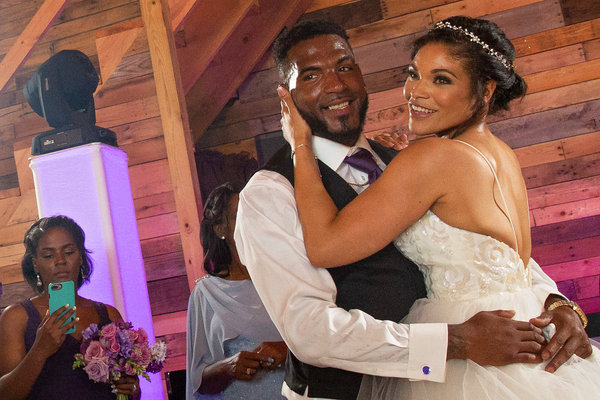 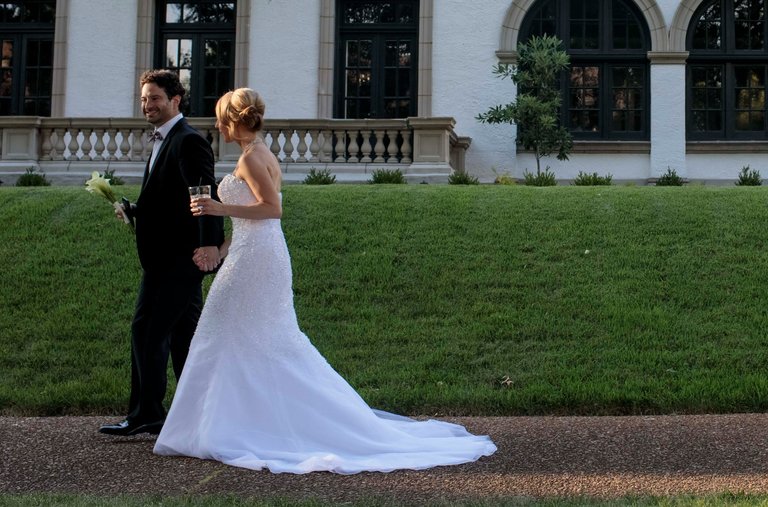 An earlier version of this article, in one instance, misstated the city in which the groom's father lives. It is Monterrey, Mexico, not California.

The 25 Best Jeans for Every Guy’s Style and Budget

Rihanna Shows Off Her Enviable Curves In Skimpy Lingerie Ahead Of Valentine’s Day: ‘Be Mine’

I Shop For a Living, and These 10 Pieces Landed in My Cart This Week For Under $25