Home » Fashion » ‘The language of modelling changed’: Claudia Schiffer looks back at her career

In 1987, a shy 17-year-old called Claudia Schiffer was at Checker’s nightclub in Düsseldorf, when a stranger approached her and asked if she wanted to be a model. “I thought it was a joke,” recalls Schiffer, now 51, who at the time was still self-conscious about her height (180 centimetres). But the man, who worked for a French modelling agency, was insistent – and, a few days later, accompanied by her mother, Schiffer found herself in Paris. 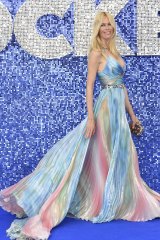 Within weeks, she was living in the French capital, hanging around with her new friend, the up-and-coming German photographer Ellen von Unwerth – “and the rest,” Schiffer says, “is history”. By the following decade, she had established herself, alongside Naomi Campbell and Cindy Crawford, among the “Big Six” supermodels who revolutionised the fashion industry.

Recently, Schiffer – who lives in Suffolk with her husband, English film director Matthew Vaughn, and their three children – has been thinking a lot about those early days. Invited by the director of Düsseldorf’s Kunstpalast museum to curate Captivate!, a show of fashion photography from the 1990s, she spent lockdown sifting through thousands of digital images, as well as her own “library” of fashion magazines and “shoeboxes of memorabilia”. An accompanying book, featuring 150 photographs, including backstage snaps from Schiffer’s personal archive, is about to be published.

Part of the volume’s fascination is, simply, the insight it provides into an extraordinary life. We see Schiffer’s first test shot as a schoolgirl posing in a baggy baseball jacket. Crimped blonde hair covers one of her eyes, suggesting, perhaps, her introverted disposition. Any diffidence, though, soon disappeared.

Two years later, Schiffer was modelling for the black-and-white Guess Jeans campaign that would make her famous: feeling at ease with Von Unwerth, who shot it in Italy, she danced about in a black lace corset and stonewashed denim, part carefree cowgirl, part Brigitte Bardot. “It often just felt like two friends mucking around,” Schiffer tells me now. “And that’s your perfect shoot, where the chemistry between photographer and model happens.”

Yet it was the controversial German designer Karl Lagerfeld who, she says, “came into my life and changed it forever”. Impressed by the German teenager’s first cover for British Vogue, shot by Herb Ritts in 1989, Lagerfeld invited her to see him in Paris. “I entered his studio on the Rue Cambon full of nerves,” she recalls, “but within hours I was being fitted for his new collection.” Lagerfeld, who died in 2019, was, she explains, always “incisive” – and after their meeting, he made Schiffer the face of Chanel. 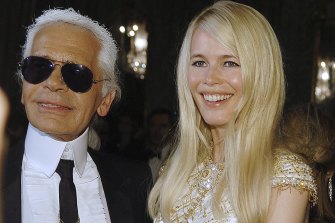 Really, though, Captivate! is less a portrait of one person than of an entire art form. As Schiffer points out, fashion photography is “an intricate jigsaw of experts from all fields”: art directors, stylists, hair and make-up artists, editors – and, of course, the “superstar” photographers, among them Richard Avedon and the colour-blind Helmut Newton, some of whom became, she says, her “mentors”. 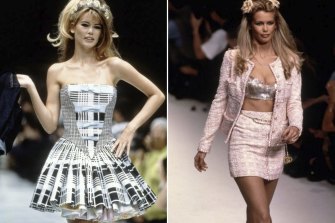 Claudia Shiffer in Versace in 1991 (left) and in Chanel in 1994.Credit:Getty Images

Whereas the industry in the 1980s was, she says, obsessed with “perfectionist high glamour”, the 1990s ushered in an age of “fearless creativity”. A new aesthetic mixed high with low – pairing a Chanel jacket with vintage Levi’s – and a younger generation of provocative photographers, including Corinne Day and Juergen Teller, pioneered “dirty realism” by, for instance, shooting models without make-up. “As a result,” says Schiffer, “the language of modelling changed. The clichéd poses were replaced by idiosyncratic gestures, with photography focusing on ‘off-guard’ moments.” 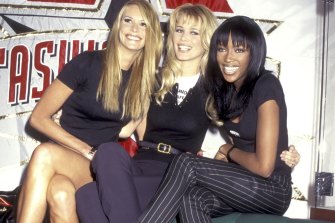 The still point in these shifting tides was the “sexy glamour” of the supermodels, who, Schiffer believes, kept fashion’s “optimism” alive during the recession of the early 1990s, “when the designer market was in steep decline”.

The “supers” became icons of “self-made success” and “female ambition”: the analogue prototype, if you like, for today’s digital influencers. “Now,” says Schiffer, “the idea that a personality or individual can transcend the brands they work with is accepted – but back then it was very new.” As a result, she adds, “careers started to last longer” and these days models are “working well into their 40s and beyond.” 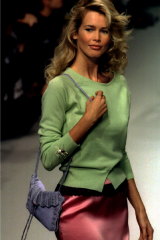 Not, though, Linda Evangelista, another member of the “Big Six”, who recently revealed on Instagram that she had been “permanently deformed” by cosmetic surgery after which she withdrew from public view. “I feel deeply for Linda,” says Schiffer, “and admire her strength for speaking out about the pain she has endured.”

Life as a supermodel was, Schiffer tells me, rarely easy. “It was insane … like being a rock star. You couldn’t get to your car unless a path was carved for you. People would cut holes in the fashion tents and try to take pictures of us.” By the mid-1990s, she was so famous that at her fashion shows security guards were hired specifically to “guard my underwear, which was constantly disappearing when I was out on the runway”. If that sounds creepy, Schiffer assures me that throughout her career she “always felt safeguarded… My mother was my chaperone in my early years as a model and protected me from the seedy side of the business.” But she recognises that “my experience was not everyone’s”.

Eventually, though, Schiffer’s memory often returns to that crucial chance encounter at Checker’s nightclub. “Over 30 years later, I look back,” she says, “and can see how magical that moment was.”

It's Impossible Not to Giggle at Stars in Beauty Masks