Home » The Life of the Party

Bill Cunningham, the much-missed pioneer of street style photography who died in 2016, had two long-running weekly columns for The New York Times — On the Street and Evening Hours — that documented his encyclopedic knowledge of fashion.

Evening Hours, which captured the party and philanthropy scene in New York City, is the subject of a new book published by Rizzoli, “Bill Cunningham Was There,” by John Kurdewan, his longtime collaborator and friend (and a staff editor at The Times), and Steven Stolman, a designer, author and frequent subject of Cunningham’s camera.

Below is an edited and condensed conversation with the two authors.

Bill would ride his bike to over 15 parties a week. Why was Evening Hours such an important column?

JOHN KURDEWAN Evening Hours was so important, not just to Bill, but for the city of New York, because it focused on giving back. These events are where the ultrawealthy of New York and the Hamptons donated money to help the underprivileged.

STEVEN STOLMAN I think that this was Bill’s attempt to showcase the many organizations that served both the city and its people. I really felt like he felt, and rightly so, that he was doing a service to these very noble nonprofits. This was his way of paying it forward and giving back. The difference between Bill being there and not being there was palpable. There was a certain something missing when Bill wasn’t there.

And if Bill was there? The aura of the party became electrified. His presence, meandering through the party tents or on the dance floor or catching the women as they were entering the party, was truly something to behold.

JK I got an email from a woman that said that after Bill’s passing, the donations and the support had dropped off tremendously. 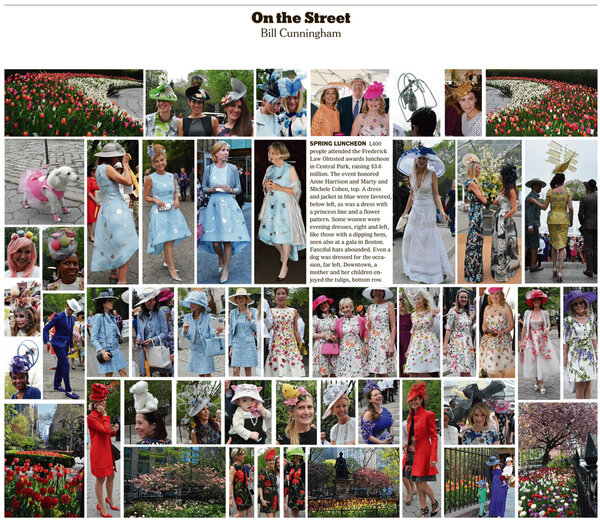 Wow. And one of these events was the Central Park Conservancy hat luncheon, which is resuming on May 18 and 19. Why do you think Bill loved that event so much?

SS For anyone that loves millinery, especially someone that loves millinery as Bill did this, this was just a love fest. The hats are extraordinary. The women at this event traditionally put such thought and care into their outfits. And I think he delighted in it. I mean, you could you could see it in his photography and you can really see it in the pictures of Bill working at this event.

JK And again, there’s another vision that Bill had, because that was something of giving back to the city for the people. It was incredible because it would be one click, two click and then he would go on and see something else that caught his eye and then just walk around and photograph the flowers.

What did your research in his archives tell you about how philanthropy has changed in New York City?

SS Over the years the demographic of the New York philanthropist has gotten younger. As we go through the two decades, that we had access to, it was less grande dames and more involved younger people. You saw the hemlines go up and the heels get higher over the years.

Were there any surprises about Bill?

JK You knew kind of what he was going for, what theme he was looking at and how he was trying to tell stories with each photo. Each photo mattered to him and he wanted to make sure each person in that photo looked good.

SS He would never allow a bad picture to run. And I think that when I look through these photos, the one constant is his ability to capture delight. They’re not mugging for the camera, obviously. He recoiled from that kind of thing. He captured joy.

Was Bill participating in the party as well as chronicling it?

SS He would never even have a glass of water.

JK And that originated from the one time he was in Paris during the ’60s. And they have those big dinners and everyone had an expense account. He overheard someone saying that Bill only comes around to get the food. So Bill told me that he summoned the maître d’ over. There was a Table 13, and he bought everyone’s dinner at that table. From that moment on, Bill never took anything.

And what about his care in laying it all out for the reader?

JK Bill’s vision for Evening Hours was that he wanted to place the most important parties that gave the most to the city. That’s why, for example, Oscar de la Renta, he loved Oscar. If Oscar went to two events, Oscar was on two different parts of the page.

SS The copy is just as engaging as the images. It made you feel like you were at the event. You could hear Bill saying that “the party’s been on forever.”