It doesn’t get more rock’n’roll – not at 10am on a Tuesday, anyway – than lounging on a Biedermeier sofa upholstered in orange velvet, drinking coffee made by Simon Le Bon in his study, which is filled with guitar cases, a black lacquered upright Blüthner piano and a life-sized cardboard cutout of Nick Rhodes, co-founder and keyboardist of Duran Duran.

“That’s very good for scaring off burglars,” deadpans Yasmin Le Bon. “When we go out, we put Nick
centre-front in the bay window.” 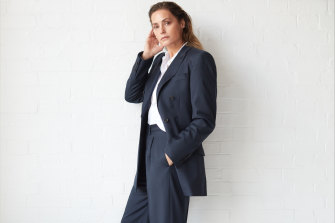 Yasmin Le Bon: “To be honest, I’m not sure lockdown changed my life that much. It’s always been family and close friends first.” Credit:Photography by Adam Whitehead/Telegraph (UK).

The Le Bons’ home of 28 years is probably the least pretentious-feeling celebrity pad I’ve ever visited. Large? Undoubtedly. Staff? Well, there’s Valerie, their long-term housekeeper, who bustles around the kitchen navigating the three dog baskets. And the dog walker who takes Willow (the English bull terrier who’s quite the handful) because Yasmin’s back can no longer cope with her lead-tugging.

Through lockdown there were nine adults chez Le Bon: Yasmin and Simon, their three daughters, Amber, 31, Saffron, 29 (who lives in a cottage abutting Simon and Yasmin’s garden, with her partner Benjamin and children Taro, 3, and Skye, 1), and Tallulah, 27, plus boyfriends and Yasmin’s niece.

“Check out the dead Christmas trees,” laughs Yasmin, gesturing towards the two pots and their brown, drooping contents by the front door. “I’m a rubbish multi-tasker.” When you’re that beautiful and successful and a well-brought-up Brit (while her photographer father is Iranian, she grew up in Oxford), it’s practically de rigueur to undersell yourself.

It strikes me that she views her modelling career as, at best, a passive achievement. Sure, she worked day and night, but it all came quite easily. At 17, she was scouted in Oxford by a local agent. At 19, she took herself off to Models 1 in London, where she’s been ever since. Notwithstanding the close-knit family she’s nurtured, the 36-year marriage, and the 40-year career that’s still going strong (she recently appeared in a shoot for British Vogue), part of her feels frustrated. Yasmin has genuine style. “I used to do a lot of jumble-sale shopping before it was called thrift and I loved photography, so I guess you develop an eye.”

Today, she’s make-up free, her hair is long and she’s wearing a pair of skinny Made in Heaven jeans, a Gucci T-shirt celebrating The Lady Garden (a charity raising awareness about gynaecological cancers), the “Elton John-worthy” socks Valerie gave her (the Le Bons are big on flamboyant socks) and a pair of fluffy lime slippers.

When she’s pulling out the stops, she exudes a loose, polished flair that flies from boho (she loves Isabel Marant and Preen) to rock chic, taking in androgynous tailoring. She has donated mountains of clothing to charity but, even so, the Le Bons are currently availing themselves of two storage facilities nearby.

During lockdown she did give up the fight against grey roots, though they’re now covered. “I would have kept the grey, but a job came through and they asked me to dye it brown.”

Although by her own admission she regularly has a sprinkling of Botox, that’s more or less it. Her two grandchildren, Skye and Taro, call their impossibly youthful-looking granny Zsa Zsa. “Like Gabor,” says Yasmin. “They came up with it themselves. Isn’t it fabulous?”

She and Simon, 62, are hands-on grandparents. “And it’s exhausting. Oh, my god … boys,” says Yasmin. She takes her hat off to Naomi Campbell, who recently announced she’d become a mother at 50. “If anyone can pull it off, she will.” She hadn’t been in touch yet with Campbell when I asked. Yasmin is phone-phobic, and not exactly mad on Zoom. “To be honest, I’m not sure lockdown changed my life that much,” she says. “It’s always been family and close friends first.”

Some of those friends have ended up staying for weeks on end. The Blüthner piano is a gift from John Taylor (bassist with Duran Duran) and his wife Gela Nash-Taylor (co-founder of Juicy Couture), who lived with them for several months.

“Somehow Simon and I have created this home that no one wants to leave,” she muses. “It’s the opposite of what you’re meant to do. But I just love having the children around.”

Even Amber, who bought a flat of her own, doesn’t live in it, preferring the family nest. “During the first lockdown, we’d all have lunch every day in the garden,” says Yasmin. “It was great. Though I’m sure the neighbours thought we were having parties …”

Who’d have thought that the impulsive marriage back in 1985 between the flamboyant pop star and the doe-eyed 21-year-old model he’d spotted on a magazine cover would prove to be a rock of ages? The bride wore Benetton because it was the only store open that morning, and received a £30 wedding ring that she has tried repeatedly to lose, “but it always makes its way back to me”.

She says her outfit was “fluffy and horrendous” and that the guest list included “anyone we’d bumped into the night before because we couldn’t organise anything”.

The important thing was there were no paparazzi, apart from a photographer from the local Oxford paper. “We briefly contemplated dodging him,” says Yasmin. “Then we thought, ‘If he can sell these, maybe it will help pay off his mortgage.’ ”

Not long after, in a romantic gesture, Yasmin announced she was walking away from her mega-successful career, only to return just nine months later.

“I mean, what did I think I was going to do?” It was lucky she had work to occupy her because Simon was indulging in his other love at the time: sailing the high seas in Drum, his yacht, which lost its keel in the 1985 Fastnet Race and capsized (“the crew nearly died”). It was rebuilt, and the following year, undeterred, he sailed it Down Under for the Whitbread Round the World Yacht Race. 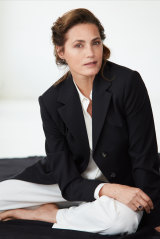 “Somehow Simon and I have created this home that no one wants to leave. It’s the opposite of what you’re meant to do. But I just love having the children around.”Credit:Photography by Adam Whitehead/Telegraph (UK).

These were the days before mobile phones. There was only one ship-to-shore call every so often. So when the UK Sunday paper News of the World splashed some fake news about Simon having an affair with a model in Australia, it wasn’t easy for Yasmin to have a word with him. “It was horrendous. I was staying with my parents and none of us knew how to deal with the press.”

Yasmin had a miscarriage and vowed never to work with a Murdoch publication again. Back then, it was still unusual for an editorial model to do catwalk. Her career is particularly interesting because she pre-dated the supermodel era, which crystallised when Peter Lindberg shot five of them – Linda, Christy, Naomi, Cindy and Tatjiana Patitz – for British Vogue’s January 1990 cover. By then, Yasmin had been going seven years, and had Amber. But she slotted right into the supermodel fold. “Because people knew I’d done dancing lessons, they always wanted me leaping across the studio – on to a concrete floor.” To this day she has debilitating back problems.

The arrival of Saffron in 1991 and Tallulah in 1994 barely slowed her down. Amber even appeared with her on the Chanel catwalk in 1991. Yasmin took the girls everywhere, including on tour with Duran Duran.

Somehow, she managed to hold her own, partying-wise, with the supers. “I was working hard and had the kids, so when I did go out I made sure I had a good time. I think [stories about] drugs in the modelling industry are exaggerated, though. We had to look good and get up early – there was hardly any retouching then, so we couldn’t turn up looking terrible”.

She makes it sound like an ultra-glamorous Hogwarts; they’d stay at The Ritz in Paris. “Most of the parties were either in Naomi’s room – she’d always get left with the mess and the blame – or in the Sabbia Rosa lingerie shop on the Faubourg St Honoré. God, we loved that place.”

“I’m so glad I hung on for dear life in this profession because everyone needs to be represented. It’s ridiculous the amount of positive reaction I get from women my age who hardly ever get to see other 50-something grannies modelling.”

Yasmin believes that frequent absences are one of the reasons her marriage has lasted so long. “The hardest thing about marriage,” she says, “isn’t the rows, it’s the indifference. Luckily Simon makes me laugh, a lot.”

That doesn’t mean being together for so long during lockdown was easy. “He likes to provoke, whereas I sometimes worry about the tone I used to say hello to someone 30 years ago.”

Clearly, they adore one another, foibles and all. Yasmin is already fretting about Duran Duran’s upcoming tour. “He loves it, but it’s knackering. They’re not songs you can just murmur in the background, and he’s centre stage.”

According to Yasmin, over the years, Duran Duran signed “two of the worst deals in recording history … We have a great life and we’re comfortable, but we still have to work.”

But that’s a blessing, too. “I’m so glad I hung on for dear life in this profession,” she says, “because everyone needs to be represented. It’s ridiculous the amount of positive reaction I get from women my age who hardly ever get to see other 50-something grannies modelling.”

Amazon Has Tons of Top-Rated Easter Dresses, and We Found the 8 Best Under $40