Things I love: celebrity engagement rings. Things I don’t love: celebrity breakups. Hollywood relationships are often subject to intense media speculation, so it makes sense why not all A-list lovers make it down the aisle. What’s worse is when those couples think they’re ready to say "I do" only to end up saying "I don’t." There are probably more celebrity couples who broke off engagements than you may realize, and no, they’re not all from the Bachelor franchise (though plenty of Bachelor alums have had to return their Neil Lane sparklers).

Some celebs fall fast and hard before deciding to pump the breaks. Others only decide they’re not a great match after they’ve been engaged for years. There are even a few couples who supposedly tied the knot… only to realize their unions were never official. (#Oops.) Fans may love to see a gorgeous diamond on a celebrity ring finger, but IMO, some A-list proposals should be celebrated with caution. Don’t get me wrong — quick Hollywood engagements have led to long, fulfilling relationships. (I always believed in you, Nick Jonas and Priyanka Chopra.) But whether fans saw them coming or were totally shook, these broken celebrity engagements were definitely devastating. 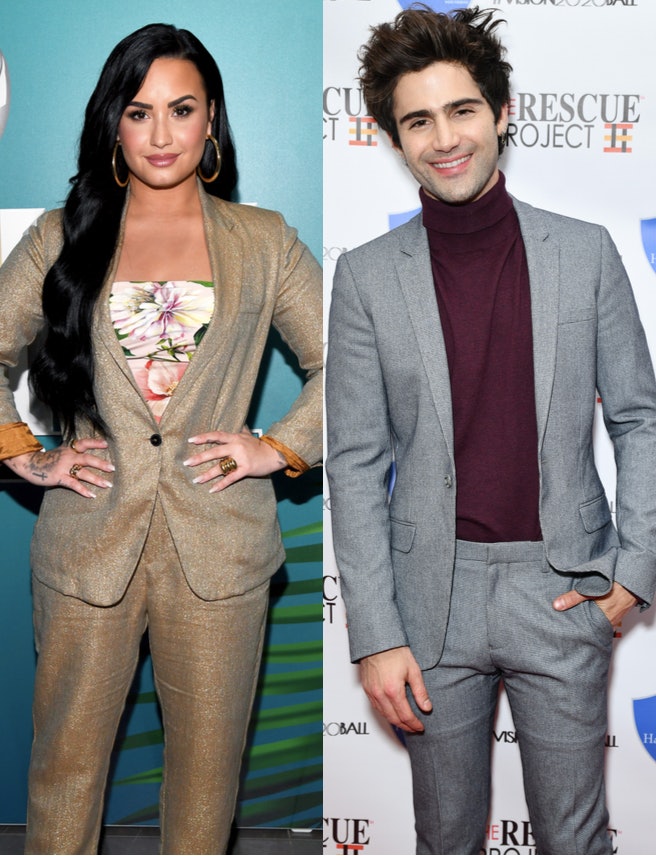 Demi Lovato and Max Ehrich shocked fans when they got engaged on July 2020 after just four months of dating… and unfortunately, no one was all that shocked when they announced their breakup two months later. On Sept. 24, People reportedly claimed the couple had decided to call off their engagement. "It was a tough decision, but Demi and Max have decided to go their separate ways to focus on their respective careers," a source reportedly told People. "They have respect and love for one another and will always cherish the time they spent together." (Elite Daily previously reached out to reps for Lovato and Ehrich for comment on the split but didn’t hear back.) In May 2018, after nearly eight years of dating, Queer Eye‘s Karamo Brown popped the question during his partner Ian Jordan’s birthday party. Sadly, the couple split two years later, and Brown revealed their breakup during a September 2020 appearance on The Ellen DeGeneres Show. "We were distracted by so much — with the kids, and our careers — that during that time, I had to really say, ‘How is our communication? How are other parts of our lives? Are we growing in the same place?’" he explained, later adding, "…eventually I was like, this is a moment where I need to decide, is my happiness important?" (Elite Daily previously reached out to Jordan for comment but did not hear back.) 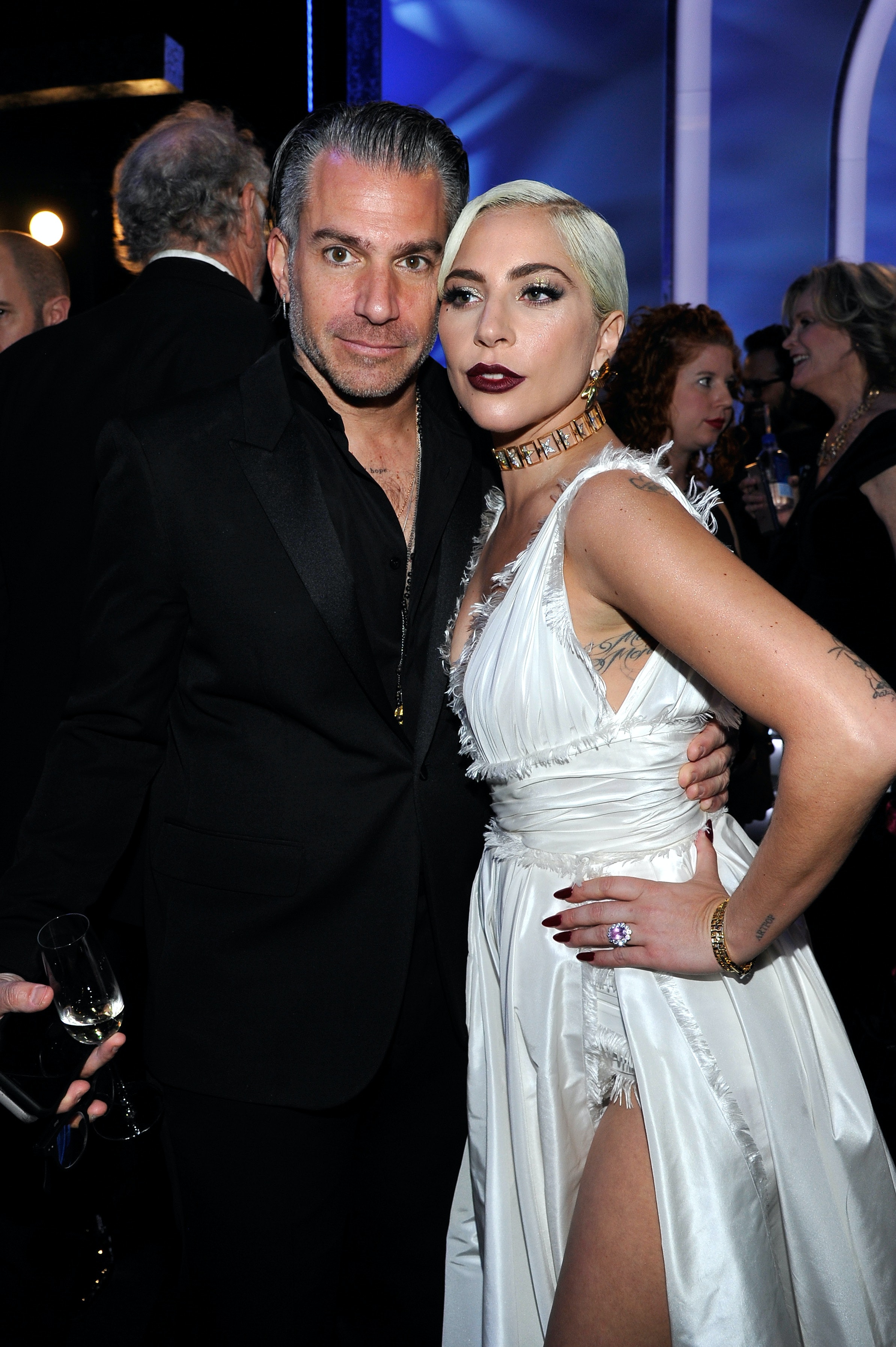 Lady Gaga and talent agent Christian Carino first stepped out together in February 2017, and — after nearly a year of engagement rumors — the singer finally called Carino her "fiancé" in October 2018. Just a few months later in February 2019, People announced the end of Gaga and Carino’s two-year romance.

"Chris didn’t treat Gaga very well toward the end of their relationship," a source for Us Weekly reportedly claimed in March 2019. Another insider for Us Weekly reportedly claimed "Gaga was the one who broke things off." "He was jealous," the insider reportedly added. "He was trying to find her all the time and texted her a lot. Her friends didn’t like him either." (Elite Daily previously reached out reps for Gaga and Carino for comment on the breakup but did not hear back.) Before Carino, Gaga was previously engaged to actor Taylor Kinney. 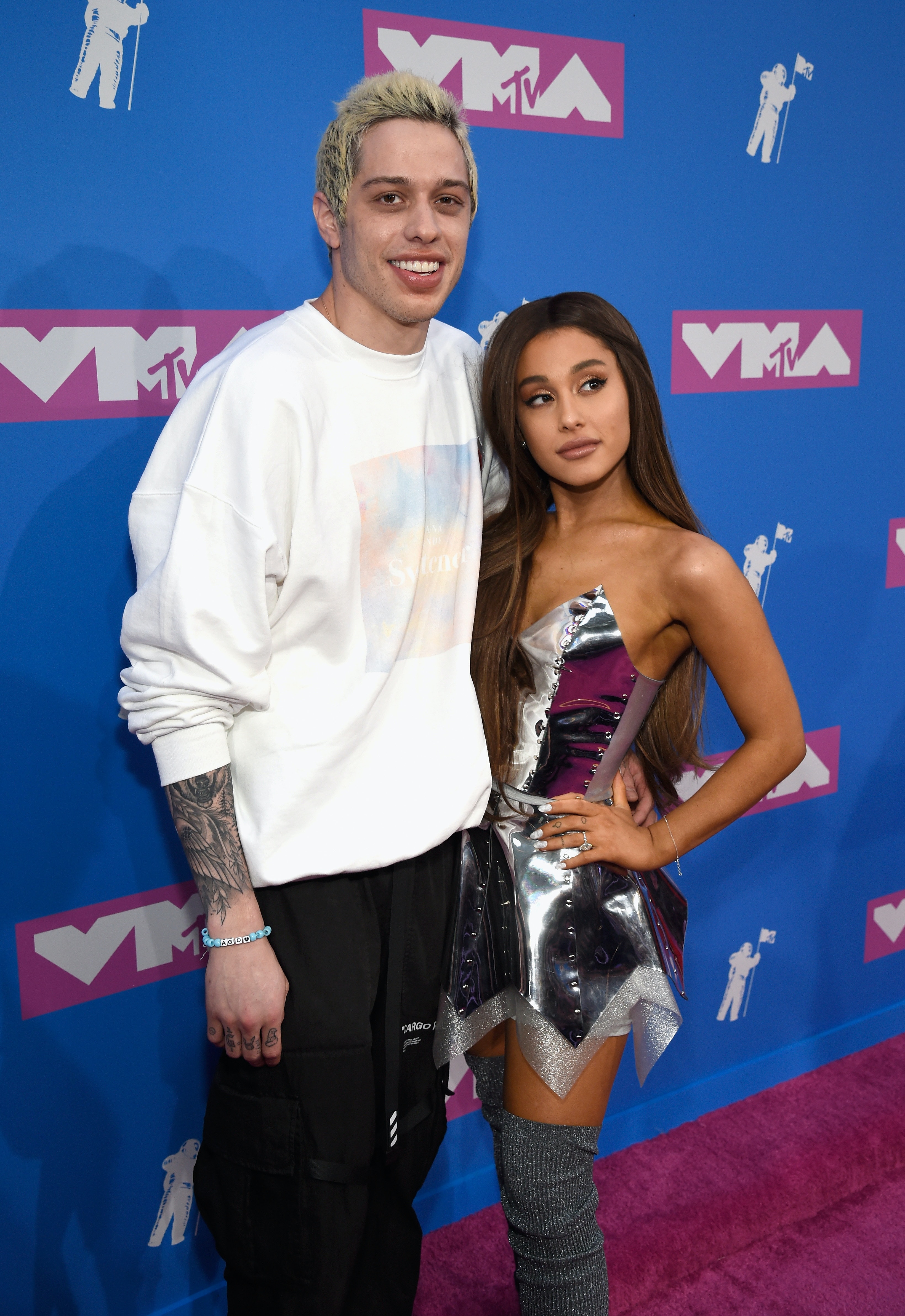 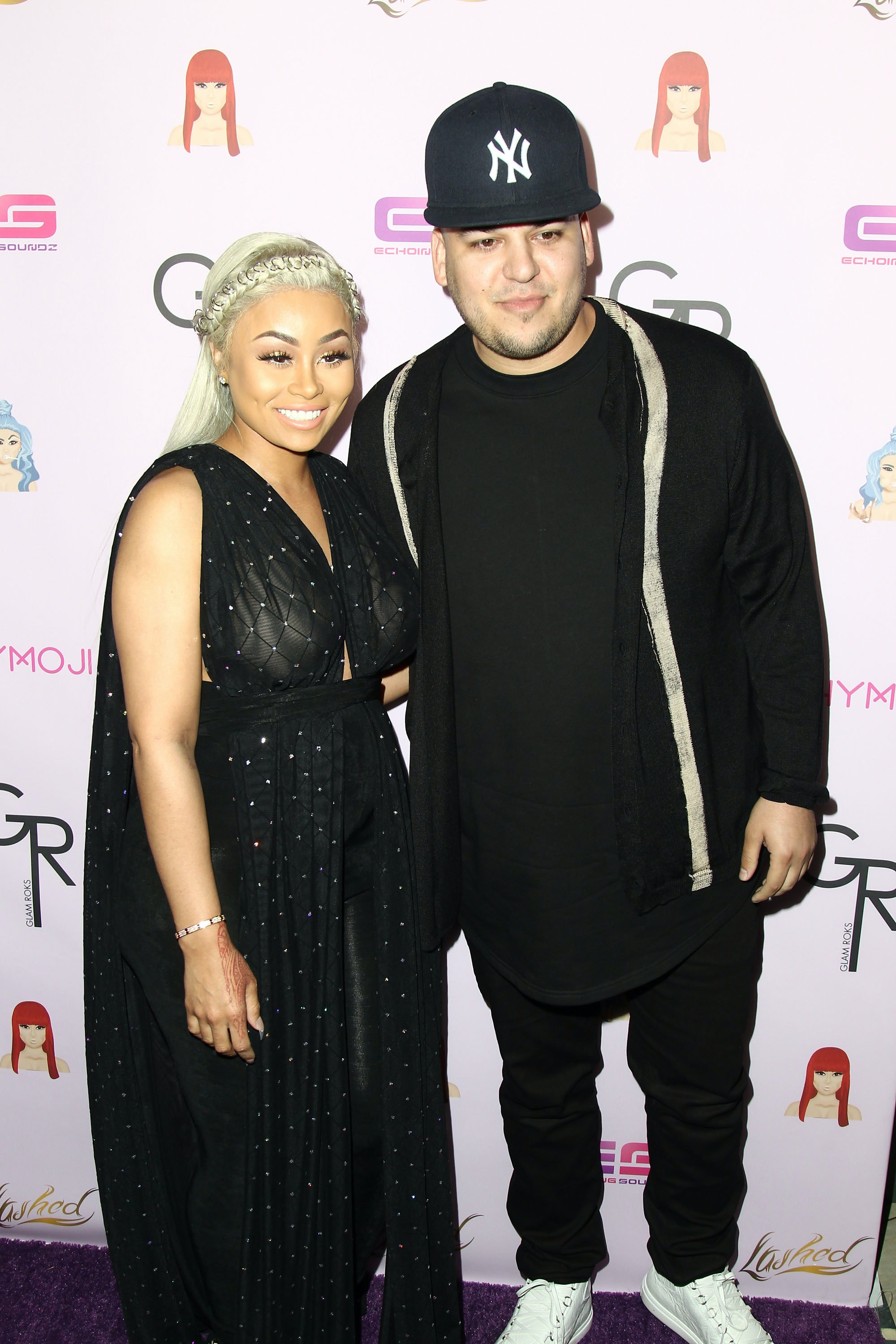 Rob Kardashian first started dating Blac Chyna in January 2016, and after 10 weeks together, Kardashian decided to propose to the model. A month after announcing their engagement, the two had more exciting news: They were expecting a child. Soon after welcoming baby Dream in November 2016, the couple sparked breakup rumors, but those rumors weren’t confirmed until February 2017. "They split a while ago. The wedding plans are off," a source reportedly claimed to People. The two navigated a messy breakup, but they are now amicable co-parents. Robert Pattison and FKA twigs first sparked dating rumors in August 2014, and in April 2015, reports of a rumored engagement surfaced. In July 2017, Pattison claimed he and the singer were only "kind of" engaged during an appearance on Howard Stern’s Sirius XM show, and by October 2017, the engagement was reportedly called off.

"Their travel schedules took a big toll on the relationship," a source reportedly claimed to E! News. "Robert is the one who ended it." Another source for E! News reportedly claimed they ended things due to "timing" issues and added, "They still have love for each other." (Elite Daily previously reached out to Robert and FKA twigs’ teams for confirmation of these reports but did not hear back from Robert’s team. FKA twigs’ representative had no comment.) 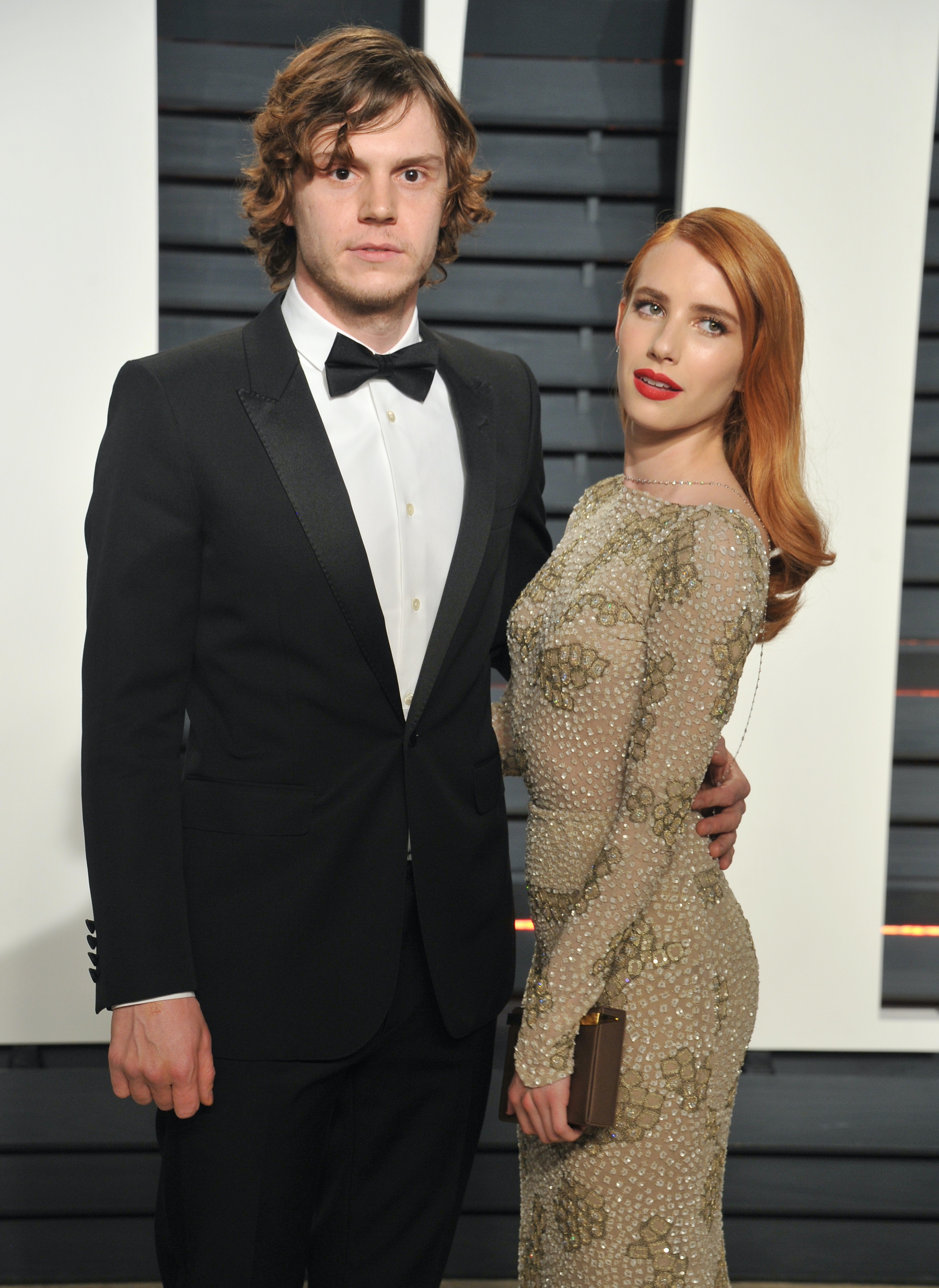 After dating for over a year, actor Evan Peters reportedly proposed to Emma Roberts, his American Horror Story co-star, in December 2013. A year and a half later, a source for Just Jared reportedly claimed the two had decided to go their separate ways. "Their three years together just ran its course," the source reportedly claimed. "They have so many great memories together but couldn’t make it work in the end. The breakup was amicable — there was no drama whatsoever."

Peters and Roberts reportedly made up and broke up twice more before they reportedly ended their engagement for good in March 2019. (Elite Daily previously reached out to Roberts and Peters’ reps for comment on these reports but did not hear back.) 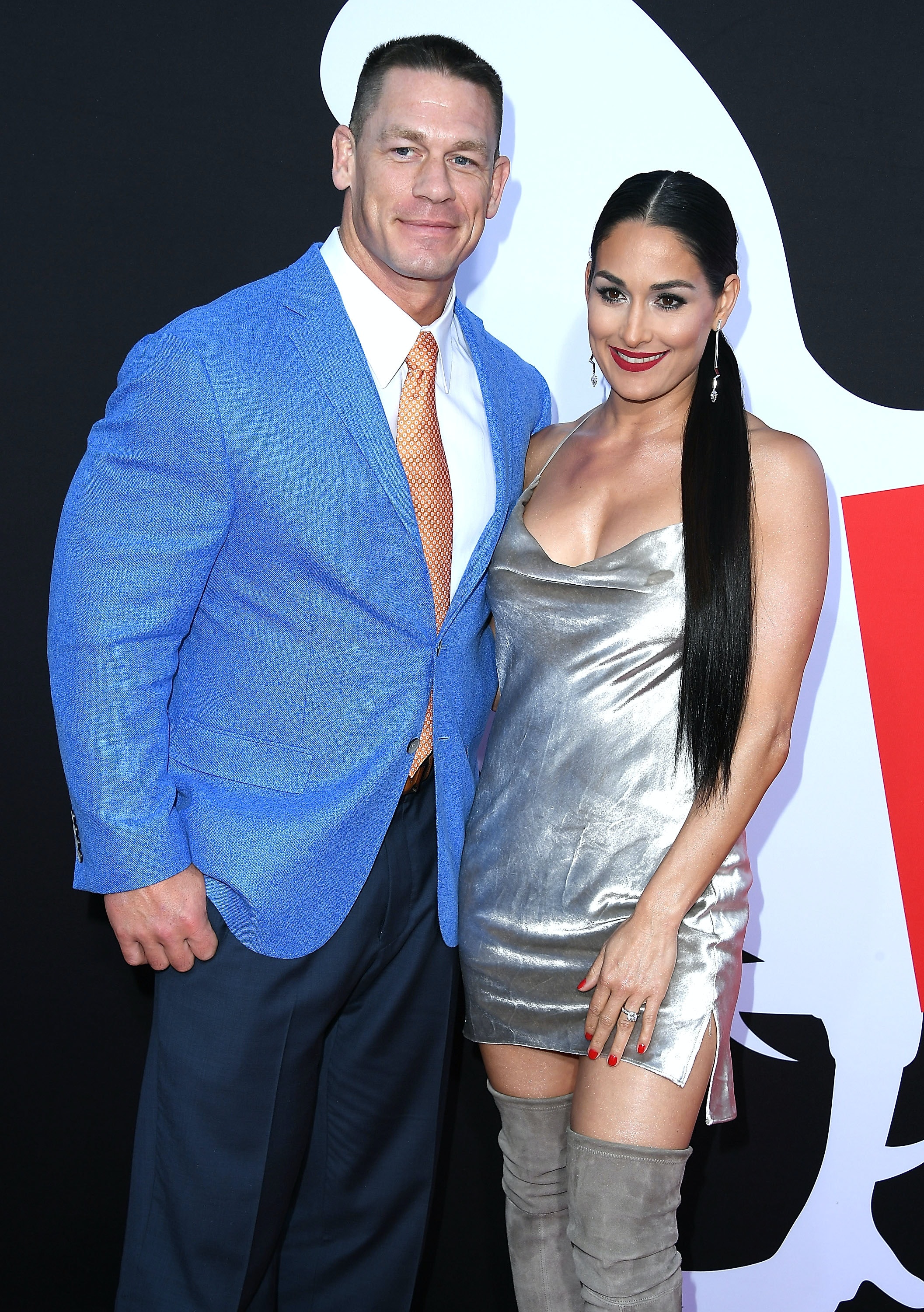 After more than four years together, wrestler-turned-actor John Cena proposed to fellow wrestler Nikki Bella in April 2017 at Wrestlemania 33. Just a year later, the two announced the wedding was canceled just weeks before they were due to get married. "While this decision was a difficult one, we continue to have a great deal of love and respect for one another," the couple told Us Weekly in a statement. "We ask that you respect our privacy during this time in our lives." Cena and Bella reportedly reconciled in May 2018, but by July 2018, the two were done for good. 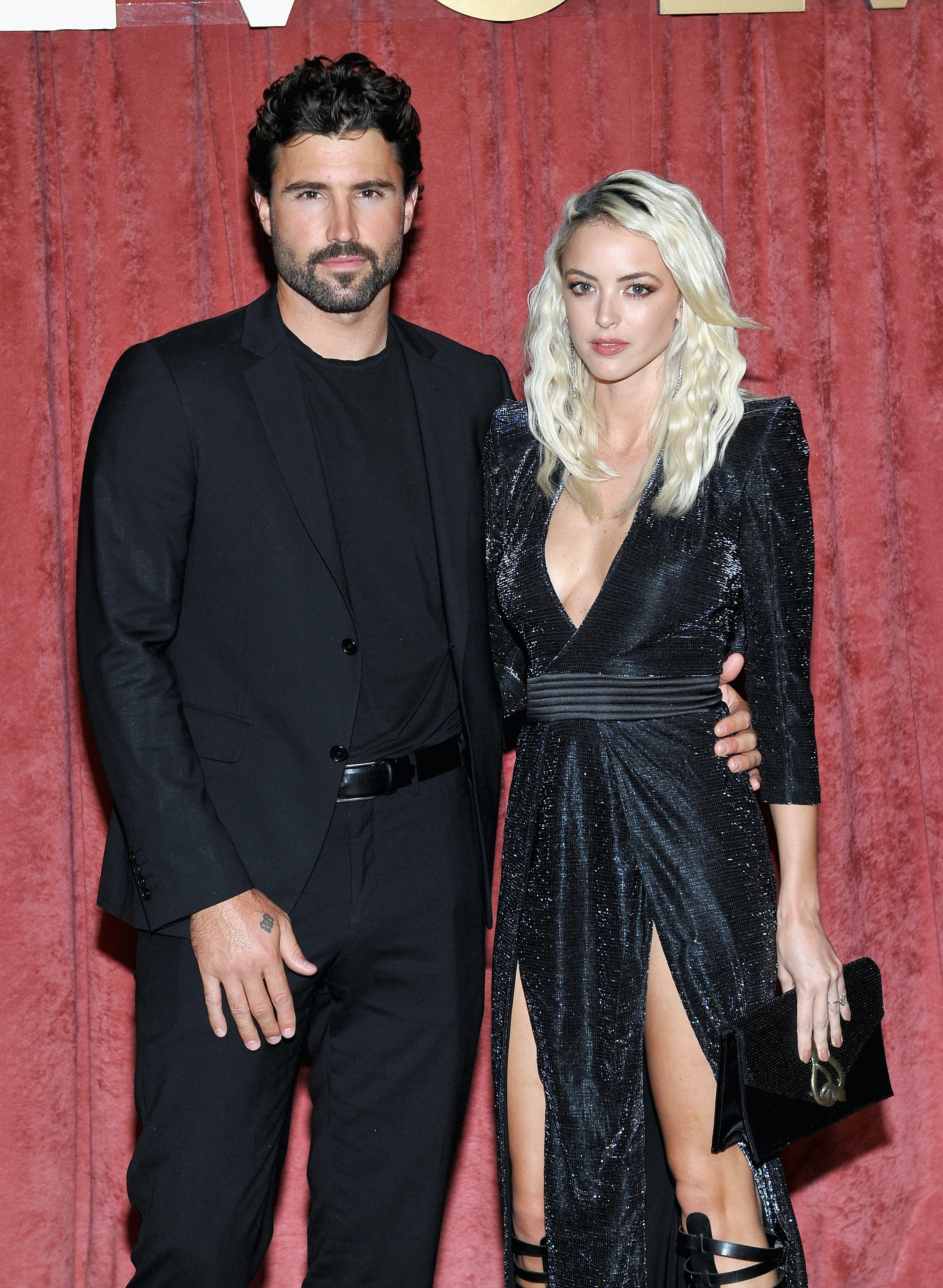 Reality star Brody Jenner first started dating Kaitlynn Carter in October 2013, and after nearly three years together, Jenner popped the question in May 2016. Two years after that, the couple tied the knot in June 2018, but here’s the catch: Per Entertainment Tonight, Jenner and Carter reportedly weren’t legally married, as the wedding took place in Indonesia. In August 2019, reps for the couple announcement their breakup in a statement to People. According to the reps, filming The Hills: New Beginnings "magnified a lot of things" and made it clear "things weren’t going to work." 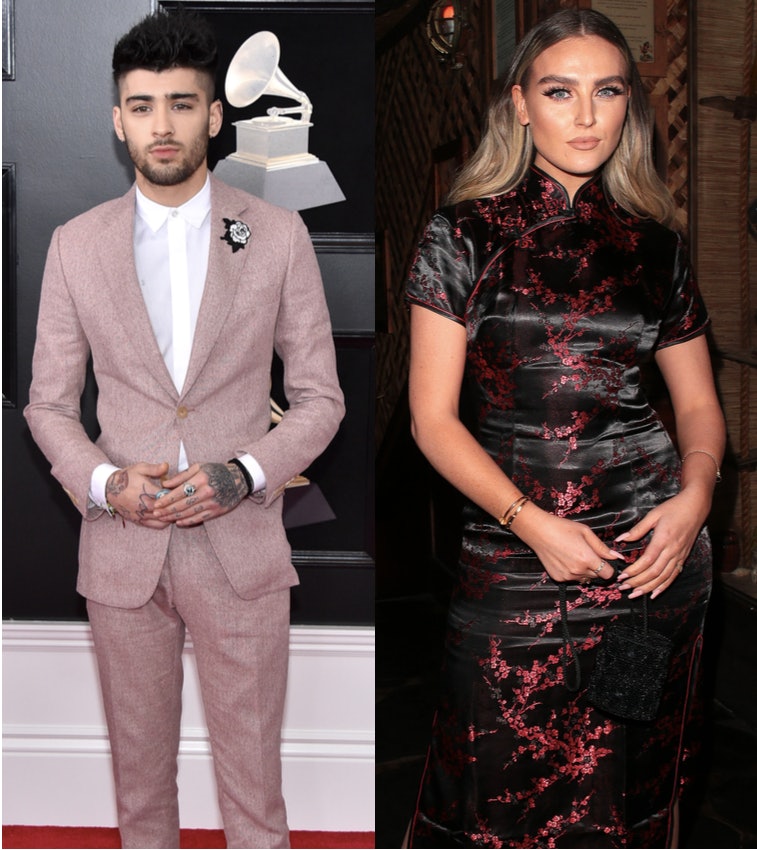 One Direction alum Zayn Malik’s relationship with Little Mix’s Perrie Edwards began in 2011, and after two years of dating, the two singers became engaged in August 2013. The couple was engaged for two years before Malik reportedly ended the relationship, as Edwards later claimed in Little Mix’s 2016 book, Our World. "It was horrible, the worst time of my life," Edwards said of the breakup. "A four-year relationship, two-year engagement ended by a simple text message. Just like that. Even though things my career were going really well, it was incredibly difficult for me." (Elite Daily reached out to Malik’s rep for comment on Edwards’ claims but didn’t hear back in time for publication.) Though they’re certainly not the first Bachelor couple to call off an engagement, they are the most recent. Season 14 Bachelorette Becca Kufrin met Garrett Yrigoyen when filming for the season began in March 2018, and two months later, Yrigoyen proposed during the season finale. Two years after becoming engaged, Yrigoyen sparked controversy by showing support for police officers in June 2020 amid nationwide Black Lives Matter protests. Though Kufrin initially stood by her fiancé, she eventually decided to call off the engagement.

"After many conversations, we came to this decision," she said during the Sept. 1 episode of her Bachelor Happy Hour podcast. "It wasn’t something that we just arrived at one night. It wasn’t based solely off of one Instagram post or somebody else’s opinions or comments. There’s much more to it. To any relationship, there’s a lot of layers, and it’s not for me to divulge details." (Elite Daily previously reached out to Yrigoyen for comment on Kufrin’s claims but didn’t hear back.) 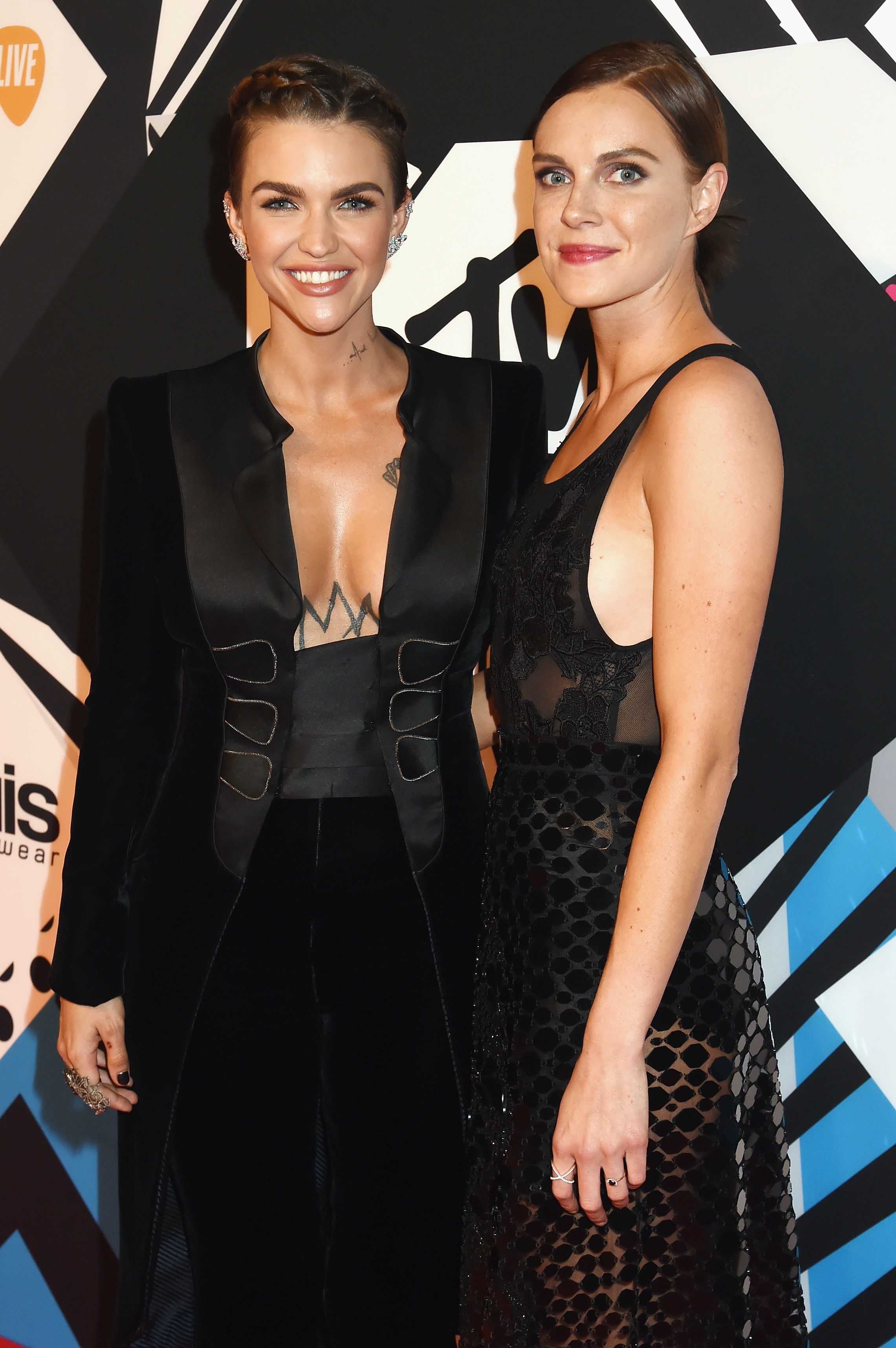 After three months of dating, actor Ruby Rose proposed to fashion designer Phoebe Dahl in March 2014, but the engagement was short-lived. In December 2015, the two shocked fans by announcing their decision to call off their engagement. "After two wonderful years together, Ruby and I have decided to part ways," Dahl said in a statement to Us Weekly. "While we still love each other and support each other in every way, it is our mutual decision to part ways. Our break is not the result of any media speculation, and we want nothing but the best for each other." Before Dahl, Rose was previously engaged to model Catherine McNeil. 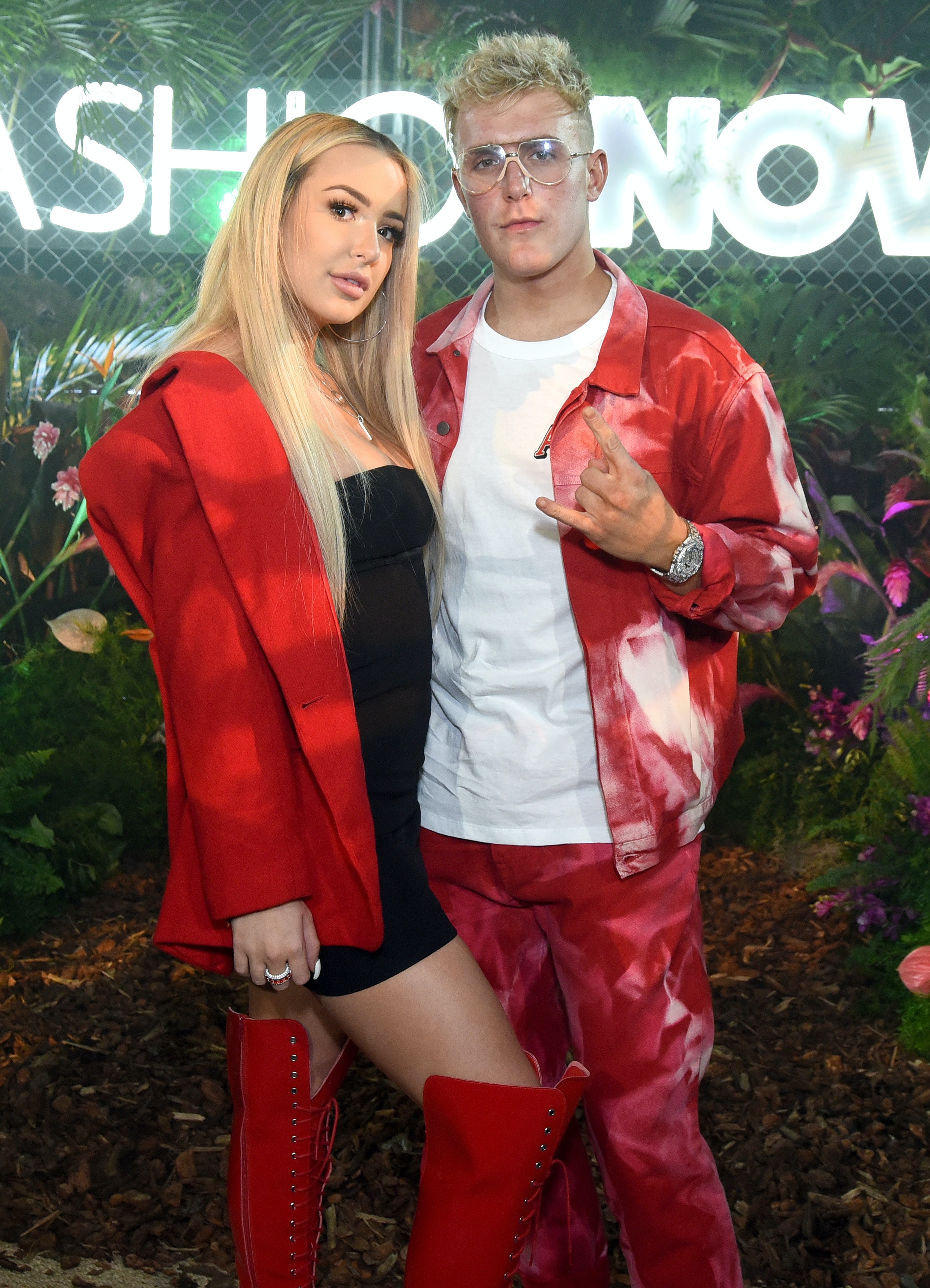 YouTubers Tana Mongeau and Jake Paul began their whirlwind romance in April 2019, and just two months later, Paul proposed on Mongeau’s 21st birthday. In July 2019, the couple supposedly tied the knot in Las Vegas, but Mongeau later revealed the wedding wasn’t legally binding. In January 2020, fans weren’t too surprised when the couple announced they were taking a break.

A few days before announcing their split, Mongeau revealed how their relationship had changed since the Vegas ceremony. "I think the second he said ‘I do,’ to me, he was like, ‘Now what?’" she said. "I think he was also over it. I don’t blame him, but it left me clinging, trying to make this work." (Elite Daily previously reached out to Paul for comment on Mongeau’s claims but didn’t hear back.)

I guess it’s better to have loved and lost than to have never loved at all.

We Found Christian Louboutin Pumps for 50% Off — Seriously!