The Greens will push for Labor to establish a $250 million Truth and Justice Commission to oversee an Indigenous truth-telling process if the minor party secures the balance of power in this year’s federal election.

The move would put pressure on a minority Labor government to change its Indigenous affairs priorities so truth-telling and treaty-making come before the establishment of a Voice to Parliament. Labor has ruled out forming a minority government with the Greens. 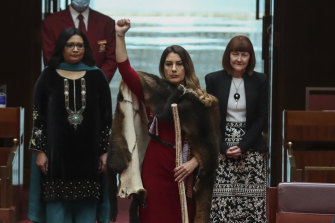 Senator Lidia Thorpe at her swearing-in ceremony to the Senate in October, 2020.Credit:Alex Ellinghausen

Greens First Nations spokeswoman Lidia Thorpe, a DjabWurrung, Gunnai and Gunditjmara woman, said the proposed commission would investigate historic and contemporary examples of human rights abuses and wrongdoing. It would also provide recommendations on how to heal from these incidents.

“We need to explore, understand, and reckon with our past and the impact it continues to have on First Nations people,” Senator Thorpe said.

“Guided by the work of the Truth and Justice Commission, the next step in our journey towards a Treaty involves engaging and involving the community in developing the Treaty or Treaties via a national consultation and engagement process.”

Labor has committed to the calls of the 2017 Uluru Statement from the Heart and has promised to constitutionally enshrine a Voice to Parliament if elected at the next poll, due by May.

Alongside this, the party has also promised to establish a Makarrata Commission to oversee truth-telling and treaty projects as a matter of priority – but it has not committed to a firm funding figure.

While the Greens have also committed to the Uluru Statement, their official policy is for a truth-telling and treaty process to come first and for a Voice model to be decided later through a treaty process.

According to costings done for the Greens by the Parliamentary Budget Office the party hopes for a treaty to be established by 2032.

“Until we tell the truth about our past and strike a Treaty with First Nations owners that recognises their sovereignty, there will be a painful hole in the centre of our democracy,” said Greens leader Adam Bandt.

The fresh calls for a formal truth-telling process come just days before Australia Day, 234 years since the First Fleet arrived at Sydney Cove.

While it is a day of national celebration for many, it remains controversial for others – both Indigenous and non-Indigenous – who note that it marks the beginning of European colonisation, and the dispossession and oppression of First Nations people.

"Our painful and ongoing legacy of colonisation hasn't properly recognised the sovereignty of the First People of this continent," Senator Thorpe said.

"A Treaty would be an opportunity for us to learn the truth and shape the future of the country we all deserve.”

The Coalition has ruled out constitutionally enshrining a Voice to Parliament, instead promising to legislate one before the election. The government is aiming to introduce legislation early this year, but there are doubts this will happen given the limited number of sitting days before May.

The Coalition has also failed to hold a referendum to recognise Indigenous people in the constitution despite it being an official policy promised at every election since 2007.