Before artist Sidney Nolan became well-known for his Ned Kelly works – a series of paintings depicting the famous bushranger as a simplified series of dark squares and rectangles set against colourful backdrops – he was an army deserter living in an artistic paradise of sorts.

In the late 1930s Nolan met art patrons John and Sunday Reed. By the early 1940s he was living with them, producing a prodigious amount of art, and he and Sunday were entangled in an open and torrid love affair. Their home – now the Heide Museum of Modern Art in Melbourne’s east – was where he began to experiment and develop as an artist. Now a rare collection of 47 works produced by Nolan during this period are going up for auction. 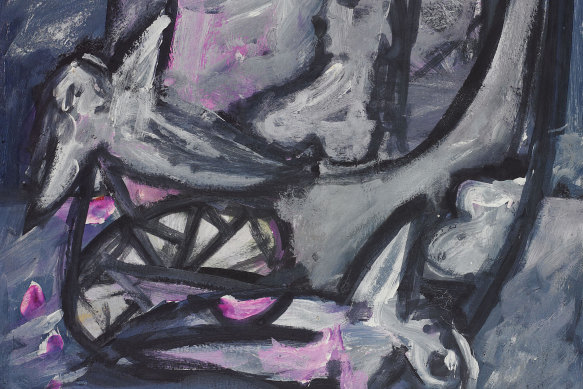 Angels and Figure (1941) by Sidney Nolan

Valued collectively at around $500,000, these pieces give a glimpse into the life and mind and development of Nolan in his earliest days as an artist, before he became famous, and before the implosion of his relationship which saw him leave Sunday Reed, Heide, and these works behind.

It’s an eclectic bunch, ranging from landscapes to prints to abstract. Some were included in his first exhibition, held in a newsagency window in Fairfield, and none were sold at the time. 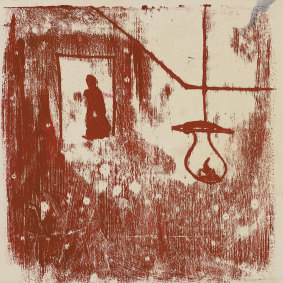 Figures in an interior with hanging lamp, Kelly Series (1947) by Sidney Nolan.

Alex Clark, Australian and International Art Specialist at Bonhams auction house, highlights how unusual it is for so many works from this period to come up for sale together. Nolan was prolific across his career, “so there’s always works coming up – but these early works don’t come up that often, and not in a context like this, where it’s a large group of unique works.”

“A lot of people probably know him for his post ’60s works, which is when he became really famous, both nationally and internationally, but not many people are as familiar with his earlier works from the late ’30s, through to the mid ’40s.”

Pieces from this personal archive have been sold off here and there across the years, but “these particular works have been held back by the estate because they’re rather important early works,” says Clark. 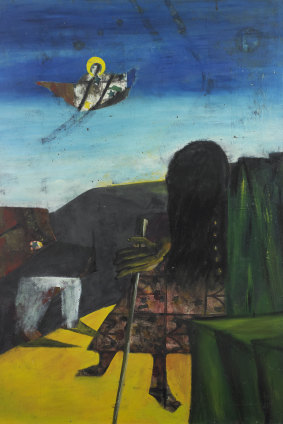 He points to an unassuming work called Kiewa Valley as a piece of particular interest. On the front is a relatively sedate landscape – on the back, however, there is an inscription from Sunday Reed saying goodbye.

Figure and Angel from 1946 also has more going on than a first glance would suggest. If you take a closer look at the figure in the foreground you can see that there’s a ghost of an older work just below the surface. “[Figure and Angel] has been painted over the top – and underneath you can see the remnants of another picture, which has a lot of similarities to work painted that same year from the Kelly series. So it’s quite a very intriguing work.”

The collection also reflects the scarcity of materials of the era – there are works on cardboard, on paper, on boards, and even on hessian.

Ahead of the auction on August 23 an exhibition of the works will be touring both Melbourne and Sydney, each for a few days only. It’s a chance for potential bidders to get a feel for the pieces in real life, but it’s also a chance to see these rare works together, most likely for the last time, before many of them disappear into homes and private collections, possibly forever.

I couldn’t find support for LGBT Black dads like me, so I started my own group

‘Doula’ Review: Chris Pine-Produced Pregnancy Comedy Is a Labor of Love, Just Not a Very Funny One

Nearly half of employees believe they aren't paid what they're 'worth'